Cooper, the Defense Department’s deputy assistant secretary for Russia, Ukraine and Eurasia, and Hale, the undersecretary of state for political affairs, testified into Wednesday evening following Sondland's morning hearing. Hale is the No. 3 State Department official. It was the fourth of five impeachment hearings this week.

Cooper testified that the Ukrainian embassy was asking questions of her staff about a hold on military aid as far back as July 25, the day Trump asked Ukraine’s president to investigate Democrats.

She told lawmakers her staff showed her emails she had not yet seen when she testified behind closed doors last month in the impeachment probe looking into Trump’s dealings with Ukraine. 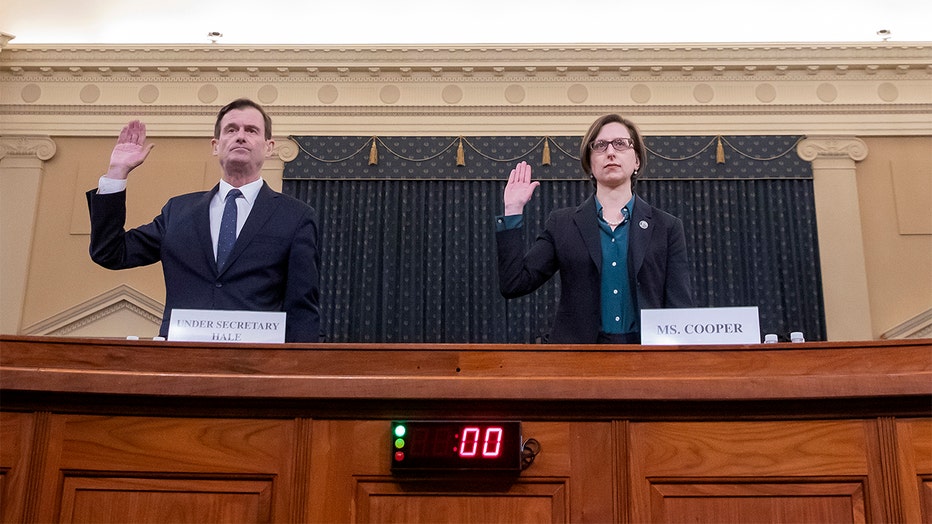 David Hale (L), under secretary of state for political affairs and Laura Cooper, deputy assistant secretary of defense for Russia, Ukraine, and Eurasia, are sworn in before testifying before the House Intelligence Committee in the Longworth House Off

Cooper said her staff received an email on July 25 from a Ukrainian embassy contact asking "what was going on with Ukraine's security assistance."

She said she "cannot say for certain" that Ukraine was aware the aid was being withheld, but said "it's the recollection of my staff that they likely knew.“

Republicans have argued there was no “quid pro quo” — investigations into Democrats for military aid — if Ukrainians weren’t aware of a hold on the aid.

“Your testimony today destroys two of the pillars of the president’s defense,” said Rep. Eric Swalwell, D-Calif. “The first pillar: No harm no foul. The Ukrainians didn’t know that the hold was in place, so it didn’t really hurt them. The second pillar: This president was a real champion of anti-corruption.”

Trump’s July 25 call with Ukrainian President Zelenskiy occurred in the morning in Washington. After Zelenskiy pressed for the military aid, Trump suggested Ukraine “look into” Joe Biden and his son Hunter, who was on the board of a huge Ukrainian natural gas company.

Cooper also said she became aware in July that a hold was being placed on military aid to Ukraine -- and it had been directed by Trump. 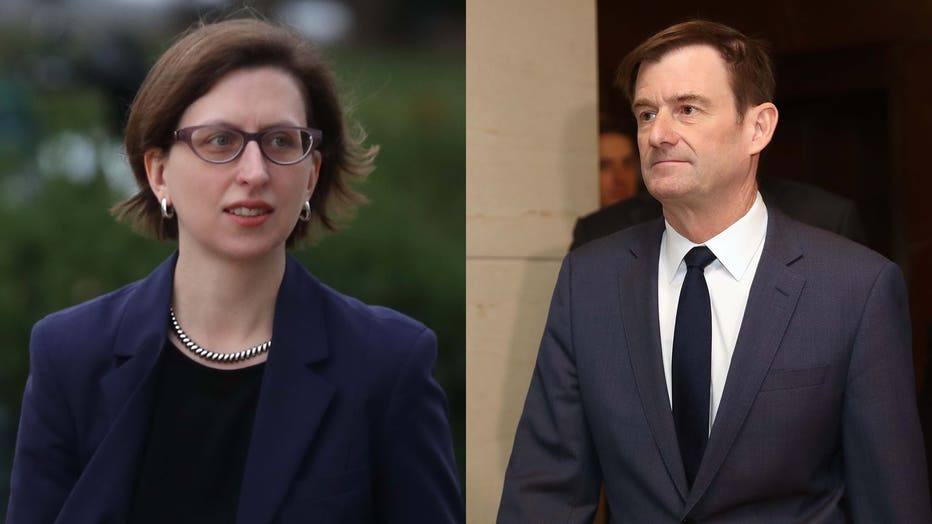 Cooper said she never spoke to the president about the hold, but she heard the hold was placed because of his concerns over corruption in Ukraine.

The DOD’s deputy assistant secretary for Russia, Ukraine and Eurasia said the funds were critical to supporting Ukraine. She said she was under the impression that the money was legally required to be obligated by Sept. 30, the end of the fiscal year, and she fought to get it done.

The embassy’s July questions show Ukrainians were aware of a possible hold on the aid earlier than previously known.

In closed-door testimony on Oct. 23, Cooper told investigators that, in a series of July meetings at the White House, she came to understand that Trump's acting chief of staff, Mick Mulvaney, was holding up the military aid for the U.S. ally.

RELATED: ‘Everyone was in the loop’: Gordon Sondland testifies in Trump impeachment hearings on Ukraine dealings

"There was just this issue of the White House chief of staff has conveyed that the president has concerns about Ukraine," she said.

When she and others tried to get an explanation, they found none.

"We did not get clarification," Cooper said, a senior official who oversees Ukraine policy.

"My sense is that all of the senior leaders of the U.S. national security departments and agencies were all unified in their — in their view that this assistance was essential," said Cooper. "And they were trying to find ways to engage the president on this."

Cooper’s closed-door deposition last month was delayed after more than two dozen Republican House members held a news conference outside the secure room where the deposition was taking place and then pushed into the committee room, bringing the session to a halt.

Hale, the State Department’s third-ranking official, testified before House investigators on Nov. 6 in a closed-door session. He reportedly said Secretary of State Mike Pompeo and other senior officials did not want to defend ousted Ambassador Marie Yovanovitch because it would hurt the effort to free up U.S. military assistance to Ukraine.

Democrats say Trump demanded that Ukraine investigate his Democratic rivals in return for U.S. military aid it needed to resist Russian aggression and that may be grounds for removing the 45th president. Trump says he did no such thing in his July 25 call with President Volodymyr Zelenskiy and the Democrats just want him gone.

On Wednesday morning, Sondland, the ambassador to the European Union, said he worked with Rudy Giuliani on Ukraine at the “express direction” of President Donald Trump and pushed a “quid pro quo” because it was what Trump wanted.