Tanker trucks arrived for filling with liquid oxygen in Visakhapatnam, India, on April 22, part of the country's effort to help with dangerously low levels at hospitals. Credit - RINL via Storyful

NEW DELHI - India reported the world’s highest number of new COVID-19 infections reported in a single day on Thursday as the country faces a troubling coronavirus surge that has overwhelmed its health care system, leading to critical shortages of hospital beds and oxygen.

The 314,835 new virus infections added in 24 hours raised India's total to over 15.9 million cases since the pandemic began. It's the second-highest total in the world next to the United States, which has reported more than 38.1 million total cases, according to data from Johns Hopkins University.

Virus-related deaths also rose by 2,104 over the past 24 hours, raising India's overall death toll to 184,657, the Health Ministry said. 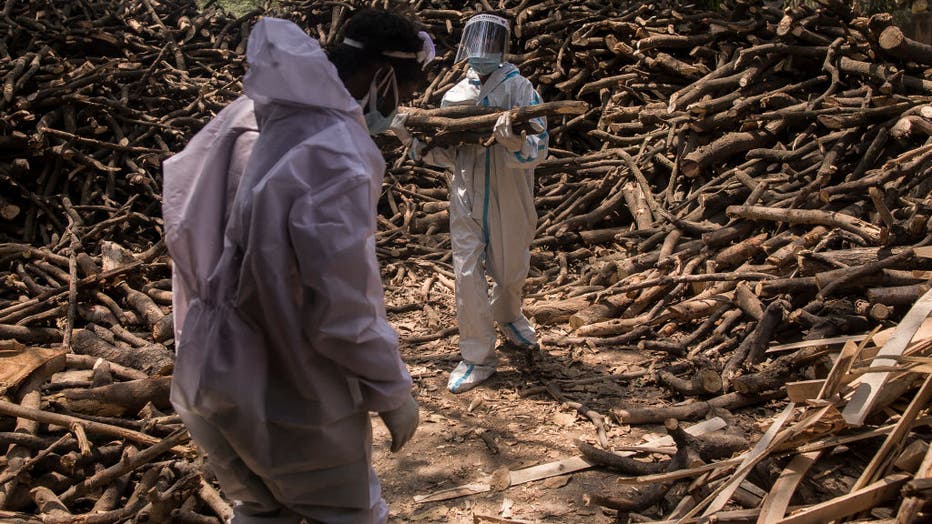 Cemetery workers wearing PPE sort logs of wood for the funeral pyres to perform the last rites of the patients who died of the COVID-19 on April 22, 2021 at a crematorium in the outskirts of New Delhi, India. (Photo by Anindito Mukherjee/Getty Images

India, which has a population of nearly 1.4 billion people, is also now facing acute shortages of hospital beds and medicines, and hospitals have also reported dangerously low levels of oxygen. The New Delhi High Court on Wednesday ordered the government to divert oxygen from industrial use to hospitals to save people’s lives.

"You can't have people die because there is no oxygen. Beg, borrow or steal, it is a national emergency," the judges said, responding to a petition by a New Delhi hospital seeking the court's intervention.

The government is rushing oxygen tankers to replenish supplies to hospitals. Video shared early Thursday showed several trucks arriving with liquid oxygen in the port city of Visakhapatnam as part of the efforts, bound for India’s second-most populous state of Maharashtra — home to the financial capital of Mumbai.

Indian Health Minister Harsh Vardhan said that "demand and supply is being monitored round the clock." He said in a tweet that to address the exponential spike in demand, the government has increased the quota of oxygen for the seven worst-hit states.

Lockdowns and strict curbs have brought pain, fear and agony to many people in India’s capital of New Delhi and other cities.

On Monday night, New Delhi imposed a weeklong lockdown amid the explosive surge in cases. In scenes familiar from surges elsewhere, ambulances catapulted from one hospital to another, trying to find an empty bed over the weekend, while patients lined up outside waiting to be let in. Ambulances also idled outside of crematoriums, carrying half a dozen dead bodies each.

Doctors and officials say the lockdown measures are necessary to ease pressure on the fragile health system, which has been underfunded for decades.

RELATED: India's capital to lock down amid devastating coronavirus surge

"I get numerous calls every day from patients desperate for a bed. The demand is far too much than the supply," said Dr. Sanjay Gururaj, a doctor at Bengaluru-based Shanti Hospital and Research Center.

"I try to find beds for patients every day, and it’s been incredibly frustrating to not be able to help them. In the last week, three patients of mine have died at home because they were unable to get beds. As a doctor, it’s an awful feeling," Gururaj said.

Yogesh Dixit, a resident of northern Uttar Pradesh state, said earlier this week that he had to buy two oxygen cylinders at 12,000 rupees ($160) each, more than twice the normal cost, for his ailing father because the state-run hospital in Lucknow had run out of supplies.

He bought two "because the doctors can ask for another oxygen cylinder at any time," he said, adding that he had to sell his wife’s jewelry to meet the cost.

The main cremation ground at Lucknow, the state capital, received nearly 200 bodies on Sunday. "The bodies were everywhere, they were being cremated on sidewalks meant for walking. I have never seen such a flow of dead bodies in my life," said Shekhar Chakraborty, 68.

It also said that 75 railroad coaches in the Indian capital have been turned into hospitals providing an additional 1,200 beds for COVID-19 patients.

Cases in India had dipped for 30 consecutive weeks before starting to rise in mid-February, and experts say the country failed to seize the opportunity to augment healthcare infrastructure and aggressively vaccinate.

Critics have also pointed to the government deciding to not pause Hindu religious festivals or elections, and experts say that these may have exacerbated the surge.

"Authorities across India, without exception, put public health priorities on the back burner," said K Srinath Reddy, president of the Public Health Foundation of India.

India said last week it would allow the use of all COVID-19 shots that have been greenlit by the World Health Organization or regulators in the United States, Europe, Britain or Japan.

On Monday, it said it would soon expand its vaccination program from people aged 45 to include all adults, some 900 million people — well more than the entire population of the entire European Union and U.S. combined.

The surge in India has also weighed heavily on the global efforts to end the pandemic since the country is a major vaccine producer but has been forced to delay exports of shots abroad, hampering campaigns in developing countries in particular.