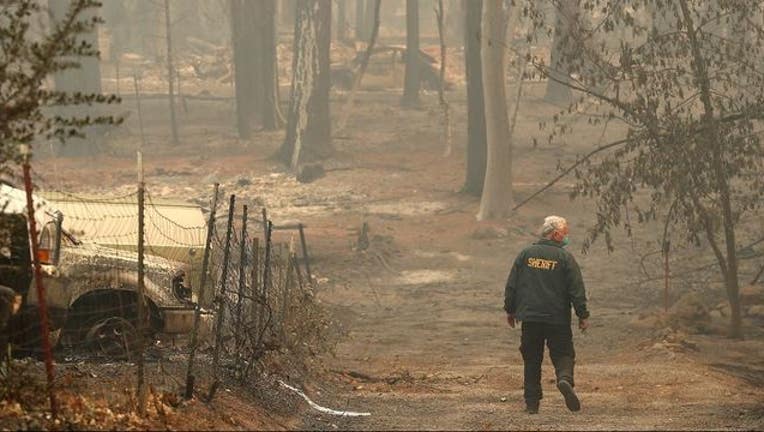 PARADISE, Calif. (AP) - Costs associated with a deadly Northern California wildfire will likely be in the billions, U.S. Interior Secretary Ryan Zinke said Monday as he returned to the town of Paradise, saying he has never witnessed such devastation.

"There's a lot of things I'd rather spend this federal money on rather than repairing damage of things that have been destroyed," he said. Zinke nodded to other public services, such as improving visitor experiences at Yosemite National Park or thinning forests as options for the money.

No additional remains were found Monday, but the wildfire's death toll rose to 88 after investigators determined that three separate sets of human remains contained remains from more than one person.

Butte County Sheriff Kory Honea said 203 names remain on the list of those unaccounted for after the Camp Fire swept through the rural area 140 miles (225 kilometers) north of San Francisco. He released the names of 16 people who died in the blaze, ranging in age from 58 to 95.

The pace of newly discovered remains has slowed in recent days, and Honea said searchers are making "good progress" as they methodically sweep through any property where people may have died.

"The remains that we are now recovering are now remains that were almost completely consumed by the fire," he said. Anthropologists are sifting through bone fragments to help coroners identify the remains, he said.

Though he has declined to characterize how much of the area has been searched, Honea said that highly populated areas and places that were identified as possibly having deceased people have been fully searched and search teams are now spreading out into less dense areas of devastation.

The U.S. government has distributed more than $20 million in assistance for people displaced by the catastrophic wildfire in Northern California, a Federal Emergency Management Agency official said Monday as hundreds of searchers kept looking for more human remains.

The massive wildfire that destroyed nearly 14,000 homes in the town of Paradise and surrounding communities was fully contained over the weekend after igniting more than two weeks ago.

FEMA spokesman Frank Mansell told The Associated Press that $15.5 million has been spent on housing assistance, including vouchers for hotel rooms. During an interview in the city of Chico, he said disaster response is in an early phase but many people will eventually get longer-term housing in trailers or apartments.

FEMA also has distributed $5 million to help with other needs, including funeral expenses, he said.

About 17,000 people have registered with the federal disaster agency, which will look at insurance coverage, assets and other factors to determine how much assistance they are eligible for, Mansell said.

Meanwhile, the list of people who are unaccounted for has dropped from a high of 1,300 to the "high 200s" Monday, Butte County Sheriff Kory Honea said. He said the number of volunteers searching for the missing and dead has been reduced to about 200 Monday from 500 Sunday after many of those reported missing were found over the weekend.

"We made great progress," Honea said.

U.S. Agriculture Secretary Sonny Perdue joined Zinke on a tour of Paradise, which was decimated by the fire that ignited in the parched Sierra Nevada foothills Nov. 8 and quickly spread across 240 square miles (620 square kilometers).

Perdue suggested donating timber from the nearby Plumas National Forest to rebuild Paradise.

Zinke and Perdue's trip to Paradise marks their latest in a series of efforts to promote their message that lawsuits from environmentalists and government red tape stand in the way of thinning overgrown forests and mitigating the severity of wildfires in the future. The duo spoke to reporters in a conference call last week, and Zinke promoted a similar message on an earlier visit to Paradise.

The firefight got a boost last week from the first significant storm to hit California this year, which dropped several inches of rain over the burn area without causing significant mudslides.