Irene Luevano's family is mourning her loss after her disappearance turned into a murder investigation. FOX 10's Justin Lum reports.

PHOENIX - Irene Luevano, a 37-year-old woman who was reported missing on Jan. 16, has been found dead, and her boyfriend faces charges for her murder.

"Earlier today, January 20, Phoenix Police investigators located the remains of Ms. Luevano. The discovery was made in a remote area of La Paz County off Hovatter Road and the I-10 freeway. There was obvious trauma to her body," read a portion of the statement released by Phoenix Police.

The body was reportedly found in or near an unincorporated community called Salome.

Luevano was last seen with her boyfriend, Jorge Lara, who had been arrested and booked for unrelated alleged criminal offenses. According to authorities, she told her family she had been stabbed in the neck before her disappearance.

Since the discovery of Luevano's body, Lara has confessed to stabbing the mother in the neck while driving, according to court documents.

Police said Luevano had tried to run away after the attack, but Lara captured her and put her back into the car before driving out to western Arizona. She tried to fight back and stabbed him with the knife, but was overpowered and killed, according to court documents.

Officials say Lara had gone to a Valley hospital that same morning with a stab wound to the stomach, claiming he had been robbed. He had originally denied ever fighting with Luevano.

A witness, identified as Diego Teran, admitted to being with Lara at the time of the murder. He said the boyfriend had planned to kill her as they drove into the desert, and he saw Lara stab her repeatedly before hiding the body.

Teran had guided investigators to her remains, police say. He and Lara had been living together as roommates.

"During the interview, Diego admitted to lying to officers that came to his door on 1/16/2022 because before the murder, Jorge threatened to kill Diego's family if he said anything," court documents stated.

Lara now faces multiple charges, including first degree murder, concealing a dead body, assault and kidnapping. His bond has been set at $1 million.

Teran has been booked into jail and is being accused of hindering the investigation. 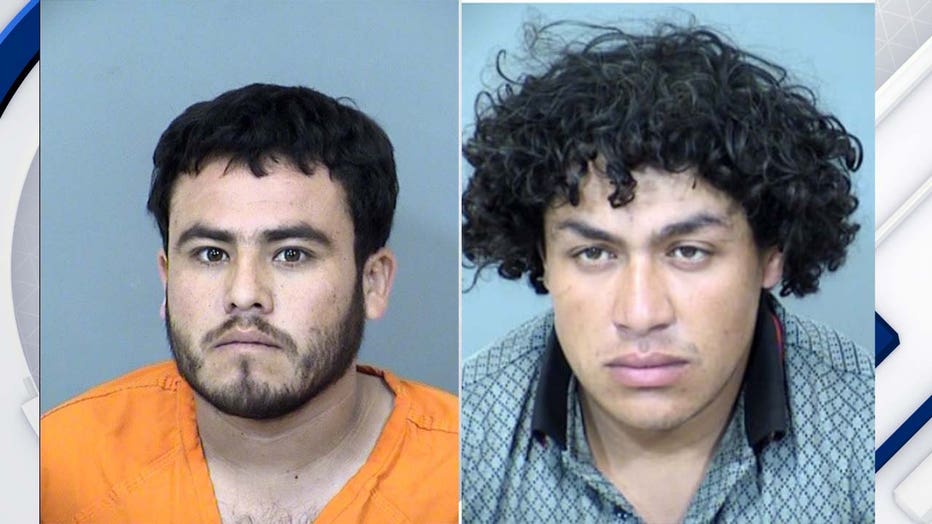 Luevano, 37, was last seen on Jan. 16 with her boyfriend. Her body was found in on Jan. 20, days after she was reported missing. Now, her boyfriend is considered by police to be the main suspect in the case. FOX 10's Justin Lum reports.

Irene's sister, Sandra Mercado, held onto hope all week as she searched for Irene in the West Valley.

"My sister called me, and she told me to hurry up and go back home, so we headed back over here. Unfortunately, they found my sister’s body," said Mercado. "She was just thrown out there like nothing. Why would someone do that to a good person? That's what I wanna know."

"I wish she was here, my sister," said Irene's sister, Yesenia Luevano. "[Lara]'s gonna pay for it. He's gonna pay good for that. He's gonna be inside jail and suffer inside there for what he did to my sister."

Luevano's mother, Arelene Luevano, said she is heartbroken by the ending, and thanked the community for their support. She also hopes her daughter is at peace.

"I'm gonna remember her the way she was, with that beautiful smile she had," said Arlene. "That's the way I wanna see her. I wanna see her like that, so mothers that are out there with your daughters, take care of them."

Car wash held in honor of the mother

Community members in Phoenix stepped up to hold a car wash for the family of Luevano on Jan. 22. It began at 9 a.m. and it continued through the late afternoon.

The family says this has been such a great outpouring of community support after an unbearable week.

"We just want justice for her. She's not here with us no more," said her sister, Sandra Mercado. Her grieving family is left planning her funeral.

"We gotta be strong, but it still hurts 'cause she's not here with us," she said. "A worthless guy, because he took my sister's life away. Besides stabbing her in the neck, he stabbed her multiple times. My sister tried to defend herself, but she couldn't get away, she couldn't get away."

The car wash was held to help cover funeral expenses.

"I feel so emotional because I see a whole bunch of people here supporting us," Mercado said. "I just wish things would've been different." While she is of course still devastated by this loss, her sister says she also feels very grateful.

"Me, my sisters, mom, dad, nieces and nephews, we're all thankful for what they're doing for us," she said. "We're just blessed."

Irene Luevano told her family that her boyfriend stabbed her in the neck over the weekend, and their concern for the missing woman is growing. FOX 10's Justin Lum reports.

It all began with a night out for Irene, after a call with her sister, Victoria Luevano.

"She was gonna go out to this little bar with her boyfriend, and she said that her daughters were doing her makeup," said Victoria, on Jan. 17.

Just a couple of hours later, family members say Irene called her daughter to claim that Jorge stabbed her in the neck. That was the last time anyone heard from Irene.

In the days following Irene's disappearance, Jorge was arrested on forgery charges, and the car that Irene was last seen in, a 2007 gray Chevrolet Impala with license plate number D3A9VE, was found by a family friend at the parking lot of a Filiberto's near 107th Avenue and Lower Buckeye Road.

"The vehicle has been impounded," read a statement released by police.

While a tow truck loaded up the car, Irene's family rushed to the area.

"It is the car, but my sister’s not in the car. She's not in the car. It had blood inside they said," said Sandra, on Jan. 18. "We knew that he had stabbed her in the neck, and so now, we don't know what else to think no more because three days have passed already."

On Jan. 19, family, friends and volunteers searched for Irene in the desert area south of where the car was found.

"We're gonna be here all day until the night, and we're just gonna look until we find her, so that she can know we're looking for her and we found her. We're taking her back with us," said Sandra.

Phoenix Police officers were not involved in the search, but detectives were seen in the area.

"I would never have thought I would have to come out here and look for my sister like this, but that’s what we’re thinking now, that he came out here and left her in the desert out here somewhere," said Sandra.

Teams searched the remote area on foot, in trucks, and in ATVs.

According to Phoenix Police officials, Lara was found at a local hospital with what stab wounds, which at the time had been reported as "self-inflicted." He has since been booked into jail on two counts of forgery.

Investigators say Lara admitted to buying a forged Arizona ID and Social Security card a year ago to gain employment.

"He seemed very nice, and we would never think nothing bad," said Sandra.

According to court documents, Lara's cell phone info showed he was headed to Mexico before turning around, and returning to Phoenix. Court documents also say Lara admitted to working for the Sinaloa drug cartel in Mexico, selling illegal pills.