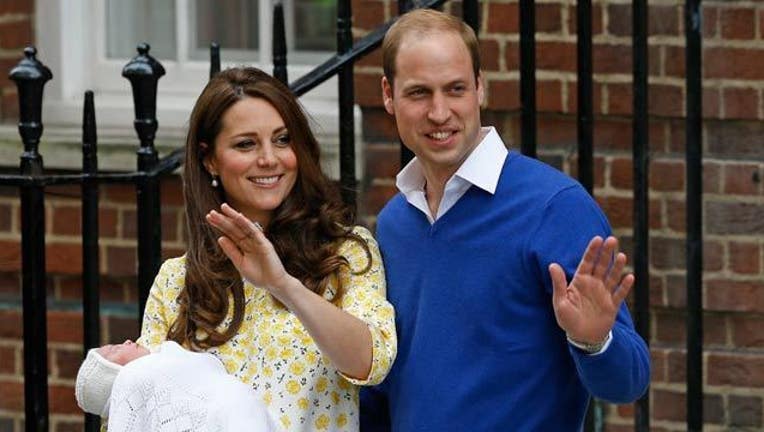 LONDON (AP) — From Prince Charles to royal fans to most of those who put down a bet, millions in Britain were hoping for a girl.

The Duchess of Cambridge delighted her nation and royal enthusiasts around the world Saturday by delivering one such princess. The royal birth was greeted with cheers and elated cries of "Hip, hip, hooray!" outside St. Mary's Hospital in London, where fans and the world's media have waited for days.

The baby — Prince William and Kate's second child — was born Saturday morning and weighed 8 pounds 3 ounces (3.7 kilograms), officials said. She is fourth in line to the throne and the fifth great-grandchild of 89-year-old Queen Elizabeth II. Britain hasn't welcomed a princess born this high up the line of succession for decades.

It may be a day or two before the world knows what to call her. When Prince George, her older brother, was born in 2013, royal officials waited two days before announcing his name.

Speculation about the new royal's name has been frenetic, and all the top bets for the baby's name have been for girls: Alice and Charlotte are the clear favorites, followed by Elizabeth, Victoria and Diana — all names with strong royal connections. Royal children are usually given several names — the baby's brother was christened George Alexander Louis — so the princess's name could incorporate more than one of those guesses.

Anticipation had been building for weeks after Kate, 33, told a well-wisher she was due around late April. Still, journalists were caught slightly off guard when she delivered barely three hours after checking into the hospital at dawn Saturday. William, 32, was present at the birth.

The couple later emerged on the hospital steps with the infant to briefly pose for photographers before leaving for their home at nearby Kensington Palace. Kate, who wore a yellow-and-white floral shift dress by British designer Jenny Packham, held the sleeping baby wrapped in a white shawl.

The couple looked relaxed but didn't answer any questions. William earlier told reporters he was "very happy" as he brought young George to the hospital to meet his baby sister. George, looking slightly alarmed by all the cameras, waved dutifully at the adoring crowds.

The queen and senior royals were "delighted with the news," officials said. The queen marked the occasion by wearing a pink ensemble while carrying out an official engagement in North Yorkshire, 250 miles (400 kilometers) north of London.

Cheers and chants of "Princess! Princess!" rang out from the hundreds of well-wishers and tourists gathered outside the palace and the hospital as soon as the news was announced. One fan who had camped out outside the hospital for days danced with joy.

"I'm top of the world," said royal camper Terry Hutt, 80, decked out in patriotic Union Jack gear. He did not expect the birth to happen as soon as it did but said: "Babies come when they're ready."

"If Diana was here, she'd be very, very proud," he added, referring to the late Princess Diana, William's mother.

The news was announced on social media sites like Twitter as well as by a traditional bulletin on a gilded easel in front of Buckingham Palace — a practice that dates to 1837.

A town crier in an elaborate costume — with no official connection to the royal family — shouted out the news at the hospital's door, clanging his bell to welcome the new royal.

"May our princess be long-lived, happy and glorious," said Tony Appleton, reading from a scroll in a booming voice.

Britain's political leaders — facing a hard-fought general election in just five days — rushed to congratulate the couple on the baby. Goodwill also poured in from the rest of the world: President Barack Obama said he wished the family "much joy and happiness," while Canadian Prime Minister Steven Harper said the British royal family held a "very special place in our country."

At 21 months, George is third in line to the throne, after his grandfather Prince Charles and his dad William. The newborn princess becomes the fourth in line, bumping Uncle Harry to fifth.

The last princess born so close to the throne was Princess Anne, the queen's second child, in 1950. Princesses Beatrice and Eugenie, the daughters of Prince Andrew and Sarah Ferguson, were fifth and sixth in line at the time of their birth.

Thanks to a recent change in the law, the new princess will hold her place in the line of succession that for centuries had put boys ahead of their sisters. That means no younger brother will be able to overtake the new princess in the order of preference to inherit the throne.

Nonetheless, the princess probably doesn't have to worry about one day becoming queen, since royal succession rules dictate that the throne always passes to the eldest child. Younger siblings only step up to the job in rare circumstances — in case of an illness, death, or an abdication.

The birth of their second child marks a new phase for William and Kate, who were wed in a lavish ceremony at Westminster Abbey in April 2011.

The royal couple is expected to spend more time in their country digs, a 10-room brick-faced mansion known as Anmer Hall on the queen's estate in Sandringham, 120 miles (190 kilometers) north of London. Their apartment at Kensington Palace in central London, where much of their staff is based, will still remain their official home, officials said.

Anmer Hall is also better located for William's new role as a pilot for Bond Air Services, a helicopter operator that works with the East Anglian Air Ambulance service. He will work with doctors responding to emergencies ranging from road accidents to heart attacks.