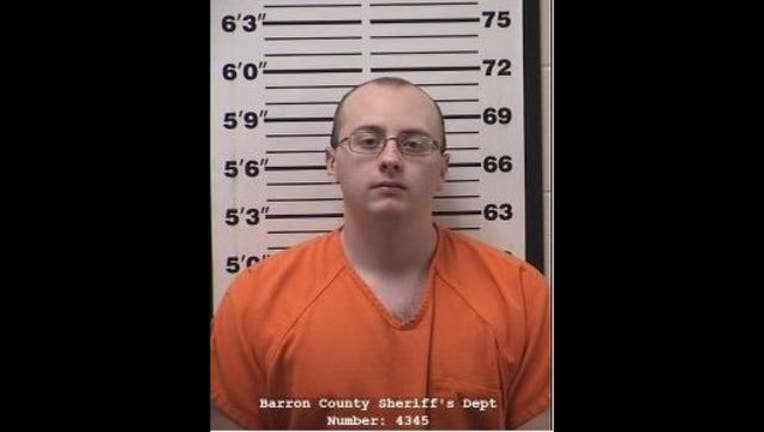 Jake Patterson, 21, was of Gordon, Wisconsin was arrested Thursday and is being held for the alleged abduction of 13-year-old Jayme Closs and the murders of her parents, Denise and James, in their Barron home. (Photo credit: Barron County Jail)

BARRON, Wis. (AP) - A Wisconsin man suspected of abducting a 13-year-old girl made up his mind to take the teen when he spotted her getting on a school bus, and he made two aborted trips to her family's home before finally carrying out an attack in which he killed Jayme Closs' mother in front of her, according to a criminal complaint filed Monday.

Jake Thomas Patterson, 21, told investigators he was driving to his job at a cheese factory one day when he stopped behind a school bus and watched Jayme get on. At that moment, he said, "he knew that was the girl he was going to take," the complaint said. Police have said the two did not know each other.

Prosecutors charged Patterson on Monday with kidnapping Jayme and killing her parents Oct. 15 near Barron, about 90 miles northeast of Minneapolis. He was also charged with a count of armed robbery and was scheduled to make his first court appearance later in the day.

Investigators believe Patterson hid Jayme in a remote cabin before she escaped on Thursday.

The criminal complaint said Patterson had gone to the home twice intending to kidnap Jayme, but broke off one attempt because too many cars were in the driveway and called off another because the house was too active.

On the night she was abducted, Jayme told police, she was asleep in her room when the family dog started barking. She woke her parents as a car came up the driveway.

She and her mother, Denise, hid in the bathroom, clutching each other in the bathtub with the shower curtain pulled shut. Her father, James, went to the front door. They heard a gunshot, and Jayme knew that James had just been killed, according to the complaint.

Denise Closs started to call 911. Patterson broke down the bathroom door. Jayme said he was dressed in black, wearing a face mask and gloves and carrying a shotgun.

He dragged Jayme outside, nearly slipping in blood pooled on the floor. He threw her in the trunk and drove off, pausing to yield to three squad cars speeding toward the house with flashing lights.

Patterson took her to a cabin that he said was his, ordered her into a bedroom and told her to take off her clothes and get dressed in his sister's pajamas. He then threw her clothes into a fireplace in the cabin's basement.

Whenever he had friends over, he made clear that no one could know she was there or "bad things could happen to her," so she had to hide under the bed. He sealed her under the bed with tote boxes and weights so she could not crawl out, according to the complaint. She had to stay under the bed whenever he left the house, sometimes going for hours without food, water or bathroom breaks.

Patterson told investigators that he kept Jayme under the bed when his father often visited him on Saturdays, turning up the radio in his room to cover any noise she might make.

He said he assumed he had gotten away with the slayings and kidnappings after the first two weeks went by. He told detectives that on the night he kidnapped her he put stolen license plates on his car, disabled the dome light and removed an anti-kidnapping release cord from his trunk. He also shaved his head so he would not leave any hair behind and chose his father's Mossberg shotgun because he thought it was a common model that would be hard to trace.

Patterson, who has no criminal history in Wisconsin, was described by people who knew him as a quiet and good student who participated in quiz bowl in high school. He wrote in his high school yearbook of wanting to join the Marines. On Monday, a spokeswoman for the Marines said Patterson lasted just a little more than month before washing out in October 2015.

The spokeswoman, Yvonne Carlock, said by email that Patterson's early discharge indicated "the character of his service was incongruent with Marine Corps' expectations and standards."

The criminal complaint says Patterson told detectives he worked at the Saputo Cheese Factory near Almena for just two days before quitting. The company did not immediately respond to messages from The Associated Press.

Patterson's defense attorneys, Charles Glynn and Richard Jones, said they believe Patterson can get a fair trial, but they are not sure where.

Then on Thursday, a woman walking her dog spotted Jayme along a road near Gordon, a town about an hour's drive north of Barron. The woman said the girl begged her for help, saying Patterson had been hiding her in a nearby cabin and that she had escaped when he left her alone.

The New York Post published photos of the cabin Monday. The images showed a shabby living area with a couch, refrigerator, an old television set and an unfinished ceiling. Exterior photographs show a lean-to loaded with firewood, a three-car garage and an empty box of adult female diapers in a trash can. A sign over the cabin's front door reads "Patterson's Retreat."

Authorities have not said whether Jayme was sexually assaulted. The complaint does not charge Patterson with any form of sexual assault. The narrative in the document does not say what Patterson did with her.

Barron County Sheriff Chris Fitzgerald said he met Jayme for the first time Sunday, and that she had an "awesome" smile on her face. He said she showed him her room at her aunt's home in Barron.

"It was a moment I'll never forget," he said.

For the latest updates on the story: https://bit.ly/2D9VEkM

For more stories on Jayme's abduction and her parents' deaths: https://apnews.com/JaymeCloss