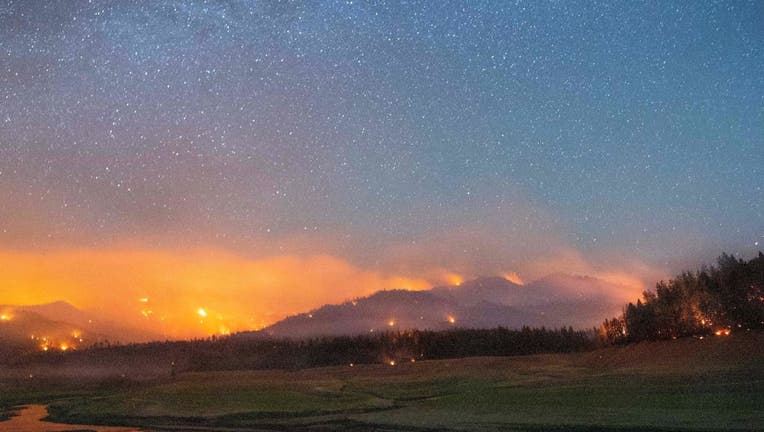 In this long exposure photograph, flames surround a drought-stricken Shasta Lake during the "Salt fire" in Lakehead, California early on July 2, 2021, as firefighters battle nearly a dozen wildfires in the region following a heatwave and multiple lig

Fire officials said parched brush and timber made perfect fuel for the kinds of disasters that have destroyed thousands of square miles of land in recent years, mainly in rural and forest areas.

Three large fires were burning near Mount Shasta, a towering volcano about an hour from the Oregon state line.

The greatest threat came from the Salt Fire, which broke out Wednesday near a freeway and destroyed 41 buildings, including 27 homes, in a rural area north of Redding. As of Saturday morning, it had grown to nearly 12 square miles and was only 5% contained.

All lanes of Interstate 5 are open, but remain under threat, Shasta-Trinity National Forest officials said in an email Saturday.

Highs in the area on Saturday and Sunday were expected to hit the mid-to-upper 90s despite a slight chance of morning thunderstorms. Those storms could cause erratic winds that may complicate firefighting. National Weather Service forecasters also warned that some areas could see late afternoon gusts that could fan flames.

Darlene Sherill's cabin went up in flames Wednesday afternoon. She and her husband, who live in Danville, moved in last November and had filled it with his home-built furniture.

"It feels very much like a violation to have a fire come to your home and destroy it, probably within minutes," Sherrill said from a Redding hotel on Friday.

Authorities suspect that it started from a hot piece of metal that flew off a car or truck on Interstate 5 but they haven't found the vehicle.

The largest blaze, the Lava Fire burning partly on the flanks of Mount Shasta, was 26% contained after burning more than 38 square miles. The blaze, caused by a lightning strike, forced several thousand people from their homes but most were allowed to return late Thursday.

To the northeast, the Tennant Fire in the Klamath National Forest had burned five buildings, including two homes, and threatened several hundred more. It grew slightly overnight to more than 15 square miles but progress was also reported there and it was 17% surrounded.

Mop-up began on the western flank while the east side remained active. Evacuation orders and warnings continued in nearby areas.

The trio were the largest of more than a dozen wildfires that erupted this week in the midst of hot, dry conditions usually seen in August, fire officials said.

National parks put out renewed calls for people to heed restrictions on campfires and other fire risks.

Klamath National Forest, a huge, sprawling area not far from the Oregon state line, said below-average winter rainfall and recent record-high temperatures "mean that one single spark can start a wildfire." Visitors were warned not to drive or park on dry grass or brush because hot exhaust pipes and mufflers could torch them.

Dragging trailer chains, scraping brakes and low tires that allow the rims to hit the road also can throw off dangerous sparks, the park said.

Last year, California wildfires scorched more than 6,562 square miles of land, the most in its recorded history. And just three years ago, a fire in Butte County in Northern California killed 85 people and largely destroyed the town of Paradise.