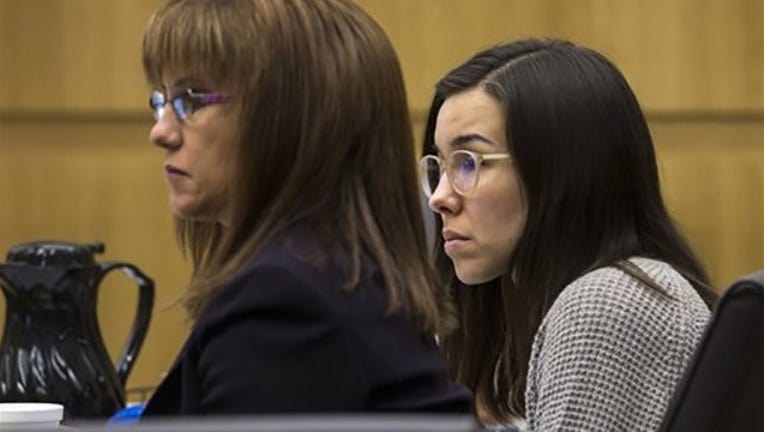 PHOENIX (AP) — The case of convicted murderer Jodi Arias went to a jury Wednesday that will decide if she is sentenced to death or life in prison for killing her boyfriend.

The jury got the case after a defense lawyer made his final plea for mercy in the killing that grabbed global attention over the violent nature of the crime.

Jurors deliberated for about three hours and were scheduled to resume their work Thursday.

The 2013 trial of Arias was broadcast live and became a sensation with its tawdry revelations that Arias had shot and slit the throat of her on-again-off-again boyfriend Travis Alexander.

Arias, now 34, was convicted then of killing Alexander. That jury, however, deadlocked on her punishment, prompting a penalty retrial before a new jury of four men and eight women.

Lawyer Kirk Nurmi said Wednesday that Arias was the victim of a twisted relationship in which she was sexually humiliated by Alexander, who was killed after he and Arias had sex and took intimate photos.

"Why did we go from this sexual encounter to the killing?" Nurmi said. "Because of this tumultuous relationship. Because the emotional stress all this was bringing on."

Arias consistently looked at her attorney as he pleaded for her life. When a prosecutor made his closing arguments on Tuesday, she occasionally cast her eyes on the jury but mostly looked elsewhere.

If another jury deadlock occurs, the death penalty would automatically be removed as an option, leaving a judge to sentence Arias to life in prison or life in prison with the possibility of release after 25 years.

Closing arguments Tuesday featured dueling images from the defense and prosecution that portrayed the case in much different lights.

The defense showed happy photos of Arias from her childhood and time with Alexander. The prosecutor showed gruesome crime-scene photos of the victim's slit throat.

Prosecutor Juan Martinez called Arias dishonest, questioned her claim that she's remorseful for having killed Alexander, and tried to minimize the role her psychological problems played in the case.

"It doesn't provide an excuse," said Martinez, who later asked jurors to sentence Arias to death.

Prosecutors said Arias attacked Alexander in a jealous rage after he wanted to end their affair and planned a trip to Mexico with another woman.

Arias has acknowledged killing Alexander but said it was self-defense after he attacked her.

Nurmi portrayed Alexander as a man divided between his Mormon faith and sexual desires that led him to have relationships with several women.

The defense attorney said Alexander used Arias to quench his sexual urges, called her demeaning names and told her she was soulless.

Arias passed up a chance to address the jury, saying she wanted to make such comments but insisting the courtroom be cleared. The judge said an appeals court has forbidden Arias from making such comments behind closed doors.