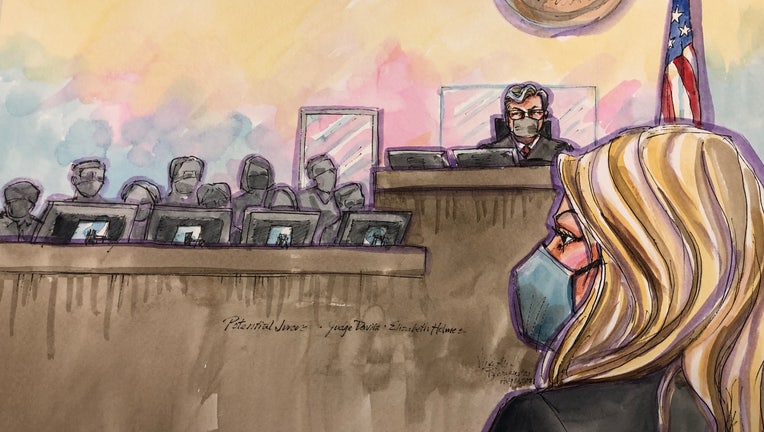 Courtroom artist Vicki Behringer drew this image of Elizabeth Holmes during the first day of jury selection in her trial in San Jose federal court on Aug. 31, 2021.

SAN JOSE, Calif. - A jury of seven men and five women was sworn in Thursday in the federal fraud case against former Theranos CEO Elizabeth Holmes.

The proceeding, which included selecting five alternates, paves the way for opening statements on Wednesday, in which the government and defense are expected to outline their cases for and against the 37-year-old disgraced biotech founder.

"An important part of this case is not only what she did, but did she do it with the intent to defraud or deceive," said Ellen Kreitzberg, a law professor at Santa Clara University.

She said the prosecution will likely lay out a methodical case that will be a challenge to refute.

A jury of seven men and five women was sworn in Thursday in the federal fraud case against former Theranos CEO Elizabeth Holmes.

"The government is going to be very fact based," Kreitzberg said. "They’re very successful in wire fraud prosecutions. Most of those settle and the ones that go to trial have a very high percentage of convictions."

The government is expected to call witnesses who have some knowledge of Holmes’ communications – possibly former investors, board members and employees who know about the company’s inner workings.

Holmes amassed hundreds of millions of dollars in investment capital while claiming her Edison machine could do complex tests from only a few drops of blood.

The company went so far as to begin testing patients’ blood – even though the technology never worked as promised.

The Department of Justice charged Holmes and her former partner "Sunny" Balwani with 10 counts of fraud and 2 counts of conspiracy.

They’ve both pleaded not guilty. Balwani’s case heads to trial early next year.

Perhaps the most compelling witness may be Holmes herself. Her defense team has indicated she may testify and blame Balwani – accusing him of controlling and abusing her

"She’s a chameleon," journalist John Carreyrou said outside court Thursday. "She can really project the front that she wants. She’s a great actress. Do I expect her to sell this to the jury and sell it well – absolutely."

Carreyrou broke the Theranos story for the Wall Street Journal back in 2015 and wrote the book on the case called Bad Blood.

He’s now covering the trial and hosting a podcast that’s following the case. The latest episode exposes text messages between Holmes and Balwani.

"The texts seemed to show a partnership of equals," he said. "It showed that Sunny at times expressed feelings of remorse or words of caution whereas Elizabeth didn’t. She was full steam ahead."

Both defendants have pleaded not guilty.