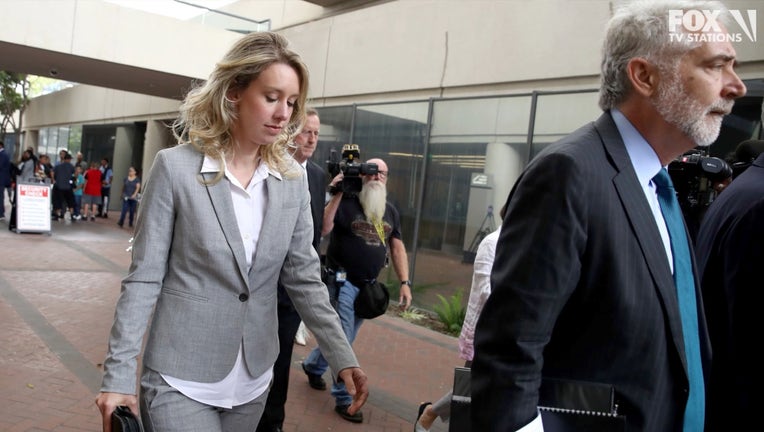 SAN JOSE - When one-time celebrated Silicon Valley CEO Elizabeth Holmes enters federal court Tuesday in San Jose, she will face some of the people who may decide whether she spends years behind bars or is set free.

Jury selection in the well documented fraud case against the 37-year-old begins this week – the beginning of the end of a sensational legal saga that has been the subject of books, an HBO documentary and even future feature films.

It’s a case that’s stands out as a referendum on Silicon Valley’s startup culture, a "fake it till you make it" ethos coupled with an environment bolstering some of the world’s biggest egos.

Theranos CEO Elizabeth Holmes heads to trial: What to expect

When one-time celebrated Silicon Valley CEO Elizabeth Holmes enters federal court Tuesday in San Jose, she will face some of the people who may decide whether she spends years behind bars or is set free.

In Holmes’ case, it began when she dropped out of Stanford in 2003 at age 19 to found Theranos, a biotech startup that promised to revolutionize the blood testing industry. With its Edison Machine, Theranos claimed it could conduct complex blood tests with only a simple prick of a finger.

The claim, along with Holmes’ carefully manicured image that stole directly from ex-Apple CEO Steve Jobs, propelled her to dizzying heights.

The company hit a whopping $9 billion valuation, with investors dumping in hundreds of millions while a black turtleneck clad Holmes relentlessly hustled her new technology.

The company partnered with Walgreens. She was named as Forbes’ youngest self-made billionaire. Two former Secretaries of State, Henry Kissinger and George Schultz, served on her board of directors. She was featured on magazine covers and the subject of glowing profiles.

But it was all a sham.

The Wall Street Journal exposed the company’s bogus technology in 2015 and from there things continued to unravel. Holmes in 2018 settled a civil case with the SEC for $500,000 and was banned from becoming the head of a public company for a decade.

The company dissolved and Holmes and her boyfriend, Theranos’ COO Ramesh "Sunny" Balwani, were charged by the Department of Justice with two counts of conspiracy and ten counts of wire fraud. Each charge carries a possible 20 years in prison.

The case was on hiatus for three years during the pandemic and while Holmes gave birth to a child. Here’s what to look out for in the days and weeks to come.

What happens this week?

Jury selection, also known as voir dire, begins. Attorneys for the prosecution and defense will question prospective jurors to seek a fair and impartial panel for trial.

The case is complicated because of its high-profile nature and it will likely be challenging to find 12 people unfamiliar with the case. KTVU legal analyst Michael Cardoza said that won’t necessarily preclude people from serving on the jury.

"A judge will not kick a juror off just because they know about the case," he said. "What they will get excused for is knowing about the case and having an opinion of guilt or not guilt in a case."

Opening statements are tentatively scheduled to begin in early September.

What is Holmes’ defense strategy?

Up until recently, it was unclear how Holmes would proceed. But a federal judge over the weekend unsealed previously filed court motions that offer a window into a possible legal strategy.

In seeking to separate Holmes from Balwani into two separate trails – Holmes’ attorneys argued in January 2020 the couple had an "abusive intimate-partner relationship."

Court documents add that "This pattern of abuse and coercive control continued over the approximately decade-long duration of Ms. Holmes and Mr. Balwani’s relationship, including during the period of the charged conspiracies."

A judge ultimately allowed the defendants to be separated. Balwani’s trial begins in January.

The decision will allow for Holmes to pursue what legal experts describe as an "empty chair" defense – a tactic where a defendant can shift fault to an absent party, in this case Balwani.

Holmes has not said whether she will testify in the case. But newly unsealed records indicated that she may take the witness stand.

"Ms. Holmes is likely to testify herself to the reasons why she believed, relied on, and deferred to Mr. Balwani," Holmes’ attorneys wrote in a February 2020 court filing.

Cardoza, KTVU’s legal analyst, said taking the stand in your own defense is a massive gamble.

"From all reports she has an ego larger than Texas and she thinks she can talk anybody into anything," he said.

But even with a jury that would usually favor a defendant, Holmes’ case could be challenging.

"Even though you may get pro defense jurors they will see through this and say "Wait a minute. You gave false blood readings to people and put their health at risk? That could have been me,’" Cardoza said.