ORLANDO, Fla. - A trip to Walt Disney World for a young girl celebrating her birthday became even more memorable when video of her impromptu dance moves with the park’s band went viral online.

Sydney Russell, 8, recently celebrated her birthday at the resort and received a surprise makeover at Bibbidi Bobbidi Boutique at Disney Springs, where she was transformed into Princess Tiana, the company said.

Afterward, the mini princess and her family went to the Magic Kingdom, where she started busting a move to music from the park’s Main Street Philharmonic Band. The band was playing "When We're Human," a song from Tiana's movie, "The Princess and the Frog." 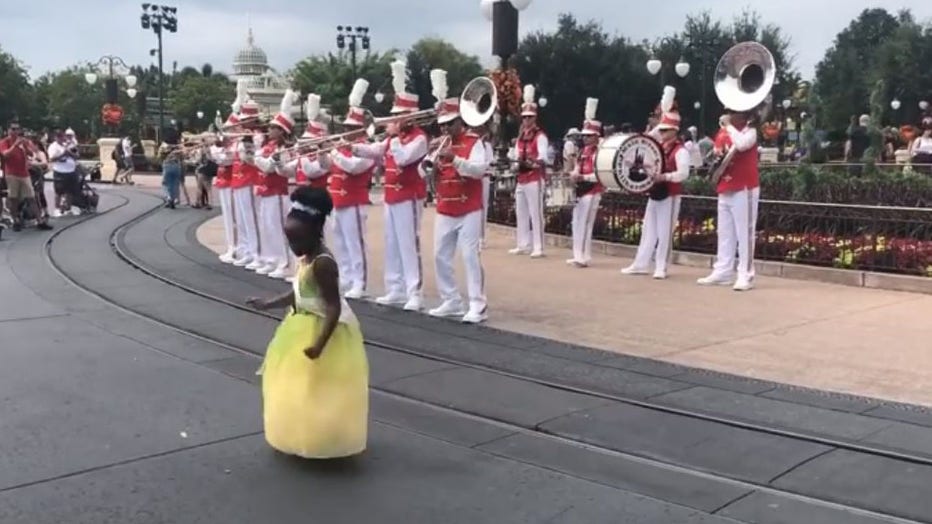 Sydney Russell, 8, busted a move with a band at Walt Disney World when she visited the park to celebrate her birthday. (Photo credit: Tiffany McKinnon Russell)

Her mother, Tiffany McKinnon Russell, shared an adorable video of Sydney dancing freely at the park with the caption: “Her makeover experience was AMAZING...and then THIS happened! She’s the definition of the phrase #LiveYourNOWDream.”

Shortly into the video, a Disney cast member notices her magical moves and leads her to dance with the band.

“I made up that dance right off the top of my head,” Sydney told Disney Parks. “I was just in my world and I was just living my moment. And when the moment was over, I was just like – did that just happen?”

Since being posted Oct. 2 on Facebook, the video has received more than 2 million views. The girl’s mother said the family was amazed the video became so popular.

“We’re so glad Sydney could touch so many people and everyone can share in her joy.”