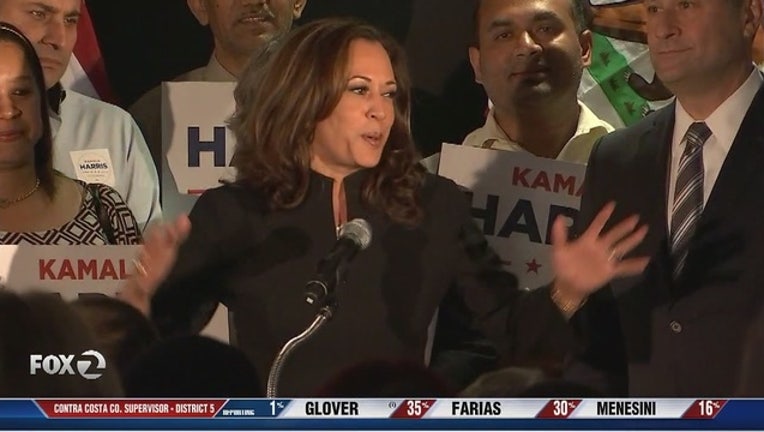 WASHINGTON (AP) - The Republican chairman of the Senate intelligence committee admonished California Sen. Kamala Harris, along with other Democrats, and asked her to be more respectful Wednesday as she pressed top intelligence chiefs testifying before the panel.

Harris was questioning Deputy Attorney General Rod Rosenstein, asking him if he would send a letter to Special Counsel Robert Mueller giving him complete independence in his probe into possible ties between President Donald Trump's campaign and Russia.

The exchange was tense, with Harris interrupting Rosenstein as he started to say there wasn't enough time to explain the answer. When she asked for a yes or no answer, he demurred, and she said, "either you are willing to do that or not."

Republican Sen. John McCain first interjected, out of turn, with a plea to the committee chairman, Sen. Richard Burr: "Mr. Chairman, they should be allowed to answer the question."

As the exchange between Harris and Rosenstein continued, Burr interjected and asked Harris to suspend.

"The chair is going to exercise the right to allow the witnesses to answer the question, and the committee is on notice to provide the witnesses the courtesy - which has not been extended all the way across - extend the courtesy for questions to get answered."

Rosenstein then went on to answer the question, saying he believes Mueller has adequate authority.

The exchange comes months after Republicans voted to cut off Massachusetts Sen. Elizabeth Warren while she was reading a letter by Martin Luther King Jr's widow, Coretta Scott King, critical of then-Senate colleague and attorney general nominee Jeff Sessions. Senate Majority Leader Mitch McConnell said Warren was given an explanation, but "nevertheless, she persisted" - words that Harris and others later called a "rallying cry" for women.

After the intelligence hearing, Oregon Sen. Ron Wyden, a senior Democrat on the panel, tweeted: "@SenKamalaHarris was getting facts onto the record. I was not interrupted by @senatorburr when I asked tough questions. She was."

Harris had a similarly testy exchange at a separate hearing with Homeland Security Secretary John Kelly on Tuesday, with Kelly repeatedly asking Harris if she would let him answer her questions.

Harris spokesman Tyrone Gayle said that as a prosecutor and former attorney general of California, Harris "has run countless investigations, and will follow the facts wherever they may lead to get the truth for the American people. That can only happen when witnesses answer questions."

The advocacy group Emily's List, which works to recruit and elect Democratic women who support abortion rights, quickly used the exchange to their advantage, sending out a statement: "We need more women - and far fewer Burrs - in Congress."