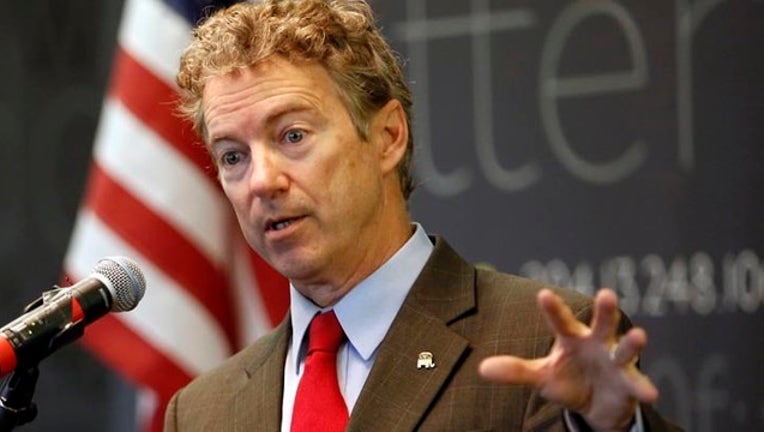 LOUISVILLE, Ky. (AP) — Sen. Rand Paul of Kentucky entered the campaign for the 2016 Republican presidential nomination Tuesday with a declaration that he's running for the White House to "return our country to the principles of liberty and limited government."

That message posted on his website prefaced a kickoff speech later in the day in Louisville.

"I am running for president," his web message said. In remarks to supporters, Paul could be counted on to be a fierce critic of Washington, where he is in his first term as a senator but seldom in line with his party's leadership.

Paul's challenge now is to convince Republican primary voters and caucus-goers that his is a vision worthy of the GOP presidential nomination, a prize twice denied his father, former Rep. Ron Paul of Texas.

Hundreds of supporters were already crowding into a hotel ballroom to hear Rand Paul speak, and many said they had been backers of Ron Paul's presidential runs.

"Rand, I think, encompasses those same principles (as his father), but he also realizes the pragmatism that is necessary to bring those principles to fruition in American politics today," said Eric Thomas, a 49-year-old financial services worker from Knoxville, Tennessee, who was waiting for Paul to arrive at his launch event.

Paul begins the 2016 race as just the second fully declared candidate, behind Sen. Ted Cruz of Texas, but he could face as many as 20 rivals for the nomination before the lead-off Iowa caucuses in February.

Along the way, Paul is likely to challenge his fellow Republicans' views on both foreign and domestic policy, as well as the nuts and bolts of how campaigns are run. Tech savvy and youth-focused, Paul is expected to be an Internet juggernaut that his competitors will be forced to chase.

After his speech in Louisville, Paul was set to answer questions from voters on his Facebook page. Before his announcement speech, he was already selling on his website iPhone cases branded with his logo, signed copies of the Constitution and Rand Paul beer steins.

The online store was a quick way for Paul to collect contact information for voters who want the swag but had not yet considered a direct donation to the candidate.

It's unclear, though, how much support Paul can muster in the Republican mainstream.

Paul is a frequent contrarian against his party's orthodoxy, questioning the size of the U.S. military and proposing relaxation of some drug laws that imprison offenders at a high cost to taxpayers. He also challenges the GOP's support for surveillance programs, drone policies and sanctions on Iran and Cuba.

But as the presidential campaign came closer, Paul has shifted his approach somewhat on the complicated question about how much government the country actually needs.

"The issue on Sen. Paul and national security issues is where he comes down in the continuing conflict between his principles and his ambition," said John Bolton, a former ambassador to the United Nations and a potential Paul rival for the GOP nomination.

In Paul's proposal for the 2012 budget, he called for reducing military spending and for fewer troops at the Department of Defense. "The DOD should not be treated sacrosanct with regard to the treatment of taxpayer dollars," Paul wrote in a plan that would balance the federal budget in five years.

But last month Paul proposed a 16 percent increase in the Pentagon's budget.

"On any given day, it's hard to know where he will be," Bolton said. "I believe in redemption, and I hope he comes all the way over. But I just don't know what's at work in his mind."

In another sign of his uphill climb, an outside group not connected to any candidate planned to spend more than $1 million on ads criticizing Paul's positions on Iran sanctions. The ads were scheduled to start airing as Paul was declaring himself a candidate.

Perhaps reflecting the challenges he faces in convincing his critics he deserves the nomination, Paul is also leaving open the door to a second term in the Senate. With the backing of his state's senior senator, Majority Leader Mitch McConnell, Paul is likely to seek the White House and the Senate seat at the same time.

McConnell was not expected to attend Paul's political rally on Tuesday, instead opting for a meeting with the Jessamine County Chamber of Commerce near Lexington.

One of Paul's likely rivals, Sen. Marco Rubio of Florida, has said he would not double-dip on the ballot. He is expected to announce next week that he will skip a Senate re-election bid in 2016 in favor of putting everything into a presidential campaign.