SOUTH LAKE TAHOE, Calif. - South Lake Tahoe residents fed up with the trash-littered beaches and the constant stream of tourists flowing into Lake Tahoe despite the pandemic plan to protest this weekend to demand officials do more to handle the influx of visitors.

Josh Lease, a 20-year resident, tells the Tahoe Daily Tribune he wrote a Facebook post last week to vent about city officials not properly handling tourism and the traffic issues that come with it.

“Tahoe is being thrashed,” Lease said.

He said he wrote the post to see if others shared his frustrations and found out many people do. Now, protests are planned for Friday afternoon and Sunday morning at five locations — Truckee, Tahoe City, Meyers, Incline Village and Kings Beach.

Lease said that people are flocking up here because most parts of the other states are closed and Tahoe is accommodating them, making it difficult for locals.

“We can’t lock everyone out,” said city spokesman Chris Fiore communications manager. “We recognize people from out of town view Tahoe is a safe haven.”

Fiore said officials recognize trash is an issue and that different agencies are collaborating to find a solution.

The city has also implemented the ambassador program to hand out masks around town and partnered with local agencies for marketing campaigns, he said.

“During this crisis, the city has gone above and beyond to keep people safe, keep Tahoe safe and keep Tahoe open,” Fiore said.

Fiore said that if people see egregious violations they should call the police’s non-emergency line. 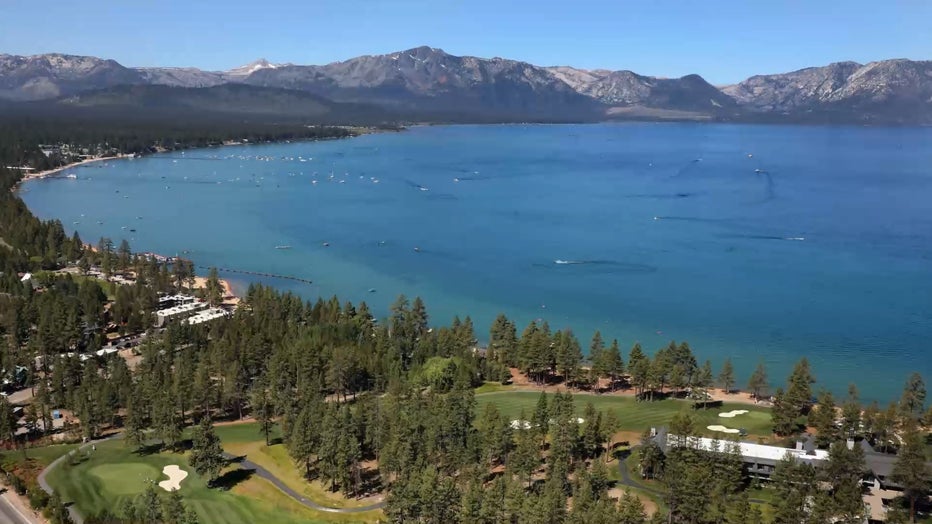 SOUTH LAKE TAHOE, NEVADA - JULY 12: Aerial view over the eighth and ninth holes at Edgewood Tahoe South course during the final round of the American Century Championship on July 12, 2020 in South Lake Tahoe, Nevada. (Photo by Christian Petersen/Gett

“Either open us all up or shut us all down completely,” he said.

In San Francisco, a city that depends largely on tourism, a nearly $11 billion loss in tourism spending is projected in 2020 and 2021, according to the city’s tourism bureau.

Tourism is the city’s biggest industry and supported 86,111 jobs before the coronavirus pandemic, according to the bureau, but conventions and leisure travel have been frozen following shelter-in-place orders in March, the San Francisco Chronicle reported.

Total San Francisco visitors are expected to drop to 12.9 million this year, down 52.1% from last year’s record-high 26.2 million visitors. In 2021, visitor volume is expected to improve to 18.4 million people, with domestic travelers returning faster than international visitors.

“Unfortunately, this year there’s nothing positive to say. It’s the biggest decline we’ve seen in the history of modern travel and tourism,” said Joe D’Alessandro, CEO of San Francisco Travel. “The outlook especially in the United States is not looking encouraging for the rest of 2020.”