LOS ANGELES - In a blowout victory, the Los Angeles Lakers won the 2020 NBA Finals Sunday night against the Miami Heat in a season honoring the late NBA legend Kobe Bryant.

Miami seemed to run out steam after forcing six games in the series, which was initially predicted to be a sweep. The Lakers led 64-36 at halftime, which is the largest halftime lead in NBA Finals history.

This marks the 17th championship for the franchise, and the Lakers are now tied with the Boston Celtics for the most championship titles in NBA history. Friday's victory also brings the Lakers their first championship in a decade and since the Kobe Bryant era.

This is James' fourth NBA championship title, having won two titles during his time in Miami and one in his hometown of Cleveland. This championship is his first with Los Angeles as he continues to build his legacy.

NBA veteran and LA's Rajon Rondo also made history Sunday, becoming the first player in NBA history to win a championship title for both the Boston Celtics and Los Angeles Lakers. The two teams have been rivals for decades. Rondo won in Boston during his sophomore season in 2008, along with NBA all-stars Kevin Garnett, Ray Allen and Paul Pierce.

The Lakers were expected to close it out Friday night and even wore their "Black Mamba" jerseys in honor of Kobe Bryant's legacy during their anticipated championship win in Game 5. Prior to Friday night's loss, the Lakers were undefeated when donning the black jerseys with gold trim.

"It’s something more than just a uniform. It represents an individual who gave this franchise 20 years of his blood, sweat and tears," James said.

However, the Lakers did not get it done Friday night as Jimmy Butler and the Miami Heat continued to prevail and exceed expectations with a 111-108 win.

The two teams battled it out in the fourth quarter in Game 5and James had an explosive 40-point performance. However, both James and Danny Green missed crucial shots with seconds left on the clock.

Wearing white "Association" jerseys on Sunday, the Lakers managed to carry Bryant's legacy with a championship.

And while Butler doesn't play for the Lakers, his postseason performance has displayed tremendous "Mamba Mentality."

According to ESPN, Butler played in 98.3% of the minutes in four games of the NBA finals, which is the highest percentage since Bryant in 2004.

The unprecedented season took a turn after the gutwrenching loss of Bryant, his 13-year-old daughter Gianna, and seven others in a tragic helicopter crash on Jan. 26.

Since then, the Lakers have fought to honor his legacy by bringing a championship title back to Los Angeles.

Nearly a month before their deaths, Bryant and his daughter, Gianna attended a Lakers game at Staples Center as the men in purple and gold took on the Dallas Mavericks in late December. The Lakers went on to win the game 109-95.

Gianna, known as "Gigi," by loved ones, was a rising basketball star and dreamed of carrying her father's basketball legacy by playing for the UConn Huskies and in the WNBA someday.

Also aboard the doomed helicopter were Gigi's teammates and fellow aspiring WNBA players Alyssa Altobelli and Payton Chester, along with their parents.

Bryant's final social media posts celebrated LeBron James after he surpassed him as third place on the NBA's all-time scoring list in a game against the Philadelphia 76ers in late January.

Kobe and Gianna were killed the next day.

"I literally just heard your voice Sunday morning before I left Philly to head back to LA. Didn’t think for one bit in a million years that would be the last conversation we’d have," James said in a heartfelt Instagram post. 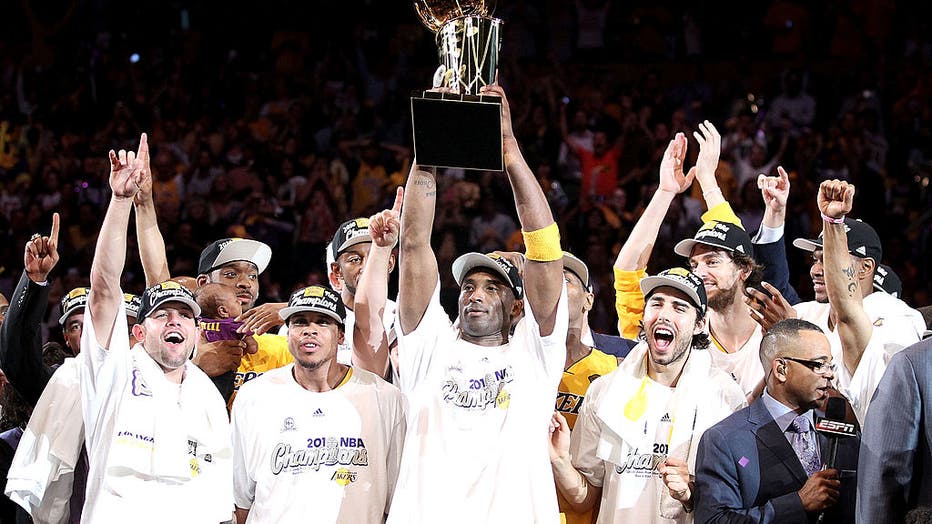 LOS ANGELES, CA - JUNE 17: Kobe Bryant #24 of the Los Angeles Lakers holds up the Larry O'Brien trophy after the Lakers defeated the Boston Celtics in Game Seven of the 2010 NBA Finals at Staples Center on June 17, 2010 in Los Angeles, California. (P

Those championships include back-to-back titles in 2009 and 2010 with an impressive roster that included Bryant, Pau Gasol, and Derek Fisher. They also include a three-peat with the dynamic duo of Bryant and Shaquille O'Neal, winning championships titles from 2000-2002. Kobe and Shaq are often considered the greatest NBA duo of all-time. 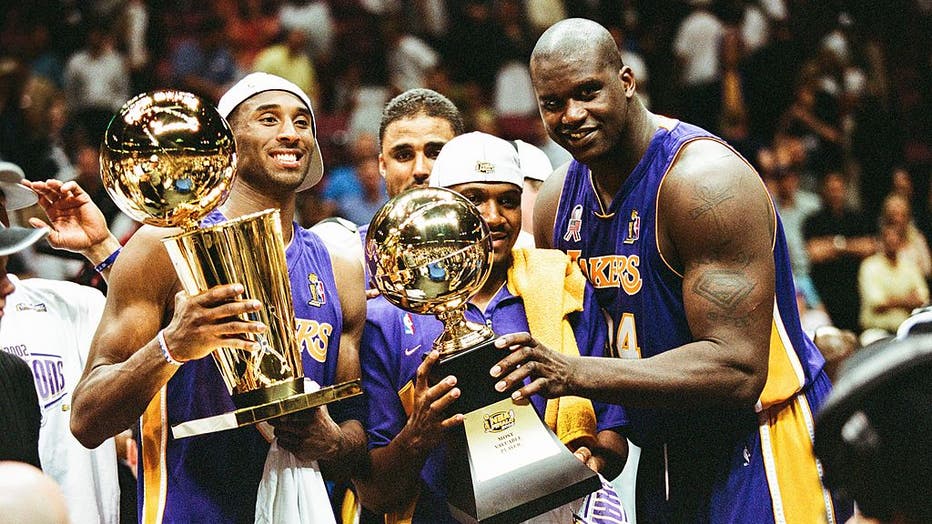 Amid the virus era, a social justice movement sparked following the death of George Floyd at the hands of police officers in Minneapolis.

LeBron James has been one of the most outspoken athletes in wake of the social justice movement. He has posted numerous social media posts to his millions of followers speaking out against racial injustice.

James is also one of the well-known professional athletes who formed a group that encourages African Americans to vote in hopes to tackle voter suppression.

The NBA resumed its season on July 30 at the Disney World complex near Orlando, Fla. The complex is often referred to as the “NBA bubble," where players and coaches adhered to coronavirus safety guidelines. NBA players, coaches, and staff also had to sacrifice being separated from their families.

As an act of solidarity during the social justice movement, the NBA said players would be able to wear social justice messages on their jerseys and could kneel during the National Anthem without facing penalties once the season resumed.

The NBA also announced there would be a "Black Lives Matter" decal on the court for the rest of the season.

The NBA season took another temporary pause during the playoffs after players refused to take the court following the Jacob Blake shooting.

The NBA playoffs resumed days later after the players voted to continue the season.

In their journey to the NBA Finals, the Lakers earned the number one seed. During the playoffs, the Lakers beat Portland in the first round, Houston in the second round, and Denver in the Western Conference Finals.

The "Battle of the Los Angeles" in the Western Conference Finals was set to be arguably the season's most anticipated series after the Los Angeles Clippers acquired two-time NBA Finals MVP, Kawhi Leonard, along with NBA All-Star, Paul George.

The Clippers were loaded with talent and beat the Lakers in their first two matchups of the regular season, including on Christmas Day.

However, the Clippers had a disappointing season finale and failed to beat Denver in the semifinals after initially being up 3-1 in the series.

The Lakers were expected to sweep after Miami lost veterans Goran Dragic and Bam Adebayo due to injuries in Game 1.

Not only does this mark the Lakers' first NBA title in a decade, but snaps the seven-year drought in the playoffs as the franchise has struggled to put the puzzle pieces together to find a championship-contending team.

The Lakers acquired NBA superstar LeBron James in 2018 and later acquired all-star Anthony Davis from New Orleans before the 2019-2020 season.

However, it is expected to be an exciting season as the Clippers look to avenge their underwhelming finale. Other big factors for the upcoming season include Golden State's Steph Curry and Klay Thompson returning from their injuries, as well as Kevin Durant's Brooklyn debut with the team's new head coach, Steve Nash.