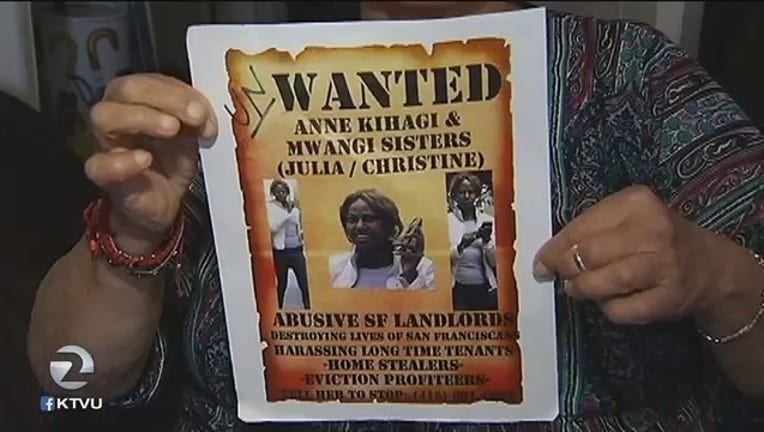 SAN FRANCISCO (BCN) A landlord accused of harassing and illegally evicting tenants in rent-controlled buildings plans to appeal a ruling that blocks her from evicting tenants and orders her to pay millions in fines, defense attorneys said today.

A tentative ruling issued Tuesday by Superior Court Judge Angela Bradstreet found that Anne Kihagi and two associates had engaged in a campaign of harassment, retaliation and fraudulent evictions of tenants at
seven rent-controlled buildings in San Francisco.

The ruling included a five-year injunction that orders Kihagi to pay more than $2.4 million in penalties, prohibits further contact with tenants, requires her to hire an independent management firm, prohibits
further litigation or evictions without the approval of the management firm and halts all evictions in progress as of Jan. 12, 2017.

City Attorney Dennis Herrera, who filed suit against Kihagi in June of 2015, called the ruling a "resounding victory for San Francisco tenants and the rule of law."

"I've gone after a lot of lawless landlords in my time, but Anne Kihagi has a special place reserved for her in San Francisco's abusive landlord hall of fame," Herrera said. "Her cruelty is stunning."

Attorney Karen Uchiyama, who represented Kihagi along with the firm of De La Pena & Holiday, LLP, said she planned to appeal the ruling, particularly the aspect affecting Ellis Act evictions now in progress at a
Guerrero Street property.

"A private property owner cannot be forced to stay in the rental business," Uchiyama said.

Uchiyama said a series of court rulings before the trial began barred the defendants from testifying in their own defense and prohibited many defense witnesses as well, tying the hands of defense attorneys.

"The City and tenant activists group's lawsuit and the resulting court decision underscores the City's agenda to scare landlords from evicting any tenants for cause, particularly those tenants who appear outwardly
sympathetic," Uchiyama said in a statement. "Defendants implemented lawful Owner Move-In evictions and in fact, moved into their own properties."

Kihagi began buying rent-controlled buildings in San Francisco in 2013, and then used a variety of tactics to push tenants out so that she could make unpermitted improvements to the units and rerent them at higher
rates to new tenants, according to Herrera.

She failed to cash rent checks and then claimed tenants had paid rent late, and backdated correspondence and notices. She also entered tenants' apartments without notice, refused to make timely repairs and even put surveillance cameras outside tenants' front doors, the court found.

In all, Bradstreet found that 23 tenants had been harassed and wrongfully evicted and 10 others had been illegally harassed, including one who died.

The $2.4 million in penalties includes around $1.1 million for building code violations documented by the city's Department of Building Inspection at Kihagi's properties. Kihagi was also ordered to pay the city's
investigative costs and attorneys' fees, which are expected to run into the millions.

The order also requires Kihagi to remove surveillance cameras pointing toward tenants' units and disclose all San Francisco properties in which she has an interest, along with tenant lists and rent rolls. All tenants must be notified of the injunction and the city has the right to make unannounced surprise inspections every quarter.