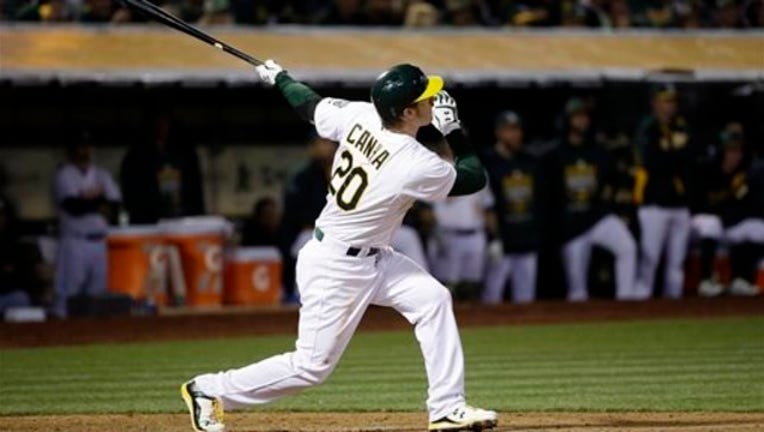 OAKLAND, Calif. (AP) — Scott Kazmir struck out 10 and was backed by a couple of rookies getting their first big league hits, and the Oakland Athletics beat the Texas Rangers 10-0 on Wednesday night.

Mark Canha hit a three-run double for his first major league hit in the third and added an RBI double in the sixth for four RBIs.

Fellow rookie Tyler Ladendorf hit an RBI triple for his first hit earlier in the third and had two RBIs. Kazmir (1-0) received all the support he needed and then some for the new-look A's.

The left-hander and 15-game winner last season had his 23rd game with 10 or more strikeouts. He allowed one hit over seven innings in a dazzling season debut.

The A's shut out Texas in another win after Sonny Gray carried a no-hit bid into the eighth inning of Monday night's 8-0 victory, a combined one-hitter with Evan Scribner. Oakland has outscored the Rangers 19-3 over the first three games heading into Thursday's finale.

Cody Ross added an RBI single and drove in two runs in his Oakland debut after arriving just before batting practice. He was released last weekend by Arizona and chose to join the A's over other clubs that expressed interest in signing the veteran outfielder, who earned NL championship series MVP honors while leading the San Francisco Giants to the 2010 World Series title across the bay.

Lefty Ross Detwiler (0-1) was done after 4 1-3 innings in his first start since July 3, 2013, with the Nationals in a season cut short by back problems. He was tagged for eight runs — seven earned — and nine hits with two strikeouts and two walks.

And he didn't get much help from a defense that committed two of its four errors in the fourth inning alone that led to the A's adding on.

Canha had a forgettable first opportunity as a big league first baseman. In the first, he thought he had scooped up leadoff man Leonys Martin's bunt and tried to reach and tag him but didn't have the ball.

His hit helped erase any sting from that play. His drive hit the top of the wall in right-center then bounced back onto the grass. The umpires went to review to determine if it had been a home run, but the call stood after 1 minute, 27 seconds.

Delino DeShields entered to play center field in the seventh for his major league debut. He was the last position player who hadn't been in a game as first-year manager Jeff Banister tries to get everybody some early playing time. DeShields singled in the eighth for his first career hit.

Texas reliever Logan Verrett joined all the others making major league debuts when he followed Detwiler.

Rangers: RHP Kyuji Fujikawa, on the disabled list with a strained right groin, will throw off a mound for the first time in his rehab Friday once the team returns home.

Athletics: RF Josh Reddick, scheduled to come off the DL on Saturday from a strained oblique, is schedule to make a rehab start for Class A Stockton on Thursday.

Rangers: RHP Nick Martinez starts the finale, the only member of the Rangers' season-opening rotation a year ago.

Athletics: RHP Kendall Graveman makes his Oakland debut after being acquired from Toronto in the trade that sent All-Star third baseman Josh Donaldson to the Blue Jays.