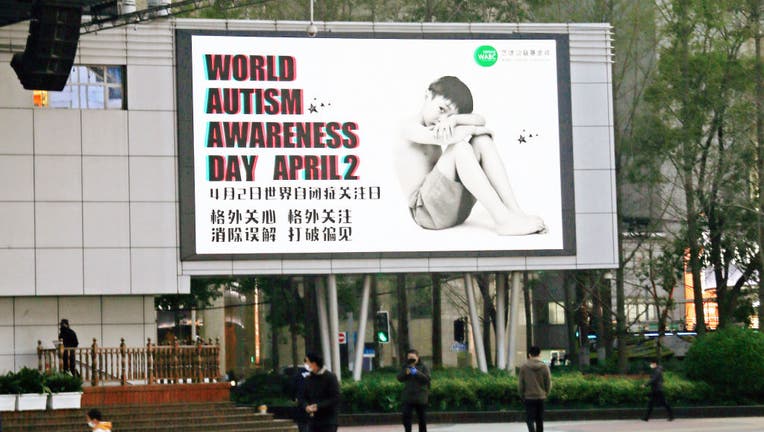 A public service advertisement for autistic children around the world is displayed on a large screen at Nanjing Road Pedestrian Street in Shanghai, China, on April 1, 2021. (Photo credit: Costfoto/Barcroft Media via Getty Images)

Thanks to a declaration passed by the United Nations General Assembly in 2007, April 2 will forevermore be known as World Autism Awareness Day.

Autism is a bio-neurological developmental disability that presents itself with a spectrum of symptoms with varying severity. It affects one out of every 59 children and is most often found in boys, according to the National Autism Association (NAA).

Many children with the condition are nonverbal, so communication with them can be difficult. And those on the spectrum who can speak often struggle to comprehend ordinary social cues that neurotypical people do every day.

A person with autism may not understand eye contact, facial expressions, gestures, tones of voice or sarcasm. It may be difficult for them to recognize their own emotions, as well as others. And they may engage in repetitive body movement, such as rocking, flapping, spinning or running back and forth.

The struggle with social skills often makes children with autism easy targets for bullies. The NAA provided the following data about bullying:

The hardships don’t end when they reach adulthood. People with autism sometimes face discriminatory hiring practices and obstacles in the workplace that can place their population among the most unemployed and under-employed, the UN said.

RELATED: ‘Take a chance on me’: 20-year-old with autism posts letter on LinkedIn to future employers

A 20-year-old Virginia man with autism posted a letter on LinkedIn asking potential future employers to take a chance on him. The letter went viral and landed him a summer scholarship.

There’s no cure for the condition, but there are resources that can help a person on the spectrum learn to decipher social cues. Early diagnosis and intervention can make a world of a difference in a person with autism’s life, according to Autism Speaks — one of autism’s biggest charities.

Autism Speaks holds its Light It Up Blue campaign every April 2 — asking everyone to wear blue to help raise awareness. But beyond attire, many iconic landmarks will turn their lights blue for the night as well.

Buildings like the Empire State Building in New York, the Chenghuang Pavilion in China and the Sydney Opera House have all gone blue in the name of autism awareness.

Anyone wishing to donate to autism-related charities can do so through Autism Speaks, the National Autism Association or any of the many nonprofits dedicated to the cause.