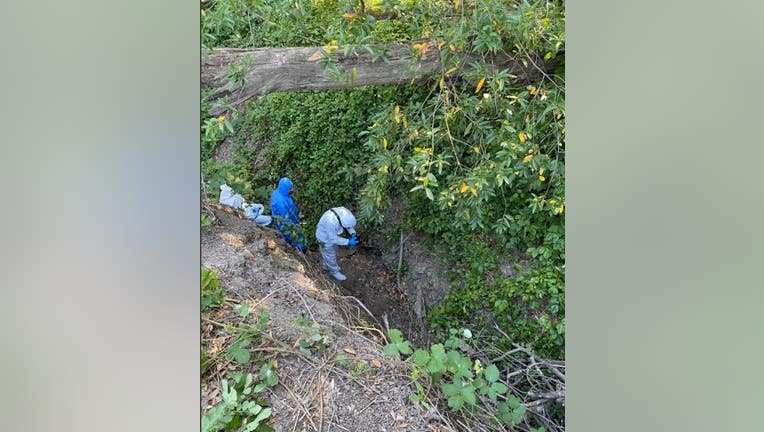 Investigation of a missing Windsor man in Sonoma County ends with an arrest on suspicion of murder.

Juan Martinez, 33, was taken into custody by detectives on Tuesday for the shooting death of a man who was missing for more than a week, officials said. The victim in this case, an unidentified Windsor man, was reported missing June 13 to Santa Rosa police.

Investigators said the victim was last seen on West Steele Lane in Santa Rosa, but because he lived in Windsor, Windsor police opened an investigation and considered his disappearance suspicious.

Investigators revealed the victim was last seen leaving Windsor with Martinez on June 10, with a large amount of cash to buy a car. That afternoon Martinez allegedly shot and killed the victim on Windsor River Road near Kensington Lane.

Officials said Martinez fled the area using back roads after burying his victim in a shallow grave on the 5000 block of Eastside Road in Forestville.

Detectives said Martinez discarded his gun nearby, cleaned his pickup truck and threw away his clothes. On June 18, he called the victim's wife to demand ransom and disguised his voice. He told her not to involve police, officials said.

Despite his instructions, the wife notified Windsor police. On June 20, detectives found Martinez’s pickup truck with blood inside it abandoned in the 5000 block of Westside Road in Healdsburg.

A day later, detectives received a tip on Martinez's whereabouts. He was found near Southwest Community Park in Santa Rosa. He was arrested without incident, officials said. Investigators said that later they found the victim’s money in Martinez’s home.

Martinez was arrested on suspicion of murder, robbery and extortion. He is being held in the Sonoma County Jail without bail. The Sonoma County Sheriff's Office said they will release the victim's name once he is positively identified.