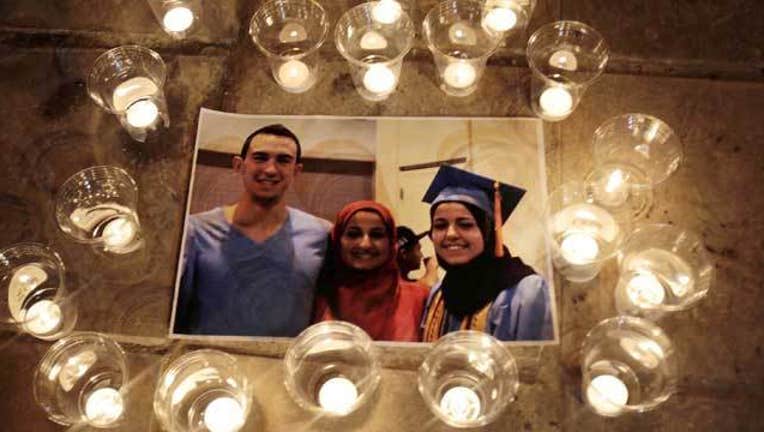 DURHAM, N.C. (AP) — A grand jury in North Carolina indicted a man Monday on three counts of murder in the shootings of three young Muslims in what authorities have said was a dispute over parking spaces.

No one answered a phone call from The Associated Press at the courthouse, which closed midday for an impending ice and snowstorm.

Deah Shaddy Barakat, 23; his wife, Yusor Mohammad Abu-Salha, 21; and her sister, Razan Mohammad Abu-Salha, 19, were all found dead in their Chapel Hillcondominium last week. Hicks was their neighbor, and others who lived nearby said he had frequent problems with where people parked in the complex near the University of North Carolina.

Police in Chapel Hill have said they have not uncovered any evidence Hicks acted out of hatred for his neighbor's faith, but their investigation continues. The FBI is also investigating.

Hicks, 46, is scheduled to be in court on the murder charges March 4.

Hicks described himself online as a "gun toting" atheist. Search warrants listed a dozen firearms taken from his home, including four handguns, two shotguns and six rifles — as well as a large amount of ammunition. He was carrying a pistol when he turned himself in several hours after the Feb. 10 shooting.

Family members of the victims have said they were executed with shots to the back of the head. Police have not discussed specifics on how they were killed.

Hicks remains in jail without bond. His court-appointed lawyer, Stephen Freedman, has said he could not comment on the case.