A 57-year-old man who was prosecuted in a separate arson case was charged Tuesday with setting a four-alarm fire that caused extensive damage to the historic San Gabriel Mission.

SAN GABRIEL, Calif. - A 57-year-old man who was prosecuted in a separate arson case was charged today with setting a four-alarm that caused extensive damage to the historic San Gabriel Mission last July 11.

John David Corey -- also known as "Joker" -- is charged with two felony counts of arson of an inhabited structure and one count each of arson during a state of emergency, first-degree residential burglary and possession of flammable material in connection with the early morning fire, according to the Los Angeles County District Attorney's Office.

Corey allegedly broke into the mission and started the blaze, which spread to the roof and along the length of the church, according to the District Attorney's Office. The fire, which was reported at 4:24 a.m., took more than two hours to knock down. 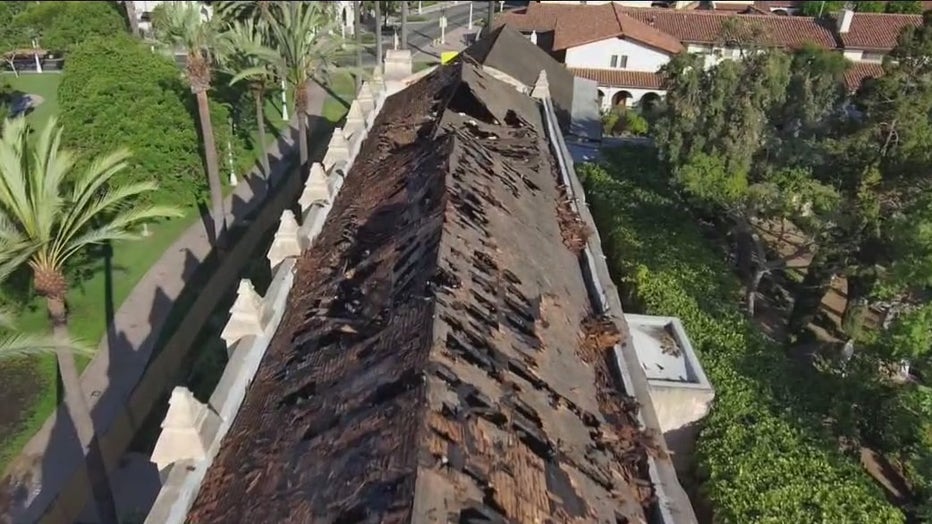 Portions of the roof fell on firefighters, who had to evacuate and initiate a defensive fire attack, according to Capt. Antonio Negrete of the San Gabriel Fire Department. Crews managed to stop the blaze before it reached the altar, museum and the adjacent rectory.

There were no civilian injuries, though one San Gabriel firefighter sustained non-life-threatening injuries.

Corey -- described as being from the San Gabriel Valley region -- was intially arrested and sentenced to three years for a separate case in San Gabriel that occurred after the fire at the mission, according to the San Gabriel Fire Department.

Nearly 50% of the on-duty fire resources of the West San Gabriel Valley were called to battle the mission fire as a result of automatic aid agreements within the region, with more than 85 firefighters, 12 engine companies, five truck companies, four rescue ambulances and five battalion chiefs on hand.

The ensuing investigation was led by the Verdugo Fire Investigation Task Force and included assistance from the San Gabriel Police Department, along with the San Gabriel, San Marino, Glendale, Monterey Park and Monrovia fire departments, the Los Angeles City Fire Department and its arson K9 team, the Bureau of Alcohol, Tobacco, Firearms and Explosive and the FBI.

"I'd like to thank our neighboring agencies for their support during the investigation," San Gabriel Fire Department Chief Steve Wallace said.

"Their assistance during a challenging year has been instrumental in our investigation of the Mission San Gabriel fire."

While arson investigations are routine with all fires at houses of worship, Negrete noted shortly after the blaze that the fire occurred at a time of criticism of the California missions and damage to several statues of Serra.

Church staff had removed a statue of Serra from public view a week earlier and put it in safe storage, Negrete said.

Archbishop Jose H. Gomez woke up before dawn to hear the news that the San Gabriel Mission, founded by Junipero Serra in 1771, was burning. He noted then that the roof had been destroyed and there was substantial damage to the old church.

"By God's grace and the efforts of more than 10 fire engine companies, the fire was stopped at the steps of the altar. We are so grateful for the outpouring of support from our Mission families both near and far," the Rev. John Molyneux wrote last summer on the mission's website.

A fund-raising campaign was subsequently launched to repair the damage, with work beginning first on the roof, which will hopefully be fully functional and ready by spring 2022, according to the mission's website.

An arraignment date has not been set yet for Corey, who could face up to 14 years in prison if convicted as charged.

"The loss to the mission was in the millions of dollars, but the loss to the community is immeasurable," District Attorney George Gascon said in a written statement.