An unexpected visitor broke into a family's home, and it was all captured on a home surveillance camera. Shawn Warley was upstairs on a conference call and said he did not know a bear had entered his home through a sliding glass door.

APOPKA, Fla. - A bear walked right into a Florida home and checked things out, while the family was upstairs.  The bear was more curious than hungry, but the homeowner is now going to do more to protect his home.

“It” being video that Warley’s in-home camera captured, showing the moments a bear casually strolled into his kitchen from the backyard through a sliding glass door, sniffing around and grunting. It was a complete shock for Warley.

“It’s a bear that I had no idea was here. I didn’t know a bear was savvy at home invasions,” said Warley, who lives in Apopka.

Warley was upstairs on a conference call at the time and didn’t even know anything or anyone got inside until three hours later.

“I came downstairs and that was open. That was on the ground. And I’m like what could have gotten in here.”

He checked his camera and this is what he saw: 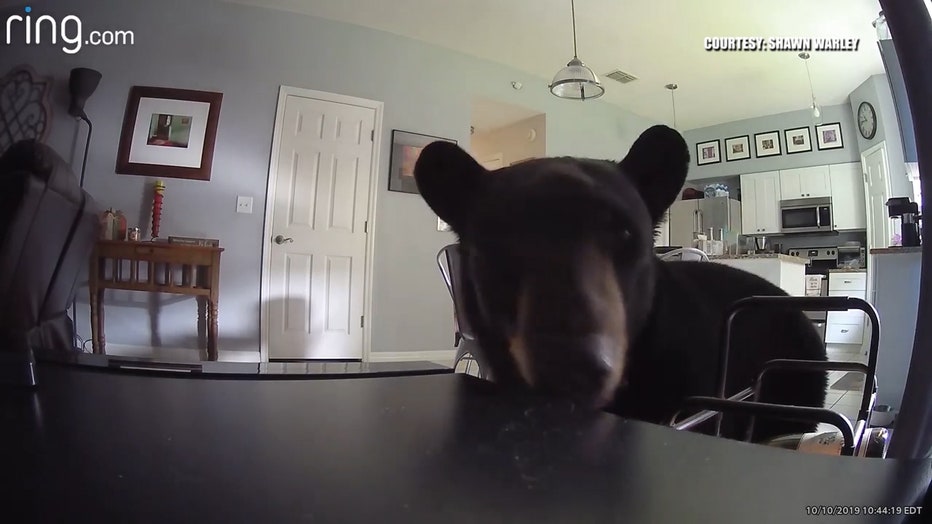 “I was shocked and the first thing I actually tried to find was my cat.”

The cat was just fine, but its food was another story.

“The first thing he did is he bee-lined right for the cat food bowl and he literally laid down and ate the cat food.”

The door was locked but this bear was not taking no for an answer, clawing at the door until he eventually got inside.

It was just a walk through the kitchen.

“He went this way and he came back through here,” and then he was gone.

“It was quite spectacular. I’ve already cleaned up all the bear prints because there were bear prints all around here.”Warley plans to install more locks on the back door just in case the bear comes back.