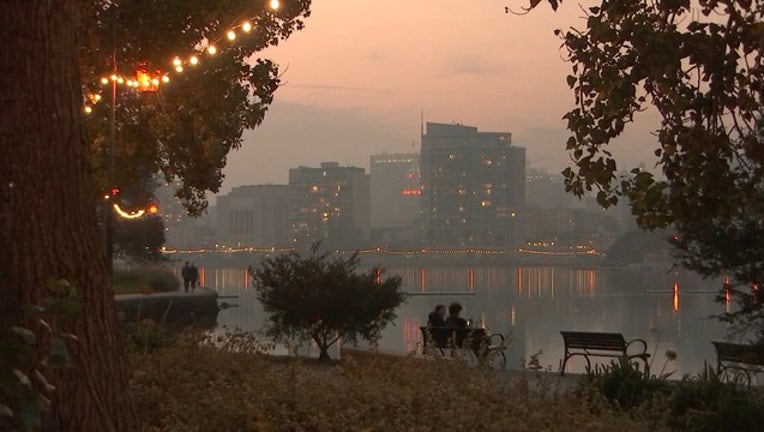 The air quality over Lake Merritt in Oakland was still unhealthy on Nov. 18, 2018.

OAKLAND, Calif. - With all the pollution in the air lingering in the Bay Area this week, the urban legends about the pending precipitation on Wednesday is causing a flurry of fake forecasts to circulate on social media about the rain.

The biggest question many are asking is: Will it be toxic?

While some social media posts indicate yes, the answer from several meteorologists and scientists is resoundingly no.

“There will be no toxic effects to the rain,” said Eric Stevenson, director of meteorology and measurement at the Bay Area Air Management Quality.

Stevenson said that the unhealthy air that has been blanketing much of Northern California from Butte County’s Camp Fire comes mostly from burning trees and not toxic chemicals, Stevenson said. %INLINE%

Wildfire smoke is more carboneacous, he said, which means it’s made mostly of carbon, which is easily incorporated back into the soil, he said.

By contrast, acid rain, which is toxic, is mostly comprised o of sulphur dioxide and nitrogen oxide from industrial emissions that combine with water in the atmosphere, Anderson said.

Because this rain will not contain toxins, Anderson was able to answer several questions from conerned pet owners.  Can animals drink water from the rain puddles? Yes, Stevenson said. Do you have to wash their paws before coming inside? No.

There is history behind Stevenson’s science. When Stevenson and his crew tested air quality in the fire zone last year when the North Bay fires were out, air monitoring results showed toxins were not at levels of concern, even with the ash kicked up and disturbed.

One caveat: Stevenson said there is always some particulate matter in the air, but the levels are barely noticeable and normally drops out of the sky at some point.

Moreover, Stevenson and other meteorologists say that the wind ahead of the rain, expected to fall early Wednesday and then again on Thursday, will push the dirty air away before it falls.

National Weather Service meteorologist Steve Anderson said that by the time the rain comes down, the smoky air will have been pushed to Nevada, Idaho and Oregon. "By the time it starts to rain in the Bay Area," he said, "the air should be good enough."

However, while the air might be OK, Gwendolyn Tornatore, a spokeswoman from Save the Bay, said that "unfortunately, the first significant rainfall of the year holds an often overlooked dirty not-so-secret." This is an annual problem to the "first flush," she said, meaning that every year motor oil, cigarette butts, pet waste, pesticides, and other pollutants are picked up by rainwater, she said. That water then enters storm drains, which flow into creeks and ultimately into the bay, which acts as a bathtub for the region that drains into the ocean.

Up closer to the Camp Fire, the runoff from the wildfire is closest to the Feather River Watershed. When the rain comes, scientists say, any toxins and loose debris that have so far burned will eventually drain into surrounding creeks, waterways and eventually Lake Oroville.