At times becoming emotional, McConaughey told stories of meeting with the families of the children killed and how this time things may finally be different with regard to gun reforms.

WASHINGTON - Actor Matthew McConaughey gave an impassioned speech during the White House press briefing on Tuesday, calling for "responsible gun ownership" and highlighting the victims and the families involved in the Uvalde, Texas, mass shooting that took the lives of 19 children and two teachers at Robb Elementary School.

McConaughey recounted his time spent in his hometown of Uvalde, where he met with the parents of children who were killed in the senseless elementary school massacre.

He highlighted the hopeful futures and beloved hobbies some of the victims held dear to their hearts and with a shaky voice, McConaughey repeated, "something is different" with this most recent mass shooting.

"While we honor and acknowledge the victims we need to recognize that this time, seems that something is different. There is a sense that perhaps there is a viable path forward. Responsible parties in this debate seem to at least be committed to sitting down and having a real conversation about a new and improved path forward. A path that can bring us closer together and make us safer as a country, a path that can actually get something done, this time," McConaughey said.

Each parent expressed that they wanted their children's dreams to live on and to continue to accomplish something after they were gone, "They want to make their loss of life matter," according to McConaughey.

He held up artwork from Alithia Ramirez, who dreamed of attending art school in Paris. He told the story of Maite Rodriguez, an aspiring marine biologist. McConaughey's wife, Camila, sitting nearby for his speech, held the green Converse sneakers Maite regularly wore, one she drew a red heart on the right toe to represent her love for nature. And then there was Eliahna "Ellie" Garcia, 10, who loved dancing and church and already knew how to drive tractors. Ellie was looking forward to reading a bible verse at an upcoming church service when she was killed.

McConaughey said that upon his arrival to Uvalde following the massacre on May 24, he and his family could feel "the pain, the denial, the disillusion, anger, blame, sadness, loss of lives, dreams halted" from inside their car. 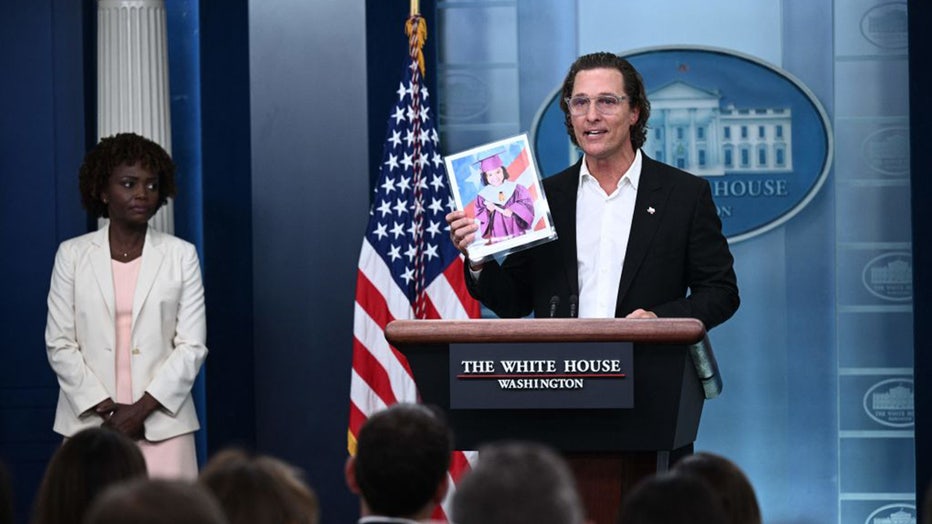 U.S. actor Matthew McConaughey holds a photo of Alithia Ramirez, a 10-year-old student who was killed in the mass shooting at Robb Elementary School, while speaking during the daily briefing in the James S Brady Press Briefing Room of the White House (BRENDAN SMIALOWSKI/AFP via Getty Images)

McConaughey pushed for stricter background checks and raising the minimum age to purchase an AR-15 rifle to 21 years.

"We need a waiting period for those rifles, we need red flag laws and consequences for those who abuse them," he continued.

"These are reasonable, practical, tactical regulations to our nations, states, communities, schools and homes. Responsible gun owners are fed up with the Second Amendment being abused and hijacked by some deranged individuals. These regulations are not a step back, they’re a step forward for civil society and the Second Amendment," McConaughey added.

"Now is this a cure-all? Hell no, but people are hurting. Families are, parents are. And look, as divided as our country is, this gun responsibility issue is one that we agree on more than we don’t, it really is," he said.

The movie star called on lawmakers to rise above party affiliation and to make changes on gun laws quickly.

"Let’s be knowledgeable, and wise, and act on what we truly believe. Again, we got to look in the mirror. Lead with humility and acknowledge the values that are inherent to but also above politics. We got to make choices, make stands and bring some new ideas and preserve the traditions that can create true progress for the next generation," McConaughey added.

McConaughey’s appearance during the White House press briefing comes after a recent op-ed piece in which he repeats his calls for accountability and "responsible gun ownership."

The 52-year-old actor explained the difference between his idea of "gun responsibility" and "gun control."

"There is a difference between control and responsibility," McConaughey wrote in a recent op-ed. "The first is a mandate that can infringe on our right; the second is a duty that will preserve it. There is no constitutional barrier to gun responsibility.

"Keeping firearms out of the hands of dangerous people is not only the responsible thing to do, it is the best way to protect the Second Amendment. We can do both." 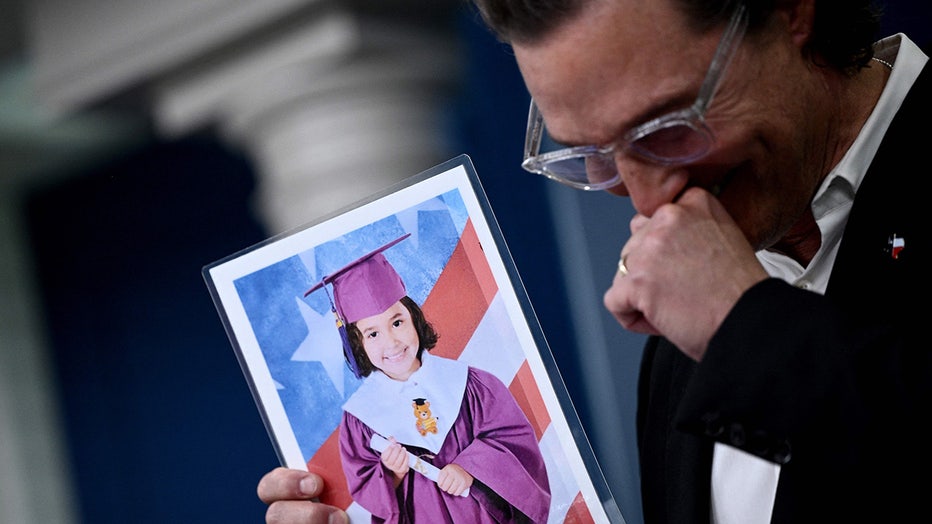 Matthew McConaughey holds a photo of Alithia Ramirez, a 10 year old student who was killed in the mass shooting at Robb Elementary School. (Photo by BRENDAN SMIALOWSKI/AFP via Getty Images)

"Depraved acts of violence, with guns as the weapon of choice, are ripping apart families, tearing at people’s faith, and shredding the fabric of our society. We have an epidemic of indiscriminate mass shootings, of parents burying their children, of inaction, and buck-passing. Saving the unnecessary loss of lives is not a partisan issue."

McConaughey called for lawmakers to require a background check on all gun purchases, increase the buying age to 21, implement red flag laws nationally and institute a national waiting period, in an op-ed published by the Austin-American Statesman.

The actor emphasized that the policies might not "solve" the gun violence issues but believes they are "worth it" if they help reduce the number of tragedies.

"I want to be clear," he wrote. "I am not under the illusion that these policies will solve all of our problems, but if responsible solutions can stop some of these tragedies from striking another community without destroying the Second Amendment, they're worth it."

Salvador Ramos, 18, was identified as the shooter in the Uvalde massacre.

Investigators shed no light on Ramos’ motive for the attack, which also left at least 17 people wounded. Texas Gov. Greg Abbott said Ramos, a resident of the small town about 85 miles (135 kilometers) west of San Antonio, had no known criminal or mental health history.

"We don’t see a motive or catalyst right now," said Steve McCraw of the Department of Public Safety.

Ramos legally bought the rifle and a second one like it, just after his birthday, authorities said.

The Associated Press and FOX News and the Acontributed to this report. This story was reported out of Los Angeles.