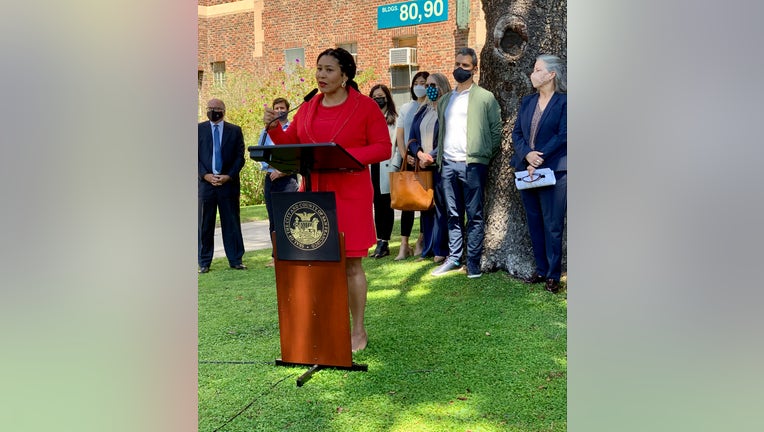 SAN FRANCISCO - San Francisco Mayor London Breed on Wednesday defended her decision not to extend a 90-day emergency declaration for the Tenderloin neighborhood, set to end this week.

Although the emergency declaration is coming to a close, Breed's larger Tenderloin Emergency Initiative will remain ongoing and continue to address a variety of issues that have plagued the downtown neighborhood for years -- homelessness, public drug use, open-air drug dealing and violent crime.

"The challenges in the Tenderloin are decades in the making and they won't be solved overnight, but we are committed to making a difference for everyone who lives and visits the neighborhood. The Tenderloin Emergency Initiative has allowed us to hire hundreds of behavioral health workers and open the Tenderloin Linkage Center in just a matter of months, cutting through the city's bureaucracy," Breed said in a statement.

"Since the emergency was declared, thousands of people have been referred to health and human services, hundreds have received shelter, and tons and tons of trash and debris have been removed from the streets. While we've made noticeable progress, we've made a commitment to the Tenderloin community and we're continuing our emergency response, including assigning dozens of additional officers to the neighborhood to address drug dealing and other illegal activity that cannot be allowed to continue," she said.

The Tenderloin Linkage Center, located at 1178 Market St., opened in mid-January and aims to serve as a one-stop shop voluntarily connecting people living on the streets with services and resources.

According to city officials, between Jan. 18 and March 7, the center had 15,612 visits, and of those, 3,268 people have been connected to resources such as housing or health care programs. In addition, the center has so far helped reverse 35 drug overdoses.

Although the emergency declaration is ending, the city plans to continue using city employees repurposed as disaster service workers at the center through June 30.

According to city officials, as of March 4, the center has been able to place 154 people on track to enter housing programs. Additionally, 345 others have been placed in homeless shelters.

Part of the progress also includes three former Shelter-In-Place hotels that have been converted into shelter spaces, along with the opening of a new Navigation Center in the Dogpatch neighborhood. Also, a new semi-congregate shelter on Post Street is set to open this Spring, city officials said.

While the 90-day emergency declaration didn't authorize more police officers, part of the overall Tenderloin Emergency Initiative includes increased police presence in the area to crackdown on the flow of drugs coming into the neighborhood. This week, the police department deployed 20 extra officers to the Tenderloin station on top of the 90 full-time officers already employed there.

"Even with our historic levels of understaffing, our Tenderloin officers are doing outstanding work to arrest drug dealers and take deadly drugs -- especially fentanyl -- off the street," Police Chief Bill Scott said. "I'm incredibly proud of the heroic and too often thankless work our officers are doing in the Tenderloin."

"We've been screaming for help alongside the residents of this neighborhood," he said. "We've lost nearly 700 people a year in the last two years from drug overdoses... Those numbers have not changed in the last two months since this declaration was in place."

He added, "The conditions in the neighborhood have not changed. The health and safety issues are as real and urgent as ever. The drug dealing and the drug use is very much still there, as bad, if not worse, as before."

City officials have made the data on the Tenderloin Emergency Initiative's progress available to the public at https://sf.gov/tenderloininitiative.