Henry Lee reports on what each side would like to see.

OAKLAND, Calif. - Five Black community members, some of whom have long been critical of police, and all of whom sit on a task force to "reimagine public safety," are imploring Oakland leaders to not simply slash the police budget unless they also find solid ideas for better alternatives.

There are certain elements of policing that are important to keep the community safe, said community activist John Jones III who is formerly incarcerated, a father of three and the current director of community and political engagement at Just Cities.

And it's not safe in Oakland right now, Jones said, noting the rising homicide rate, which is currently at 100 -- a 47% spike from 2019 and the highest number in nearly a decade.

"We support the stated goals of reducing the police budget," Jones said. "But just not at the expense of the safety of the people, specifically Black people."

Specifically, Jones said that in his mind, along with several of his colleagues, resources within the department should be reallocated to be spent on dispatchers to improve police response times, and more homicide investigators.

A shooting near Mills College Monday night is Oakland's 100th homicide, which is the highest total since 2012.

In addition to Jones, the letter was also signed by Oakland Police commissioner Ginale Harris and Keisha Henderson of East Oakland, and Antoine Towers and Carol Wyatt of West Oakland. They introduced their ideas on Wednesday night during a meeting of the 17-member Reimagining Public Safety Task Force Steering Committee. However, the proposal will be formally discussed next month.

"We have come together as Black members of the [task force], who all live in the flatlands of East and West Oakland - the part of the city most impacted by the loss of life and violence that is plaguing our streets," the letter states. "When we signed up to be part of the taskforce, we did so because we fully support the need to reimagine public safety in Oakland. Public Safety must be improved to better serve Black community members- who are disproportionately experiencing and bearing the brunt of crime and violence in Oakland."

"We support the stated goals of reducing the police budget. But just not at the expense of the safety of the people, specifically Black people."

Their letter proposed the following ideas: Police reductions should only be made when a "suitable alternative" is in place that is proven to offer an equivalent or better impact on public safety; the estimated cost savings from a police budget reduction must first be directed toward the suitable alternative response; and anticipated cost savings may be directed toward a non-police response solution.

Jones said there are areas that he and his colleagues would indeed like to see slashed from the police budget. One of the biggest line items, in his opinion, would be Internal Affairs investigators, as there is a Police Commission and an investigative arm of that citizen-led board to look into police misconduct.

The issue comes at a time when Oakland also faces a possible $62 million budget shortfall, driven mainly by police overtime spending -- which totaled $35 million this year.

At a meeting this week, Interim police Chief Susan Manheimer explained the need for police funding, noting the high homicide rate, and the department's need for crime reduction strategies. 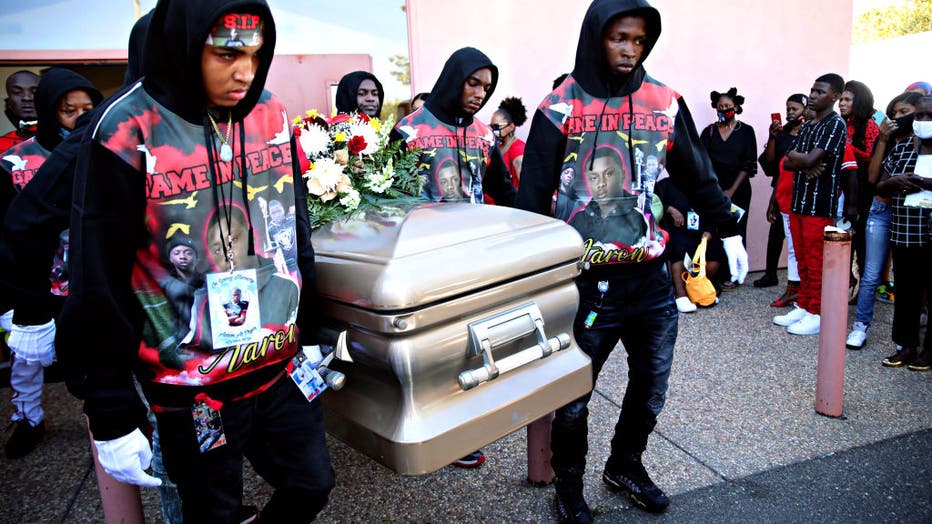 Pallbearers exit B.A.S.I.C. Ministry Church with the casket of Aaron Pryor following his funeral service on Saturday, October 17, 2020. The Oakland City Council created the 17-member Reimagining Public Safety Task Force to figure out how to meet this

In a statement to KTVU, Manheimer said, "We were very encourage to see the guiding principles the group referenced are based on the realities of safety in our communities and not the ideology driving the 'defunding' movement."

Oakland City Councilmember Nikki Fortunato Bas, who has previously supported cutting millions of dollars in funding from Oakland police, said that she remains dedicated to finding alternatives to officers who respond to non-emergency calls. She wants to ensure that social services are funded to help keep residents safe.

“We recognize that the provision of public safety is inequitable across the city, because certainly, our East Oakland communities are more impacted by violence,” she said. “And so as we reimagine safety, and the goal of this task force is to increase safety for everyone, we have to look at how we are much better at spending our dollars, so that’s when officers focus on violent crime.”

The term  "defund police" was used by activists in Oakland and elsewhere for years but gained even more momentum after the death of George Floyd in Minneapolis, where a police officer sat on the Black man's neck for more than eight minutes. The country erupted with chants to "defund police," but as time has worn on, the semantics are not meeting the needs of many communities. 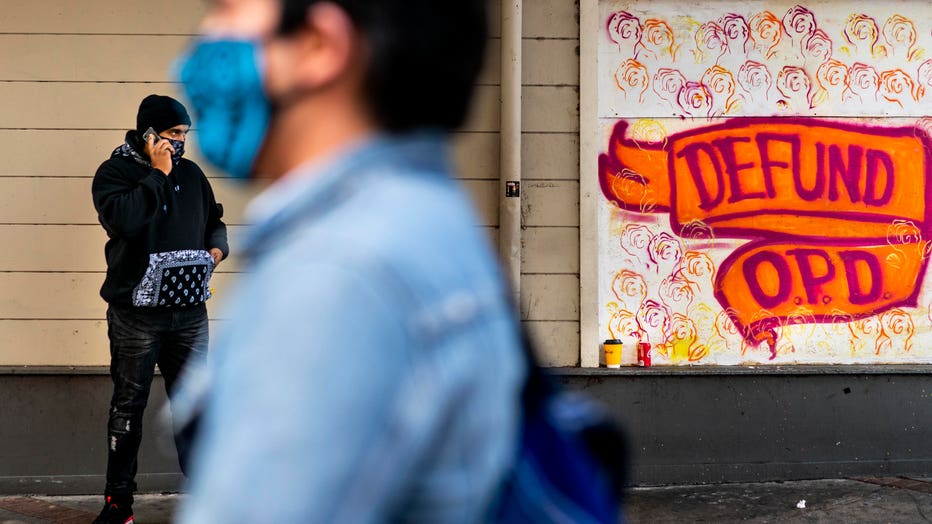 In July, Oakland created the Reimagining Public Safety Taskforce to recommend to the council ideas that would "increase community safety through alternative responses to calls for assistance, and investments in programs that address the root causes of violence and crime" with a goal of a 50% reduction in the Oakland Police Department's General Purpose Fund.

But the vision in Oakland, and across the country, is changing.

Even the city council in Minneapolis, where Floyd was killed and where the homicide rate is also increasing, changed its original goals.

On Thursday, the council decided to shift about $8 million from the police department toward violence prevention and other programs — but will keep the mayor’s targeted staffing levels for sworn officers intact.

The city council had initially approved a proposal to cut the city’s authorized police force to 750 officers, down from the current 888, beginning in 2022. But they changed course late Wednesday after the mayor called the move “irresponsible.” 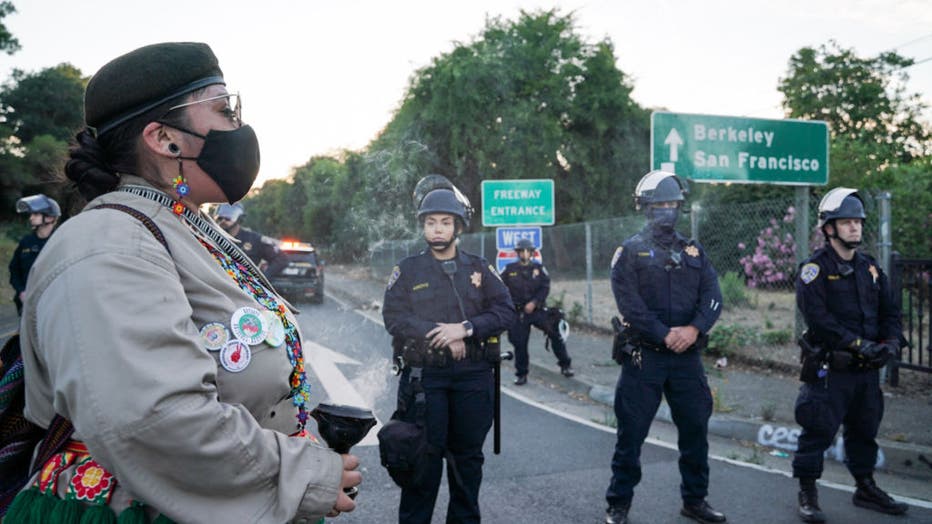 Part of the issue is the messaging of the campaign, said President Barack Obama, who weighed in on the "defund the police" campaign last week, too.

“You lost a big audience the minute you say it, which makes it a lot less likely that you’re actually going to get the changes you want done,” Obama told show host Peter Hamby in an interview with Good Luck America, a Snapchat political show.

But the former president also quickly defended the young progressives who support that mantra and who have sparked rallies and protests over the idea of spending less on police and more on social services.

Jones agrees with Obama. He said that the people who invented the term "defund police," likely created it with a purposeful intention to be vague to spark debate. And the challenge with that message, Jones said, is that people who support this idea don't all share the same philosophical views on it.

As for him, Jones wants to make sure police are to show up at a woman's house when she is getting abused and solve murders in the community in which he lives.

"I want to reduce the police budget," Jones said. "But I definitely want to make sure we're not leaving residents vulnerable."

KTVU's Henry Lee and The Associated Press contributed to this report.