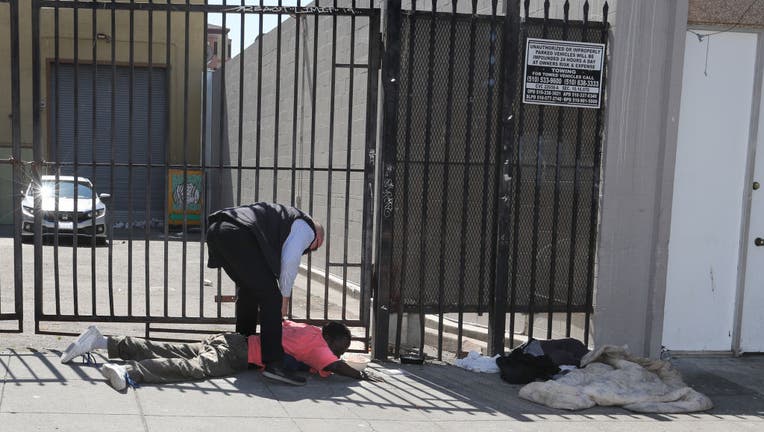 OAKLAND, CA - JUNE 17: One of Governor Newsom's security detail detains a man after he allegedly assaulted the California Governor during a visit to a small business in the seven hundred block of Washington Street in Oakland, Calif., on Thursday, Jun

OAKLAND, Calif. - The big brother Suzette Chaumette remembers was witty and kind, an aspiring historian at the University of California, Berkeley whose promise was derailed by mental illness. Over the decades, he struggled with bipolar disorder, cycling in and out of hospitals and halfway homes and into homelessness.

In June, she saw him on the local news, lying on the ground and under arrest for allegedly throwing a water bottle at California Gov. Gavin Newsom. Authorities called the 54-year-old man "aggressive." It was the first time she had seen him in years.

"I never thought he would be that guy, but he is that guy," she said, crying. "He’s not a bad guy. He’s got great intentions and really would take the help if he was in the right place."

In California, a quarter of the 161,000 people experiencing homelessness also have a severe mental illness. An estimated 37,000 people pinball between nonprofits and public agencies, cycling through ERs, jails and the streets, sometimes for decades, with no one monitoring their overall care in a fractured system that nobody entirely knows how to fix.

There aren't enough places for people like Suzette’s brother, Serge Chaumette, who likely require long-term clinical care, says Paul C. Webster, director of Hope Street Coalition. People with brain disorders need a range of living situations where they can "step down" from oversight as they improve.

But government reimbursement for that kind of care is low to nonexistent, he says. Medicaid, for example, will not pay for treatment in "institutions for mental disease" that have more than 16 beds.

"The public just doesn’t know. They’re mad about all the encampments and people on the streets because they don’t understand what it takes to deal with this other than to clear them out," said Margot Dashiell, vice president of the East Bay chapter of the National Alliance on Mental Illness.

Meanwhile, families suffer quietly. Suzette Chaumette debated talking to The Associated Press about a private pain that spilled into public view only after a chance encounter with the state’s top elected official.

"Mental health is a family issue," she said. "It does not live in isolation."

The June encounter between the governor and Chaumette was brief.

Newsom, 53, was in downtown Oakland to promote small businesses when he was "approached by an aggressive individual," said Fran Clader, spokeswoman for the California Highway Patrol, which provides security for the governor. Newsom appeared unharmed and joked about the incident.

Chaumette was booked into jail and released within a day. He has no cellphone, and his family did not know where he was.

He didn't appear at arraignment hearings the following month in a separate case in which he allegedly spat at an officer in March while being taken to a county-run psychiatric hospital on an involuntary hold.

On Friday, Alameda County deputy public defender Jeff Chorney said Chaumette is receiving care for his illness and that all charges should be dropped.

"We cannot continue to treat people with mental health issues by locking them in a cage," he said in a statement.

Governments at all levels have been disinvesting in mental health for decades. John F. Kennedy wanted to replace state asylums with federal community clinics, but the transition never happened. States started shedding psychiatric beds, and those that are available are increasingly reserved for criminal defendants, the Treatment Advocacy Center in Virginia reported.

Acknowledging such shortcomings, Newsom signed a $12 billion spending plan this year dedicated to homelessness, including converting motel rooms for housing and enhancing facilities for people with addiction and mental illness. More than a quarter of the country’s estimated 580,000 unhoused residents live in California.

"We've got to take accountability, responsibility to do more and do better, and that’s what this budget intends to do," said Newsom, a Democrat.

Teresa Pasquini is a former Contra Costa County mental health commissioner who has documented her family’s struggle to get help for her son, who has schizoaffective disorder. She wondered about the man accused of hurling a bottle at the governor.

"Moms like me kind of go, ‘Is that one of ours? It sounds like it is,'" she said. "There’s nowhere for them to go and so they’re being failed and jailed continuously, and it’s a humanitarian crisis that nobody’s talking about."

Chaumette grew up in Oakland, the only son of accountants who fled political unrest in Haiti when he was a baby. Like many immigrants, his parents worked hard to give him and his sisters a better life: Catholic schooling, music lessons and a comfortable home where the family conversed in French.

Bipolar disorder causes dramatic changes in thinking and behavior. He had his first manic episode in his early 20s, cutting up clothes and smearing car oil inside the house, his sister said.

"That’s when my mom and my sisters and I looked at each other and said, ‘This isn’t normal,’" she said.

It took a long time to get the correct diagnosis, and while her brother had periods of stability, it never lasted. He bounced around agencies, the people tasked with his care did not communicate or left, and there was little consistency, his sister said. Records show he tried to continue his education at UC Berkeley, where he was enrolled off and on from 1987 to 2003.

The last time the siblings hung out regularly was when he lived in a dilapidated Oakland halfway house. But the building burned in 2017, killing four people. Chaumette was among those who became homeless in a city where the average monthly rent for an apartment is $2,700.

"The public’s perception is often that the family threw the individual out, or the family doesn’t care, but very often that’s not the case," said Sinclair Hancq, the research director. "The family has tried."

In Alameda County, where Chaumette was arrested, a Mental Health Advisory Board is calling for more housing, licensed beds and coordination. Board Chair Lee Davis, who also has bipolar disorder, says she's lucky she responds to medication and can maintain a home and job.

But living with the disorder also can mean repeatedly screaming a racial slur to rid it from the universe, thinking her cats’ napping will make up for her lack of sleep, or smashing a window because the "inside and outside needed to merge."

Mania shouldn't be criminalized, she says. "Why is there no number to call to report a mental health crisis?"

Chaumette has been in and out of the criminal justice system for decades, largely for misdemeanors that resulted in probation. It’s unclear what kind of help he may have received through the courts, as health records are confidential and off-limits even to family.

Suzette Chaumette is skeptical of promises by politicians.

"His life is so much more than the mental illness that has gripped him his whole life," she said, adding she wants people to "see him as a human being, not just a case — that he’s really given a chance at life."