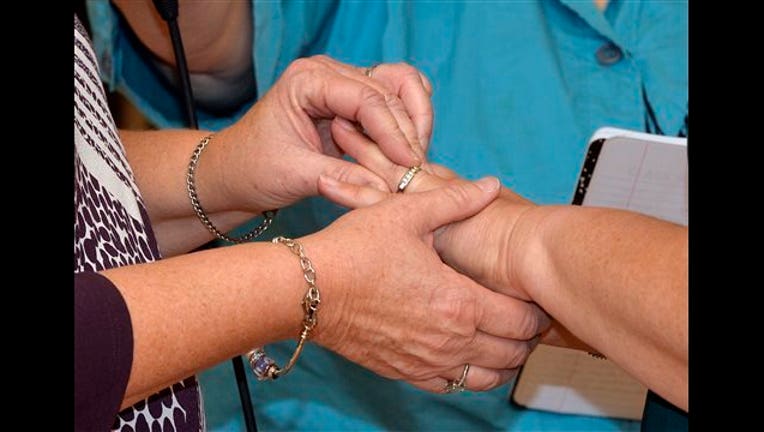 Karen Roberts, left, places a wedding band on the finger of her partner April Miller as they renew their vows in a public ceremony, Saturday, Oct. 24, 2015, in Morehead, Ky. Miller and Roberts were the plaintiffs in a suit filed against Rowan County

MEXICO CITY - Mexican President Enrique Pena Nieto on Tuesday proposed legalizing gay marriage, a move that would enshrine on a national level a Supreme Court ruling last year that it was unconstitutional for states to bar same-sex couples from wedding.

Speaking at an event on the International Day Against Homophobia, Pena Nieto said he signed initiatives that would seek to add same-sex marriage provisions to Mexico's constitution and the national civil code.

Pena Nieto said he would seek to reform Article 4 of the constitution to clearly reflect the Supreme Court opinion "to recognize as a human right that people can enter into marriage without any kind of discrimination."

"That is, for marriages to be carried out without discrimination on the basis of ethnicity or nationality, of disabilities, of social or health conditions, of religion, of gender or sexual preference," he added.

The profile page of Pena Nieto's Twitter account was turned rainbow-colored Tuesday as he made the announcement.

Gay marriage is already legal in some parts of Mexico such as the capital, the northern state of Coahuila and Quintana Roo state on the Caribbean coast. Adding it to the constitution and the civil code would expand gay marriage rights across the country.

Last June, the Supreme Court ruled that it was unconstitutional for Mexican states to ban same-sex couples from getting married. But the decision did not specifically overturn state laws, meaning that couples have had to sue in court in each particular case.