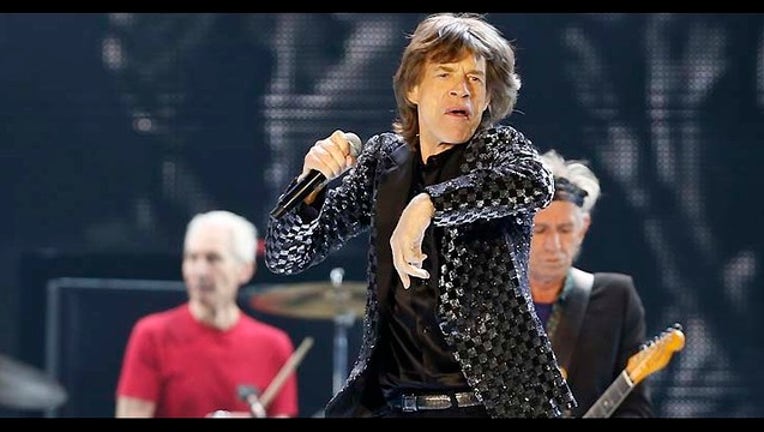 NEW YORK (AP) — The only goal The Rolling Stones have left in their career is to rock on till the wheels fall off.

"The only goal left is to see how far we can run the string," Keith Richards, 71, said, laughing, in an interview Wednesday. "The band feels great about playing. I mean, you couldn't get these guys to do anything if they didn't wanna. It's what we do, so we're just hoping for a great summer."

The Stones — who've played together for more than 50 years — will kick off a 15-city stadium tour of North America on May 24 at Petco Park in San Diego, California.

Mick Jagger, in a separate interview, said the advice he would give other bands who want to play as long as the Stones is to make every show count.

"Every night the audience is like a challenge for me. Every time you go out there it's different. You think it's the same show, but it's a different show, different place, different audience," said Jagger, 71. "For a younger band, you got to bring a sense of uniqueness to every show you do and you got to sort of try somehow to forgot — even though it appears to everyone it's the same show — but to yourself it's always got something different and special about it."

Life on the road isn't for everyone, Jagger said: "I'm not sure if all young bands want to stay on the road as long as we have," he said with a laugh. "Maybe they'll want to do something else."

The band, which includes Charlie Watts and Ronnie Wood, played arenas instead of stadiums for their "50 & Counting" tour in 2012 and 2013. On the Zip Code tour, they will visit AT&T Stadium in Dallas; the LP Field in Nashville, Tennessee; and Comerica Park in Detroit, among other cities.

"Stadiums, I love them, especially when the weather's on our side, when God joins the band," Richards said. "It's really nice to play indoors and auditoriums with a controlled environment, but at the same time, it's a different feeling playing outside, especially stadiums ... It's a looser feeling.

"Mick and I have been talking, 'Maybe we just sort of go up there and play the whole album,'" Richards recalled. "But I don't know if it will come to that."

"There are a lot of ballads on the album so maybe I'll mix up those," Jagger said. "Most of the fast tunes on the album we do quite often, so some of the slow ones we don't."

They will start rehearsals in early May, Jagger said.

"Physically there's quite a lot of workouts and getting your fitness level a bit higher. But I have to do, you know, dance work outs and prep for my dance and prep for the vocals," Jagger said. "You're pushing yourself to a limit, but a containable limit because you don't want to screw up and you don't want to get injured, so you try to get as fit as possible."

Jagger said he listens to a number of genres when dancing, from reggae to blues to rock and electronic dance acts like David Guetta and Calvin Harris.

"Yeah, I listen to that stuff," he said of the international DJs. "And trap (music) and stuff. I put everything on. When I do the dance workouts, I just do a mixture of everything."

Richards said he's completed a solo album that is in "bed and ready to wake up I think later on this year." Jagger has also worked on new music.

"I been writing this week ... I've written a lot of new songs lately, but we haven't recorded them yet," he said, adding that the songs are about "just life in general, different subjects, personal things, social things."

The last stop on the Stones' Zip Code tour is July 15 at the Festival d'ete de Quebec in Quebec City, Canada. But Richards said more dates may follow.

"I hear South America is on the cards somewhere around October, November, so we ain't stopping yet," he said.