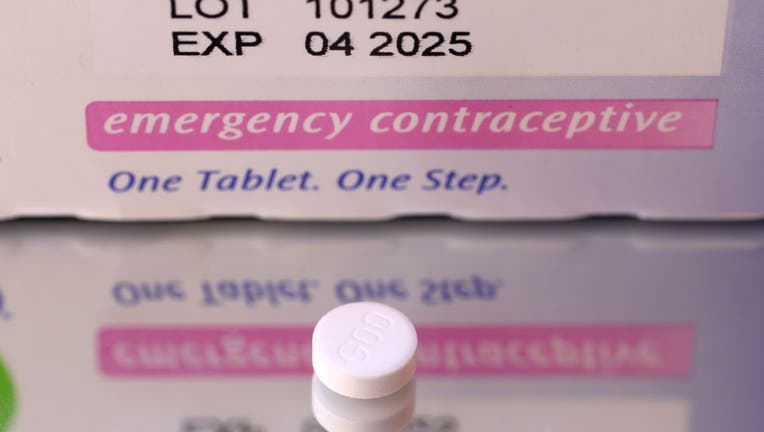 In this photo illustration, a PlanB one-step contraceptive tablet is displayed on June 30, 2022 in San Anselmo, California. Some large drugstore chains are limiting the number of emergency contraception pills sold to individuals as demand for morning ((Photo Illustration by Justin Sullivan/Getty Images))

(FOX 9) - In a landmark case, a jury found a Minnesota pharmacy didn't discriminate against a woman who was denied the morning-after pill in 2019, but the jury did award her $25,000.

According to court documents, the pharmacist at McGregor Pharmacy did not discriminate against Andrea Anderson, a mom and foster parent, but awarded her money for emotional harm caused by the pharmacist. The lawsuit sought an excess of $50,000.

"I can’t help but wonder about the other women who may be turned away," Anderson said in a statement. "What if they accept the pharmacist’s decision and don’t realize that this behavior is wrong? What if they have no other choice? Not everyone has the means or ability to drive hundreds of miles to get a prescription filled. I can only hope that by coming forward and pursuing justice that others don’t have to jump the ridiculous hurdles I did."

The lawsuit was filed on behalf of the woman by lawyers working with St. Paul-based Gender Justice. The lawsuit sought a court order prohibiting pharmacists in Minnesota from refusing to fill emergency contraception prescriptions, as well as monetary compensation and damages.

"To be clear, the law in Minnesota prohibits sex discrimination and that includes refusing to fill prescriptions for emergency contraception," Gender Justice Legal Director Jess Braverman said in a statement. "The jury was not deciding what the law is, they were deciding the facts of what happened here in this particular case. We will appeal this decision and won’t stop fighting until Minnesotans can get the health care they need without the interference of providers putting their own personal beliefs ahead of their legal and ethical obligations to their patients."

The court case has been watched across the country.

What the lawsuit alleges

Jury selection began today in the trial of a pharmacist who allegedly refused to fill a prescription for a contraception – a case that could be a litmus test for future legal precedent.

According to the complaint, Andrea Anderson, a mother of five and a licensed foster parent, obtained a prescription from her doctor for Ella, a "morning after pill" form of emergency contraception medication, on January 20, 2019, after her partner's condom failed.

The couple had lived in McGregor, Minnesota, a small town in Aitkin County with a population of about 392 people at the time, for several years. The town only had one pharmacy, McGregor Thrifty White Pharmacy, operated by Aitkin Pharmacy Services, where Anderson's doctor sent the prescription, according to the lawsuit.

However, when Anderson called the pharmacy to make sure the medication would be covered by her insurance, she received a call back from the pharmacist on duty, George Badeaux, who told her that he could not fill the prescription because of his "beliefs," according to the complaint.

Badeaux also allegedly told Anderson that she should avoid going to another nearby pharmacy and that another pharmacist who worked at the pharmacy might be able to help her when he started his shift later that day — but that was a snowstorm coming, and that pharmacist might not make it into work, the complaint says.

Anderson, who was trying to act quickly because "any delay in obtaining the medication increased the risk of pregnancy," then called a CVS pharmacy in Aitkin, Minnesota. A female pharmacist there told Anderson that she would not be able to fill the prescription, according to the complaint.

The complaint says that the CVS pharmacists went on to tell Anderson that the Walgreens in Brainerd also would not be able to fill the prescription, but when Anderson later called that Walgreens directly, she got a different story.

The complaint says that eventually, Anderson was able to find a pharmacy to fill the prescription, but it was one 50 miles from her home. By that time, a "massive snowstorm" had begun to hit central Minnesota, and it took Anderson over three hours to drive the 100-mile round tip, which was about an hour longer than it would have taken normally.

The complaint says that the pharmacies — the McGregor Pharmacy and the CVS in Aitkin — and their employees violated the Minnesota statutes against discrimination because they "singled out health care only people who may become pregnant need--emergency contraception-- and refused to provide it."

It also alleges that the defendant tried to prevent Anderson "from obtaining the care from others by putting delays and obstacles in her path, failing to provide her a reasonable alternative, and in one instance, apparently deceiving her about where she could obtain care."

‘First of its kind’ case

Gender Justice, the organization representing the plaintiff, claims this is a "first of its kind" case. While there have been several lawsuits nationwide of pharmacists refusing to fill emergency contraception prescriptions due to personal beliefs, this one is being argued as a gender discrimination case.

"What makes this case unique is approaching the issue from a different direction," said Mitchell Hamline law professor David Schultz. "It's taking a body of law that’s been out there for many years and using it in a way it's never been used before."

A judge in the case ruled that because of its filing under the Human Rights Act, the pharmacist cannot use his religious beliefs as a defense during the trial.

University of St. Thomas law professor and director of the school’s Pro-Life Center Teresa Collett says not allowing the defendant to speak to his religious freedoms is a constitutional violation in itself.

"When we start telling people, you can be sued in court and the court gets to tell you how you get to explain your motivation – that’s problematic," she said. "That’s a constitutional violation in itself."

Both Collett and Schultz agree that no matter what the jury decides in Aitkin County, the decision is likely to be appealed.