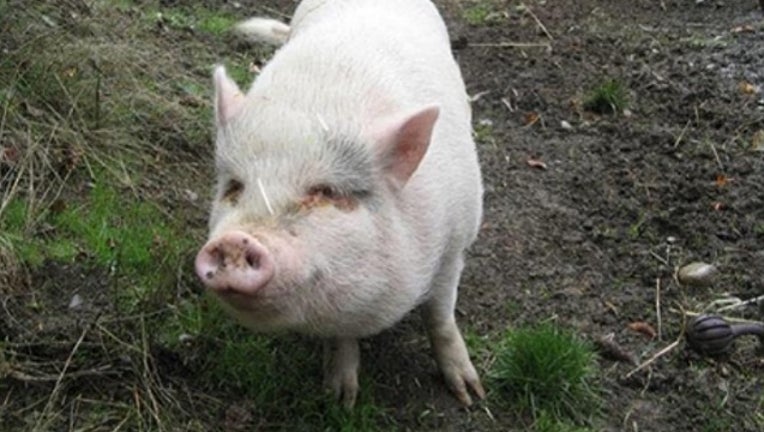 Animal lovers are outraged after learning a beloved pig that was nursed back to health and later adopted in Canada was killed and eaten by its new owners. (Photo via Facebook)

(FOX NEWS) - Animal lovers are outraged after learning a beloved pig that was nursed back to health and later adopted in Canada was killed and eaten by its new owners.

Molly was one of 57 pot-bellied pigs rescued from a hoarding situation in Duncan, British Columbia, last May by a local branch of the Society for the Prevention of Cruelty to Animals (SPCA).

The Vietnamese pig, according to CBC News, found its forever home in January — but just weeks later, was eaten by its new owners – a Vancouver Island couple — after the family reportedly encountered problems training the pig.

The people who initially rescued Molly told the news outlet the that the first thing they felt was “shock” and “heartbreak.”

“All the animals that come through our care or branches we get attached to," Leon Davis, of British Columbia’s SPCA, said. "To hear that somebody did this to an animal that we worked so hard to make sure was healthy, and tried to get into a good home, is absolutely heartbreaking."

RASTA Sanctuary, which was also involved in Molly’s rescue, added that their rescuers feel “absolutely gutted and truly beyond devastated.”

The sanctuary had a similar sentiment.

“It takes a special type of person to adopt an animal from a rescue organization simply to take them home to kill them, and eat them,” the group posted.

“We have stringent policies in place as part of the adoption process for all the animals we have here, which include dogs, cats and goats right now,” Sandi Trent of the British Columbia SPCA said. “We also have long conversations with the people looking to adopt animals to make sure the animal is right for them.”

An SPCA official told the Cowichan newspaper that, since animals in Canada are considered property, it loses its legal rights to animals once they’re adopted.

British Columbia SPCA’s Davis added that animal cruelty laws in Canada only apply when an animal suffers. He said the organization would have taken Molly back if the owners said they were having issues with her.

Molly’s adopter has since been blacklisted from the SPCA’s database and will not be allowed to adopt through the group again, per reports.