BOISE, Idaho - Police say the mother of two missing kids has been found in Hawaii along with her new husband, but there's still no sign of the children in the cross-country investigation that includes several mysterious deaths.

Police in Kauai pulled over Lori Vallow and Chad Daybell near a beachside resort on Saturday, later searching them and their car for any evidence.

Police in Kauai pulled over Lori Vallow and Chad Daybell near a beachside resort on Saturday. (eastidahonews.com )

But authorities in Idaho say there's no sign that 7-year-old Joshua "JJ" Vallow and 17-year-old Tylee Ryan ever made it to Hawaii, and federal, state and local law enforcement agencies are still searching for the kids who haven't been seen since September. 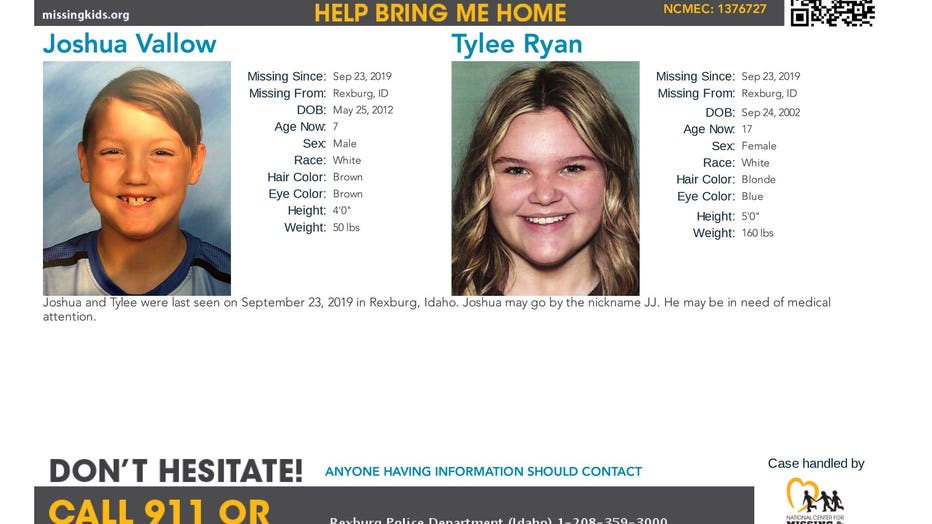 The Rexburg Police Dept. posted this flyer on its Facebook page on Dec. 20, 2019, urging the public to help locate "these two missing endangered children."

They also served Vallow with a court order from Idaho, directing her to bring her kids to the Idaho Department of Health and Welfare by Thursday or face legal action. Still, neither Lori Vallow nor Chad Daybell have been charged or arrested in connection with the matter, Kauai police said Sunday in a prepared statement.

The strange case began last July, after Vallow's estranged husband Charles Vallow was shot and killed by her brother, Alex Cox, in an altercation at their home in Phoenix. At the time, Cox said the shooting was in self-defense, but the case remains under investigation. In December, Cox also died of unknown causes, and police in Gilbert, Arizona, are still waiting for toxicology test results in his death investigation.

Lori Vallow moved to eastern Idaho with the kids about a month after Charles Vallow's death. Extended family members grew concerned as their contact with the kids tapered and then stopped completely, and police in Rexburg, Idaho, say the children were last seen in late September, though Vallow never reported them missing.

Meanwhile, investigators just one county away were also digging into a mystery. Daybell's last wife, Tammy Daybell, died of what her obituary said was natural causes on Oct. 19. Chad Daybell married Vallow about two weeks later.

In November, responding to concerns from extended family that they hadn't heard from the children, Rexburg police paid a visit to Vallow to ask her and Daybell about the kids. The couple told officers the kids had gone to live with relatives in Arizona, police said -- a claim they quickly discovered wasn't true. When investigators returned to Vallow's home the next day, the couple was gone.

The Fremont County Sheriff's office began to question the circumstances surrounding Tammy Daybell's death. They worked with authorities in Utah, where she was buried, to have her body exhumed for an autopsy and additional testing in December.

The county is still waiting on forensic tests of Tammy Daybell's remains and items seized from the home, Humphries said, calling Chad Daybell a person of interest in the death and in the case of the missing kids.

"Of course, for Lori to present the kids, that would solve a lot problems, but we're also waiting for test results to happen," Humphries said Monday.

Madison County Prosecutor Sid Brown was still in Hawaii on Monday and unable to immediately be reached to answer questions about whether Vallow would face civil or criminal contempt of court charges if she failed to produce the children by the deadline.

The Vallow family has ties to Hawaii, and Lori Vallow was previously listed as a registered agent for a business there, according to state records. Vallow and Daybell had been staying on Kauai for an "unconfirmed period of time," the Kauai Police Department said.

"KPD's desire is to continue to assist the Rexburg police in whatever way we can with their efforts to locate the missing children," Kauai Police Chief Todd Raybuck said in a prepared statement. "It's our sincere hope that the children have a safe return."

Rexburg Police Capt. Gary Hagen said he couldn't release many additional details on the case because of the ongoing investigation, which now includes state and local law enforcement agencies in at least four states as well as the FBI.

Child protection cases are normally sealed, but the Madison County Prosecutor's Office was given permission from the court to reveal that a child protective action had been taken in regards to Tylee Ryan and JJ Vallow, along with the order directing Vallow to produce the kids.

JJ Vallow's grandparents, Larry and Kay Woodcock, announced a $20,000 reward for information leading to the discovery of the children earlier this month. They say they believe Charles Vallow was murdered, and said Lori Vallow and Chad Daybell had cult-like beliefs. They also said Charles Vallow was so worried that Lori would kill him during their divorce that he sought out a protection order.

Divorce documents filed by Charles Vallow last February claimed that Lori believed she was a "translated being" and "a god assigned to carry out the work of the 144,000 at Christ's second coming in July 2020."

Chad Daybell also appears to have somewhat unorthodox beliefs. He has claimed in blog posts and podcasts that he had previously died or had near-death experiences that he said allowed him to receive visions about the future. He also wrote and published several books themed around the apocalypse and at least loosely based on the theology of The Church of Jesus Christ of Latter-day Saints.