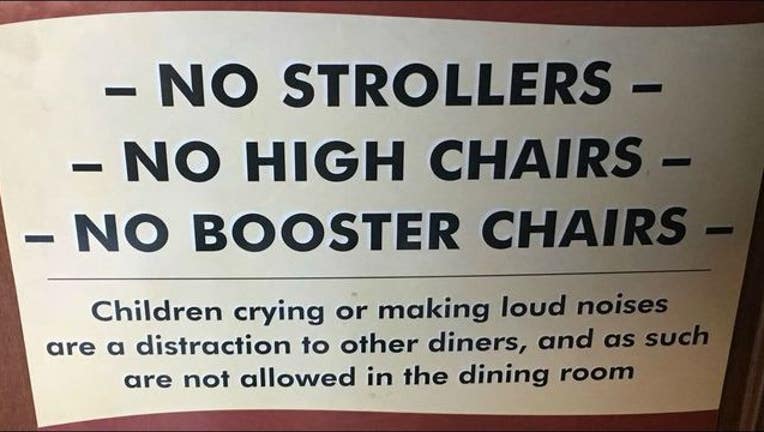 MONTEREY, Calif. (KTVU) - A restaurant on Monterey's touristy Fisherman's Wharf is once again gaining attention with a new crop of moms for its anti-children policy.

A sign placed outside of Old Fisherman's Grotto boldly states, "No strollers, no high chairs, no booster chairs. Children crying or making loud noises are a distraction to other diners, and as such are not allowed in the dining room."

Angela Espinoza of Pittsburg posted about the restaurant's policy in a Facebook group that's geared toward Bay Area moms. Espinoza wrote, "Whoa. I’ve never seen this before. I’m canceling my reservation at the restaurant after seeing this picture on Yelp - and I will not even have my toddler."

Espinoza, the mother of a 19-month-old boy, tells KTVU she had planned to celebrate her four-year anniversary with her husband at Old Fisherman's Grotto.

Although the couple will be spending their first weekend away from their son, the self-described seafood lover says the restaurant no longer appeals to her. "The sign is discriminating toward any children who need a booster seat and younger no matter what...  I also feel it’s the wording, it’s not nice at all. Maybe 'adults only' would be more understandable," she said.

On Yelp the reviews are mixed. Some despise the policy, while others seek out the restaurant solely for a dining experience sans noisy children.

Yelp user Robin M. of Oakland went to the restaurant with her kids, unaware of the unusual rule. "At one point, another waitress told us people were complaining about our kids and could they be quiet. I've never been told to hush my kids before. When I made a comment to the waitress she told me there was a sign outside with rules for children... They are apparently not joking. She was not just unapologetic but incredibly rude about the whole incident."

Meanwhile, Yelp user Alondra J. of San Francisco approved of the restaurant's policy. She wrote, "No strollers, no boosters, no highchairs. This is what got me to go into this restaurant! Just the thought that I would be able to have a peaceful meal with no kids yelling, sometimes it's needed. In all seriousness people need to not get so hurt by this. There was (sic) definitely kids inside the restaurant when we dined in."

KTVU reached out to the restaurant's owner Chris Shake who is unapologetic about the policy saying it's actually good for business.

Shake says the restaurant, which has been in business since 1950, has become well known for its quiet dining experience. "We have many families who dine with us with their children who are well behaved and understand our policy with respect to other diners. What we have found on those who write negative reviews about our policy are those who have not dined here but become offended by the sign and our policy," he said.

He said they made sure the language on the sign was approved by an attorney and would not be discriminating toward anyone. The sign has been up for years - but it continues to make the rounds as new families encounter the policy.

Shake echoes some of the Yelp reviews saying a lot of diners seek out the restaurant because of the policy.