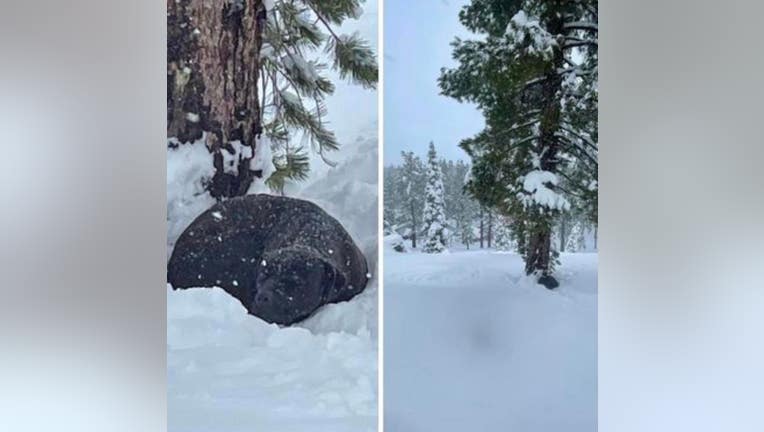 A skier found Russ stranded on a mountain near South Lake Tahoe on Dec. 16. The dog had been separated from his owner back in August during the Caldor Fire.  (TLC 4 Furry Friends & Tahoe PAWS)

SOUTH LAKE TAHOE, Calif. - An incredible story of survival has emerged after a dog that went missing during the Caldor Fire near Lake Tahoe last summer, was recently rescued and reunited with his owner some four months after his disappearance.

Russ, a pit bull-terrier mix, got separated from his owner last August, when he got startled and bolted from the owner's vehicle, according to rescue officials with the non-profit TLC 4 Furry Friends & Tahoe Paws. The owner had been in the Tahoe area for a temporary job and was among the tens of thousands of people who were ultimately forced to evacuate because of the fast-moving and destructive Caldor Fire.

The owner searched for his dog and reported him missing, but when the animal did not turn up, "It was assumed that Russ had been lost for good," the non-profit said.

Last month, a backcountry skier near Twin Peaks, west of South Lake Tahoe came upon a dog that appeared to be in distress, a discovery that would later serve as a reminder of the resiliency of animals and their instinct to survive.

"It was in the snow, apparently unable to move, and was growling at the individuals who observed it," TLC 4 Furry Friends & Tahoe PAWS shared on Facebook on Tuesday.

Volunteers from the group strapped on their snowshoes, grabbed their dog rescue equipment and set out to retrieve the animal.

The conditions were challenging as the rescue team trekked up the mountain amid frigid temperatures, through five feet of fresh snow, being blanketed by nightfall.

They finally located the animal. He was under a tree. He was not moving, bringing initial fears that the dog was dead. But he quickly gave them a sign that brought the team great relief.

"The volunteers were elated when he opened his eyes and lifted his head," the non-profit said. 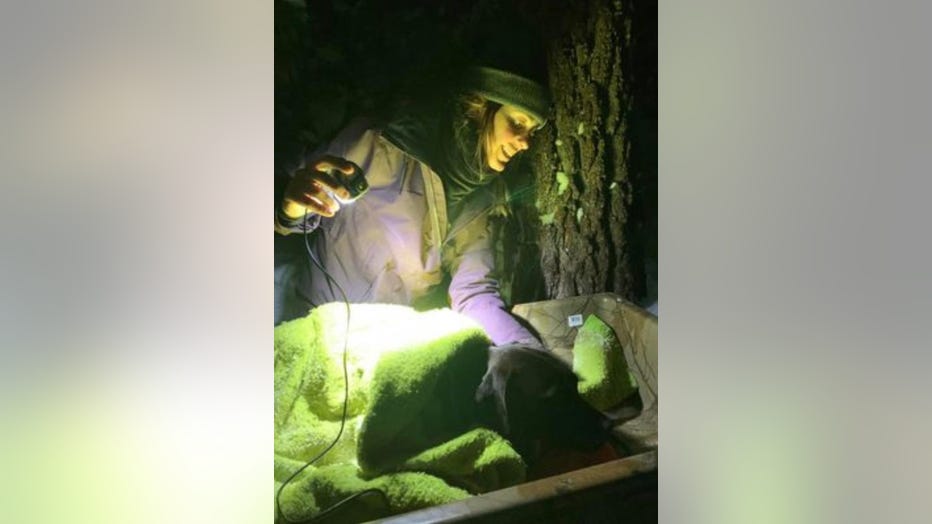 Some four months after getting separated from his owner back in August during the Caldor Fire in the Sierra Nevada, Russ was found stranded on top of a snowy mountain. Volunteers rescued him, and he was later reunited with his owner.  (TLC 4 Furry Friends & Tahoe PAWS)

The rescuers then worked to carefully move the weak animal onto a sled. They made an effort to keep him warm and calm by placing him on top of a volunteer. The rescue operation took several hours with the team taking a "slow and methodical" ride down the mountain in the darkness of the night. 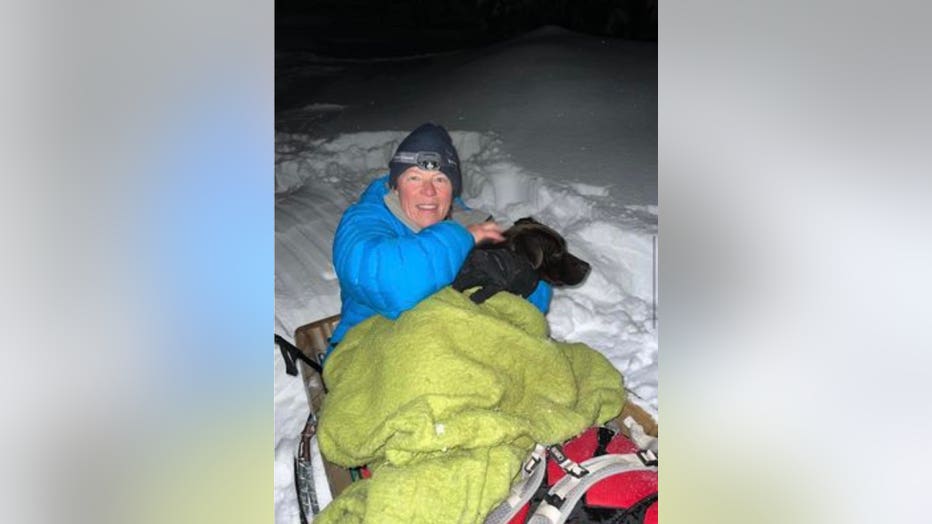 Lost dog that was rescued near South Lake Tahoe on Dec. 16, 2021, was placed on top of a volunteer on a sled. The dog disappeared in back in August, after getting separated from his owner during the Caldor Fire. (TLC 4 Furry Friends & Tahoe PAWS)

Once they made it down, the dog was turned over to an officer with El Dorado County Animal Services, who then brought him to a veterinarian to be evaluated.

TLC 4 Furry Friends & Tahoe PAWS founder and Executive Director Wendy Jones did not go up for the rescue but kept in continual contact with the team during the operation. She told KTVU, for the most part, the dog was in pretty good shape.

After his rescue, animal care officers were able to locate his microchip, which led them to his owner in Riverside County.

"When contacted, the owner was ecstatic to find out that his dog was alive!" TLC 4 Furry Friends & Tahoe PAWS said.

Jones said Russ did what he had to do to survive, and when he first got away, was likely running around with the bears and other wild animals in the area fleeing from the raging fire.

"We don't give them enough credit," Jones said. "They go into survival mode… fight or flight. They find a safe place to hunker down, and they find food and water."

Jones said surveillance cameras caught video of a dog, believed to be Russ, in a stand-off with a coyote.

After Russ was rescued and his owner contacted, it would still be some 10 days before the reunion could happen. The snow storms that hit the region last month made travel to the Sierra difficult, so Russ was in the care of animal services, prompting volunteers to step in again to help bring comfort to the dog that had gone through so much.

"With the assistance of EDC Animal Services, volunteers with TLC 4 Furry Friends & Tahoe PAWS visited Russ every day to remind him that he was loved until he could make the journey home." 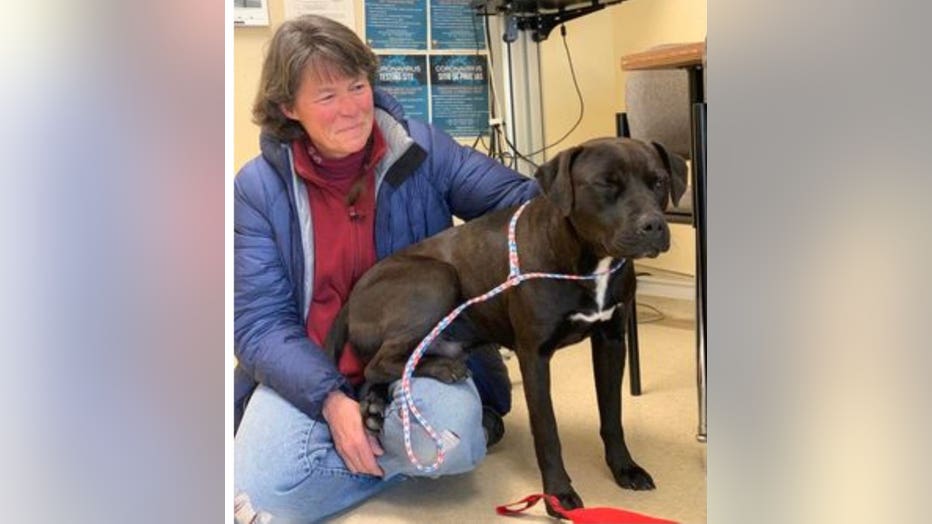 On Dec. 26, the reunion finally happened.

The group also said that it would love to get in touch with Russ’s owner. Because officers with animal services took the lead on reuniting the pair, TLC 4 Furry Friends & Tahoe PAWS did not get a chance to directly make contact with the owner.

"We would love to hear from him," Jones said, calling Russ "such an amazing dog." She said the non-profit's volunteers were eager to see photos and get an update on how the dog was doing.

The group noted that this story served as an important lesson for people to microchip their pets and their keep registrations up to date.

The non-profit also said that Russ’s story served as a reminder of the resilient nature of these incredible animals.

"The biggest thing to learn for everyone," Jones shared, "You never give up. People give up way too soon. Dogs are strong and smart and are survivors."