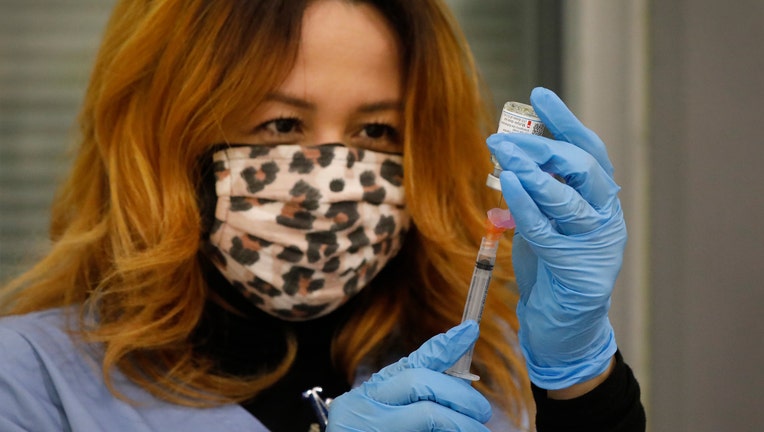 Newsom said when he announced the change in January that he wanted a seamless system to tell him where doses are, who has received them and who needs to get them. Counties used to setting their own rules on vaccine eligibility will have to follow uniform state rules.

Insurer Blue Shield of California is on track to take full administrative control of the network March 31, said the company’s president and CEO, Paul Markovich. Blue Shield received a $15 million fast-tracked, no-bid contract from the state to set up and oversee the system to deliver vaccines quickly and equitably.

WHICH COUNTIES ARE ON BOARD?

California’s public health department announced last week that eight counties and the city of Long Beach have signed memoranda of understanding with the state to follow certain rules so they will receive doses. The counties are Los Angeles, San Diego, Riverside, Ventura, Kings, Lake, Shasta and Siskiyou.

Separately, Kern County signed a contract directly with Blue Shield, but this model was dropped after other counties said they would prefer to contract with the state. Those that have signed agreements with the state or Blue Shield represent 10 health jurisdictions among the 58 California counties and three cities that operate their own health departments.

Blue Shield is still signing agreements with providers such as health centers, community clinics, pharmacies, and hospitals to make sure people can get to providers within 10 miles (16 kilometers) for urban areas and 30 miles (48 kilometers) for rural areas, the insurer said.

WHAT DOES IT MEAN TO BE PART OF THE STATE SYSTEM?

Providers must follow certain rules, including using the state’s online appointment portal called "My Turn." Counties are prohibited from reallocating vaccines without state approval. They must also follow state criteria on eligibility and on opening up appointments to vulnerable communities.

Counties have complained about My Turn, saying it is not as efficient as their appointment systems for inoculating specific sectors of the population, such as farmworkers and teachers. Markovich said 38 of the state’s 61 local health jurisdictions have switched to My Turn and that as of last week, all but two were on track to do so. Kaiser Permanente, which offers health plans and health care, has transitioned to My Turn, he said.

"We’re pleased with the progress we’ve made on My Turn, we’re not satisfied with it yet, it needs to improve," he said, adding that some of the glitches are due to human error. "The onboarding training and operations of it needs to get better."

Likewise, Contra Costa County on Monday opened up vaccinations to residents and workers 50 and older, saying it had received extra from the federal government.

After the transition is complete, Blue Shield officials will continue to recommend that providers and counties that have not agreed to the terms of the state plan continue receiving vaccines so long as they are negotiating in good faith.

But if they are not deemed to be negotiating in good faith, Markovich said that Blue Shield will make recommendations for the state to allocate vaccines to others in the network.

Second doses will not be held back from providers that do not sign up with Blue Shield, Markovich said.