SACRAMENTO, Calif. - More Californians will be subject to stay-at-home orders as the Sacramento region reported its intensive care units were filling up, the state said Wednesday.

Health officials said in parts of the Bay Area, subject to stay-at-home orders to alleviate pressure on hospitals, ICUs were at or near capacity and first responders were under strain from the surge in coronavirus cases.

The Greater Sacramento region became the third of California's recently created five regions to trigger the stay-at-home order when ICU capacity fell below 15%. State data showed that ICU capacity in hospitals in counties around Sacramento was at 14.3%. The Southern California and San Joaquin Valley regions have been well below that threshold. 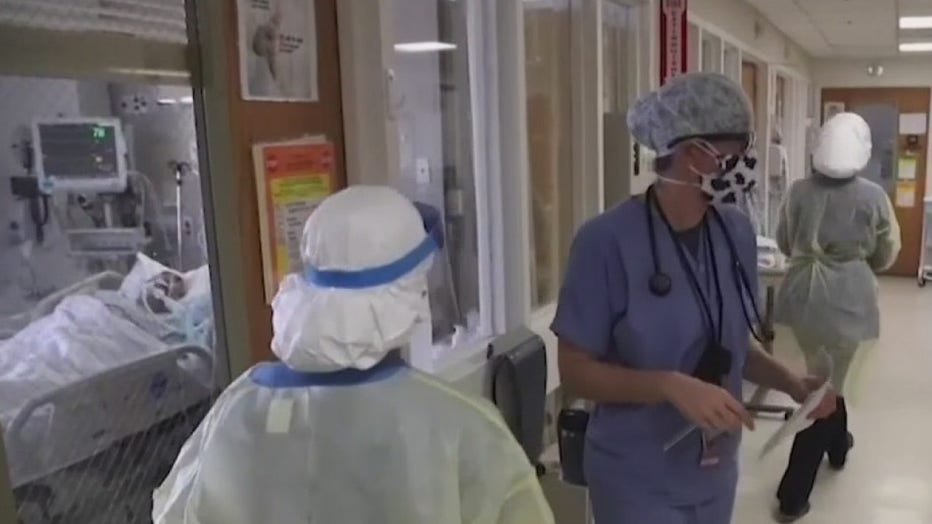 The Greater Sacramento order to stay home takes effect Thursday, according to reports. The region covers Lake Tahoe too, which means that tourists are not supposed to travel to ski resorts and other locations for winter activities while the order is in effect.

While the numbers of cases show no signs of slowing down, the state reversed a policy on playgrounds, exempting them from the stay-at-home shutdown.

The Bay Area region was at 20.9% capacity, according to the daily data, but Alameda, Contra Costa, Marin, San Francisco and Santa Clara had opted to impose a shutdown earlier than the state required. The order eliminated dining at restaurants, reduced the number of people allowed in retail areas and halted additional school reopenings, among other rules that are part of the stay-at-home rule.

One South Bay hospital says its intensive care unit is now full, and the surge in coronavirus cases in Santa Clara County is to blame.&nbsp; Allie Rasmus reports

“We are continuing to see more and more patients at record numbers every day coming into our emergency rooms and hospitals,” Kamal said in a press conference Wednesday. “We know that of every patient diagnosed with COVID, 10 to 12% will need hospitalization, and about 25 to 35% will need ICU level care.” Kamal said.

San Jose Regional Medical Center, O’Connor Hospital and Saint Louise Hospital all reached their capacity Tuesday. Hospitals report their daily numbers to the county and they had not yet sent in new figures by Wednesday’s 1 p.m. press conference.

After San Jose Regional Medical Center reached its capacity on Tuesday, all hospitals in the county began organizing a mutual aid plan. Kamal called this collaboration a real “bright spot” in the pandemic but was clear he’s concerned.

“We are very troubled by that,” Kamal said. “We do fear this may spread to other hospitals.”

County health officials also presented their vaccine plan to the Health and Hospital Committee on Wednesday.

California will have 320,000 doses of Pfizer's product and Santa Clara County expects over 17,000 as soon as December 15.

Later in the day, Gov. Newsom tweeted the state will now receive approximately 672,000 doses of the Moderna vaccine and it will arrive in the next few weeks. It's not yet clear how many doses will be allotted for the South Bay.

The hospital picture in San Francisco was less severe than other counties, but by no means rosy. The city reported 123 COVID-19 positive patients are currently hospitalized across San Francisco, the highest number recorded during the pandemic.

"We are in the middle of a massive surge in San Francisco of COVID-19 cases, by far the worst surge to date," said Dr. Grant Colfax.

Colfax said San Francisco expects to have 12,000 doses of the Pfizer vaccine by next Tuesday once it is approved for emergency use by the U.S. Food and Drug Administration.

Colfax predicts ICU beds in San Francisco will run out by Dec. 27 if the current situation doesn't improve.The forecasted peak of hospitalized COVID-19 patients will be on Dec. 21, when 200 people will be hospitalized, said Colfax.