Roughly 25 managers at the federal prison in Dublin are getting reassigned across the country – perpetuating a problem, not solving it, a union official told KTVU.

DUBLIN, Calif. - Roughly 25 managers at the federal prison in Dublin are getting reassigned across the country – perpetuating a problem, not solving it, a union official told KTVU.

John Kostelnik, Western Regional vice president of the union representing correctional officers at FCI Dublin, said that the managers were handed letters on Tuesday, telling them they were going to have new jobs in places such as Victorville and Atwater, Calif.; Texas and Miami.

The letter, part of which was obtained by KTVU, was signed by Regional Director Melissa Rios, telling the employees they had to report to their new jobs by Aug. 15, or face "administrative action up to and including removal."

A representative from FCI Dublin did not immediately respond for comment on Thursday to explain the rationale behind the reassignments. 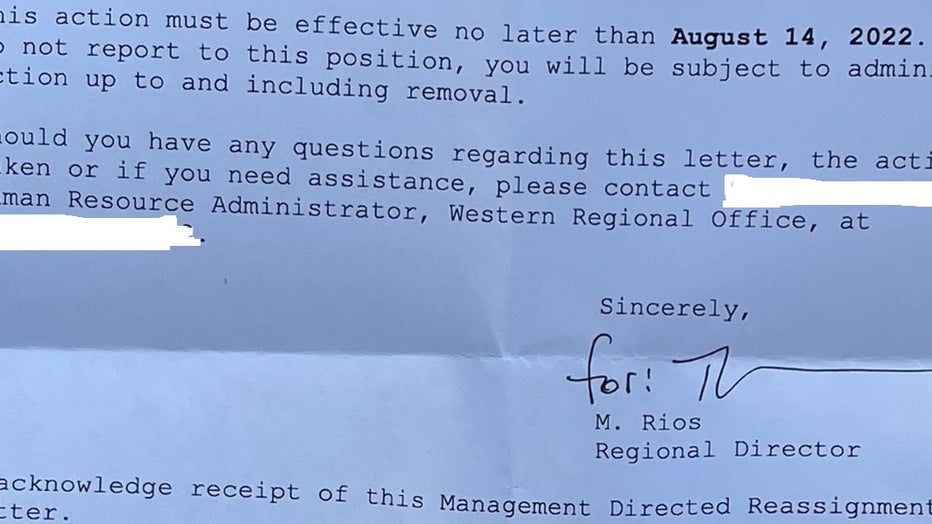 A partial reassignment letter from FCI Dublin was obtained by KTVU.

FCI Dublin, one of seven all-women federal prisons, has been in the national spotlight after five correctional officers – including the warden – were charged with having sex with incarcerated women.

One of the women, Andrea Reyes, told KTVU in an exclusive interview that not only did an officer rape her, but he dipped into her mental health files to find her triggers and further manipulate her. He is scheduled to be sentenced in August.

Kostelnik said some of the managers on the reassignment list are part of the problem and "definitely need to go."

Still, he added, moving these managers to other prisons doesn't seem to be the answer.

"So now they'll have problems in Victorville and Atwater," he said.

But there were also many good managers who provided the union "intel" on bad behavior inside prison in an effort to root out the toxic "rape culture," Kostelnik said.

And in his opinion, these managers should not be forced to move.

"These managers were speaking up," Kostelnik said. "And giving us info. We just lost our ears."

Change should come from the top, Kostelnik said, which doesn't seem to be happening.

He was highly critical of Rios, and Deputy Regional Director T. Ray Hinkle, who delivered the reassignment news in person on Tuesday, and both of whom will be staying on.

In March, the Associated Press reported that is the Department of Justice was looking into accusations that Hinkle tried to silence a female employee who said she had been harassed by a manager at the prison by meeting with her personally in violation of established protocols.

Hinkle, who pledged to staff that he would help Dublin "regain its reputation" during a stint as acting warden that ended this week, was also admonished by his bosses at the federal Bureau of Prisons for sending all-staff emails that were critical of agency leadership and policies.

In one email, Hinkle complained that he was unable to defend himself in an AP story last week about allegations that he bullied whistleblower employees, threatened to close Dublin if they kept speaking up about misconduct, and stonewalled a Congresswoman who sought to speak candidly with staff and inmates at the prison last month, the AP reported.

Hinkle didn’t respond to email and text messages seeking comment by the AP. He previously said that he was not authorized to speak with the media.

And as for Rios, Kostelnik and 16 other prison union presidents wrote her in April saying they had no confidence in her leadership.

"Those entrusted in the highest of positions under your leadership have failed and even committed crimes," their letter stated. "Whistleblower protection and rights have not only gone ignored but have been blatantly violated."

Based on experience, Kostelnik said he is fearful that these two, along with the new warden, Thahesha Jusino, will select a new round of "yes-men" to replace the managers they are pushing out.