A recent article published in over 200 accredited medical journals warned that climate change is the "greatest threat to global public health."

Ahead of the biodiversity summit and climate conference (COP26) later this year, health experts are warning countries that the world cannot wait until the COVID-19 pandemic passes to take action on climate change, citing rising temperatures and extreme weather patterns, among others.

"Indeed, no temperature rise is ‘safe,’" according to the article.

The article has appeared in medical journals such as "The Lancet," "The New England Journal of Medicine" and the "British Medical Journal," and called upon nations to take action "to keep average global temperature increase below 1.5 degrees Celsius, halt the destruction of nature, and protect health," authors wrote. 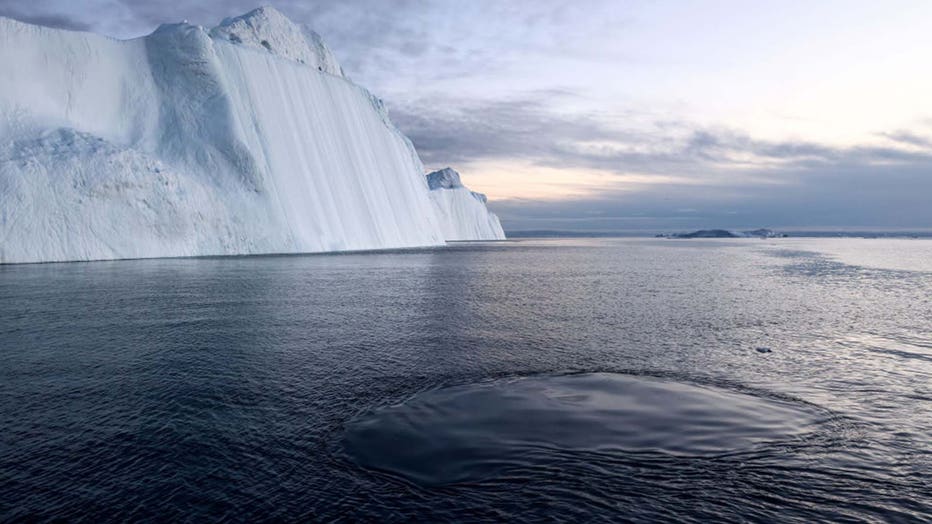 FILE - A flukeprint from a humpback whale who swam nearby is visible on the surface of the water near icebergs which calved amid accelerated rising temperatures from the Sermeq Kujalleq glacier on Sept. 5, 2021 in Ilulissat, Greenland. (Mario Tama/Getty Images)

Increased temperatures are not only a threat to the natural balance of the environment, but health experts are also seeing more heat-related illnesses in patients, according to the article.

"In the past 20 years, heat-related mortality among people over 65 years of age has increased by more than 50%. Higher temperatures have brought increased dehydration and renal function loss, dermatological malignancies, tropical infections, adverse mental health outcomes, pregnancy complications, allergies, and cardiovascular and pulmonary morbidity and mortality," according to the article.

Health experts said that despite efforts by some leaders to cut down on carbon emissions by 2030, those targets are not enough.

"These promises are not enough. Targets are easy to set and hard to achieve. They are yet to be matched with credible short- and longer-term plans to accelerate cleaner technologies and transform societies. Emissions reduction plans do not adequately incorporate health considerations," authors wrote.

Leaders of wealthier countries were called upon to make meaningful, society-wide changes.

"Financing should be through grants rather than loans, building local capabilities and truly empowering communities, and should come alongside forgiving large debts, which constrain the agency of so many low-income countries," the article read.

"We, as editors of health journals, call for governments and other leaders to act, marking 2021 as the year that the world finally changes course," the article concluded.

The warning from health experts comes after a U.N.-appointed panel of experts said that the Earth is getting so hot that temperatures in about a decade will probably blow past the most ambitious threshold set in the Paris accord in early August. That increases the risk of extreme weather and long-term climate-related disasters.

The authoritative Intergovernmental Panel on Climate Change (IPCC) report which was released on Aug. 9, said climate change was clearly human-caused and made more precise and warmer forecasts for the 21st century than it did last time it was issued in 2013.

The United Nations called the potential environmental catastrophe a "code red for humanity."

The report outlines five future scenarios and under each scenario, the world crosses the 1.5-degree-Celsius warming mark in the 2030s, earlier than some past predictions.

"Our report shows that we need to be prepared for going into that level of warming in the coming decades. But we can avoid further levels of warming by acting on greenhouse gas emissions," said report co-chair Valerie Masson-Delmotte, a climate scientist at France’s Laboratory of Climate and Environment Sciences at the University of Paris-Saclay.

The 3,000-plus-page report from 234 scientists said warming is already accelerating sea level rise and worsening extremes such as heat waves, droughts, floods and storms. Tropical cyclones are getting stronger and wetter, while Arctic sea ice is dwindling in the summer and permafrost is thawing. All of these trends will get worse, the report said.

While calling the report "a code red for humanity," U.N. Secretary-General Antonio Guterres kept a sliver of hope that world leaders could still somehow prevent 1.5 degrees of warming, which he said is "perilously close."

"Anything we can do to limit, to slow down, is going to pay off," report co-author Claudia Tebaldi, a scientist at the U.S. Pacific Northwest National Lab, said. "And if we cannot get to 1.5, it’s probably going to be painful, but it’s better not to give up."