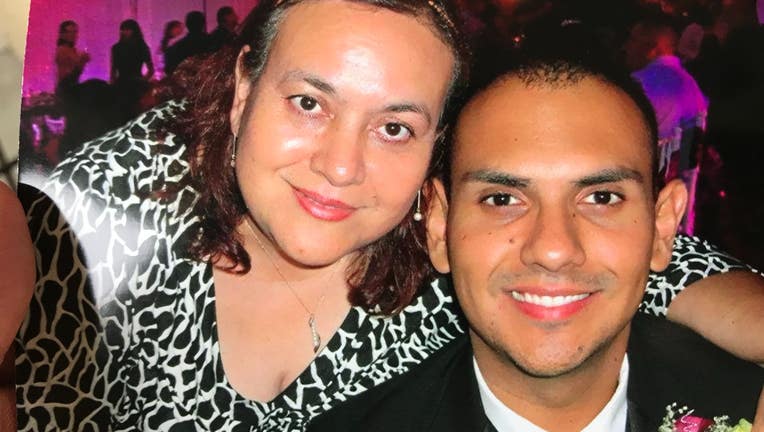 Rosa Garza and her son Francisco Garza were killed by a suspected DUI driver in San Jose.

Two people were killed and five others were injured after a suspected DUI crash early Sunday morning. It happened on the Highway 101 North connector ramp to Interstate 280 and 680 in San Jose.

SAN JOSE, Calif. - Two people were killed and five others were injured after a suspected DUI crash early Sunday morning. It happened on the Highway 101 North connector ramp to Interstate 280 and 680 in San Jose.

Family members identified the two people killed as Rosa Garza, 61, and her son Francisco Garza, 34, both from San Jose.

21-year-old Esteban Aguilar Jimenez of San Jose was arrested for drinking and driving, responsible for killing two people in a post-Thanksgiving holiday crash.

Esteban Aguilar Jimenez, 21, of San Jose, was arrested for driving under the influence that resulted in a deadly crash.

Investigators said around 4:10 a.m. Sunday, Jimenez was driving a Dodge Charger northbound on Highway 101 in San Jose when at the base of the on-ramp to the Interstate 280/680 split, he collided with a Nissan Rogue causing the Rogue to hit a guardrail and roll over. Witnesses told California Highway Patrol he had been speeding.

“They had seen the Dodge Charger traveling northbound prior to the collision and estimated the speeds close to 100,” said Officer Ross Lee of San Jose CHP. “This was a significant impact to the rear of the Nissan Rogue.”

Two people in the Nissan Rogue died out of the seven people total involved in the collision. The rear passenger in the Nissan, Rosa Garza, and the driver, Francisco Garza, died at the hospital.

Garza's sister was sitting in the front-right seat. She suffered minor injuries.

Another passenger in the Nissan and four people in the Charger including Jimenez were taken to the hospital for various injuries.

“The road was wet at the time,” said Officer Lee. “I believe it was raining at that hour this morning. The predominant factors here were the speed of the Dodge Charger traveling at a high rate of speed and intoxication of the driver.”

CHP San Jose said 19 people have been arrested so far this Thanksgiving weekend period in its jurisdiction. Another DUI crash resulted in a death over the holiday weekend.

“There’s a reason we don’t call these accidents. These are preventable collisions, and they’re 100% preventable,” said Ross Lee, a CHP officer and spokesman for the agency’s San Jose office.

“Really to me it's no different than taking a gun and shooting it,” said Mary Klotzbach of Mothers Against Drunk Driving Bay Area. “You're in a weapon that's 6,000 pounds and endangering many lives.”

Klotzbach’s 22-year-old son Matt was killed by a drunk driver. She’s pushing for tougher legislation specifically mandatory ignition interlock devices for all DUI offenders. The devices sample a driver’s breath for a certain blood alcohol level before starting the car.

“Until we get a paradigm mind shift in our culture, oh he had one beer too many, you don't drink and drive,” said Klotzbach.

The Garza family wishes that message had gotten through to Jimenez. Instead they're in their East San Jose home planning two funerals in the midst of the holiday season.

Upon being released from the hospital, Jimenez was booked into the Santa Clara County Jail and was charged with felony DUI and gross vehicular manslaughter.

A Gofundme for the Garza family has been setup.