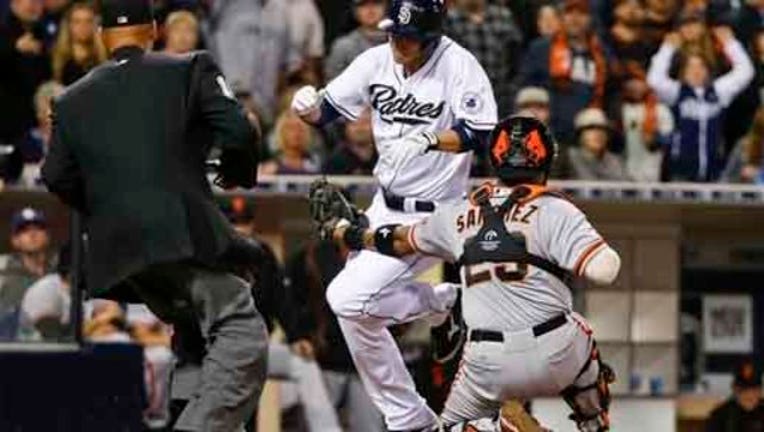 SAN DIEGO (AP) — Wil Myers hit an RBI double off the right-field wall with one out in the eighth inning and Craig Kimbrel got his first save with the San Diego Padres, who beat the San Francisco Giants 1-0 Friday night.

The run snapped the Padres' 22-inning scoreless streak dating to Wednesday night at Los Angeles. The Padres lost 1-0 to the Giants in 12 innings in their home opener on Thursday.

Pinch-hitter Clint Barmes drew a one-out walk off Jeremy Affeldt (0-1) in the eighth before Myers doubled. The throw was up the third base line and Barmes ran into catcher Hector Sanchez's arm before he could field the relay throw from second baseman Joe Panik, knocking his glove several yards down the first-base line. Sanchez was shaken up but stayed in the game.

The Giants had pitched 22 consecutive scoreless innings until the eighth.

Joaquin Benoit (2-0) pitched a perfect eighth. Kimbrel, obtained Sunday in a blockbuster trade with Atlanta, allowed one hit in the ninth before inducing Angel Pagan's double-play ball to end the game. It was the fourth double play turned by the Padres.

Each team had only five hits.

Tim Lincecum, who no-hit the Padres in both 2013 and 2014, allowed an infield single to Cory Spangenberg with one out in the first.

Both teams played great defense. San Diego turned four double plays and the Giants three. After issuing consecutive walks to open the seventh, Morrow struck out Brandon Crawford and then got Casey McGehee to ground into a double play.

Padres second baseman Jedd Gyorko, whose hit into three double plays in two games, made a great over-the-shoulder catch of Gregor Blanco's bloop into shallow center in the eighth.

Giants: Manager Bruce Bochy said Jake Peavy is good to go for his start Sunday. During extra innings Thursday, "Peavy sprinted to the bullpen — I didn't tell him to," Bochy said. "He said, 'I'll be down there if you need me.' That's Jake, trying to help out."

Padres: RHP Ian Kennedy went on the disabled list with a strained left hamstring suffered in the third inning Thursday. Odrisamer Despaigne, who came on in relief of Kennedy Thursday, will take his spot in the rotation.

Saturday night's game will feature a marquee matchup between San Francisco's Madison Bumgarner, the MVP of the World Series, and San Diego's James Shields (0-0, 3.00, who lost twice to Bumgarner in the Fall Classic. "It's hard to be believe it's happening already, this early in the season," Giants manager Bruce Bochy said. "It's good for baseball." Shields, then with Kansas City, lost to Bumgarner in Games 1 and 5. Bumgarner also threw five scoreless innings of relief in Game 7. Shields signed with San Diego in the offseason as part of general manager A.J. Preller's roster revamp.