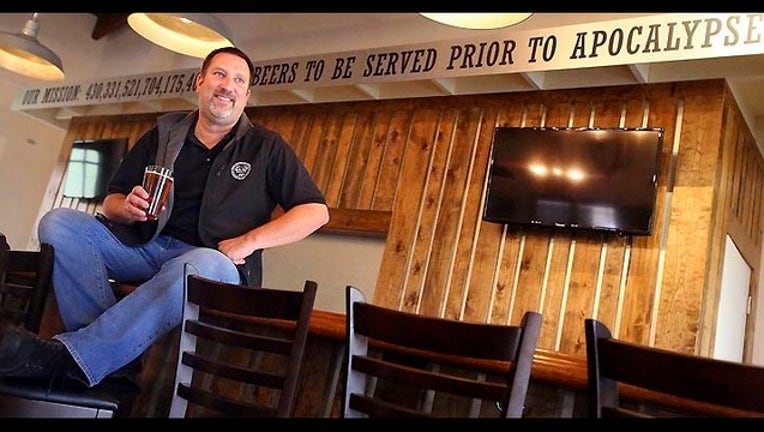 NAPA (AP) -- Robert Dahl came west from Minnesota with a powerful desire to make his fortune in Napa Valley's famed wine country. And it looked like he had succeeded — for a while.

The burly, charismatic businessman had convinced friends old and new to invest millions in wine and beer ventures. He lived the high life: fancy dinners and frequent travel, a hillside home and expensive vehicles. He once bought a $42,000 Harley Davidson motorcycle rather than delay a road trip while another nearly new bike got fixed.

But behind all that seeming success, a bubbling feud with his biggest investor was coming to a head. At noontime Monday, Dahl put a silencer on his .22 caliber semi-automatic handgun and lured the man to his rented vineyard. He chased him through the grapevines with his SUV, then shot him to death in front of police responding to the man's frantic 911 call.

Dahl, 47, then killed himself, leaving behind his wife, three children and two decades worth of failed projects, broken friendships and numerous accusations of financial impropriety in Northern California and Minnesota.

In recent months, Dahl was facing ruinous financial penalties in the $1.2 million dispute with his investor and contempt charges for selling pricy winemaking equipment in defiance of a judge's order. He was hit by four additional lawsuits last year, including one by planning officials who said he didn't get the proper permits to operate his 10-acre Dahl Vineyard.

Some friends speculate that the mounting pressure may have pushed Dahl to murder and suicide. But the violent conclusion to Dahl's Napa adventure came as "a complete shock" to Phil Lutgen, a former business partner who said he considered him a friend to the end.

Dahl arrived in Napa County about five years ago after selling a Minnesota company that created an anti-microbial cleaner to fight mold in construction projects. Dahl boasted of selling the company for $12 million but said he received only $500,000 after the buyers filed for bankruptcy.

The buyers tell a different story and sued him for selling them a company they claimed manufactured a useless product. The case was settled for undisclosed terms.

Dahl ran into criminal and financial problems in Minnesota before moving west. He served a brief jail sentence for felony fraud and he and his wife filed for personal bankruptcy in 1997, according to court records. But more details were not immediately available for the fraud conviction or bankruptcy filing.

After moving to Napa, Dahl launched California Shiners, a company that bottled wine to be sold to customers who added their own labels. One sued Dahl for delivering poor quality wine.

Dahl's many businesses flamed out quickly and ended in acrimonious disputes with financial backers, according to court records and former partners who said Dahl turned controlling and belligerent after receiving their investments.

"He was always trying to work on several projects at once," said Joe Foppoli, whose family bought out Dahl's interest in a Healdsburg winery after deciding they didn't want him as a business partner.

After selling out to the Foppoli family, Dahl was introduced to Greg Knittel, a construction developer, and persuaded him to invest in a new brew pub called Napa Point Brewing.

"He was very charismatic," Knittel said of Dahl. "He could dazzle a room like no one I had ever seen."

Dahl and Knittel opened the pub in October 2013. By March 2014, the landlord alleges in a lawsuit, Dahl stopped paying the rent, which was scheduled to increase from $15,000 to $60,000 a month. Dahl closed the business in May.

Last summer, Knittel and Dahl planned a motorcycle trip to Oregon, when Dahl shelled out $42,000 for a new bike. The trip culminated with the $20,000 purchase of a restored 1926 Ford Model-T truck. It was parked in front of Dahl Vineyards, which grew grapes and made wine on a small scale.

He said Dahl liked to display photographs of $800,000 in cash delivered in a gym bag by former Silicon Valley executive Emad Tawfilis last year as part of the loan.

Dahl told Tawfilis that many of those he did business with preferred to be paid in cash. But after Tawfilis dropped off the cash, he said Dahl stopped making his monthly payments. Tawfilis filed a lawsuit.

The two were meeting Monday to discuss settling the lawsuit when Dahl shot and killed Tawfilis.

On Wednesday, Dahl Vineyards' tasting room was padlocked and an eviction notice taped to the doors, enumerating a long list of alleged lease violations. It was Dahl's latest and last failure.

In applying to lease the property in 2013, Dahl had told the landlord he was earning millions.

"I have made mistakes in my life and I always take responsibility for them and make them right," Dahl wrote the landlord. "I pride myself on doing what I say I do and believe that a man is only as good as his word."