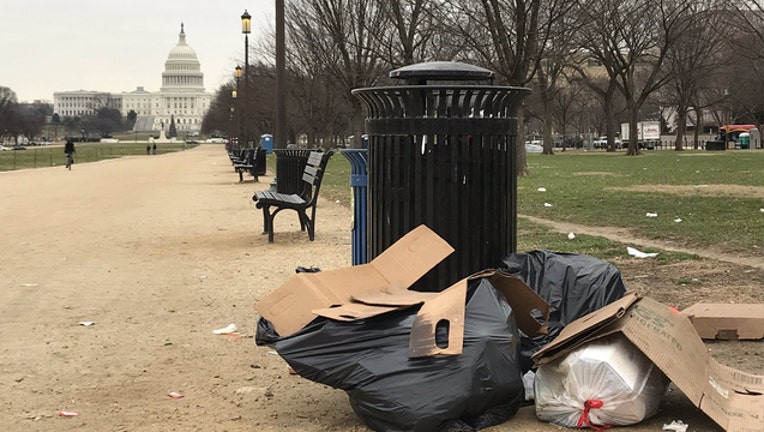 Trash piles up along the National Mall during the government shutdown. (Alnwick / WTTG)

WASHINGTON (AP) - The National Park Service says it is taking the extraordinary step of dipping into entrance fees to pay for staffing at its highly visited parks in the wake of the partial government shutdown.

P. Daniel Smith, deputy director of the service, said in a statement Sunday that the money would be used to bring in staff to maintain restrooms, clean up trash and patrol the parks. He acknowledged that the Trump administration's decision to keep the parks open during the weeks-long budget impasse was no longer workable and so more extreme measures were warranted.

On its website, the National Parks Service says entrance fees are "used to enhance the visitor experience. At least 80 percent of the money stays in the park where it is collected, and the other 20 percent is used to benefit parks that do not collect fees."

Parks have been relying on outside help for security and upkeep.

"We are taking this extraordinary step to ensure that parks are protected, and that visitors can continue to access parks with limited basic services," Smith said.

Democrats want the parks fully opened. But Rep. Betty McCollum of Minnesota, the incoming chair of the subcommittee overseeing Interior appropriations, said Sunday that dipping into user fees was "not acceptable" in this situation, and likely violates the law.

"Instead of working to reopen the federal government, the administration is robbing money collected from entrance fees to operate our national parks during this shutdown," said Theresa Pierno, president and CEO for the National Parks Conservation Association. "For those parks that don't collect fees, they will now be in the position of competing for the same inadequate pot of money to protect their resources and visitors. Draining accounts dry is not the answer."