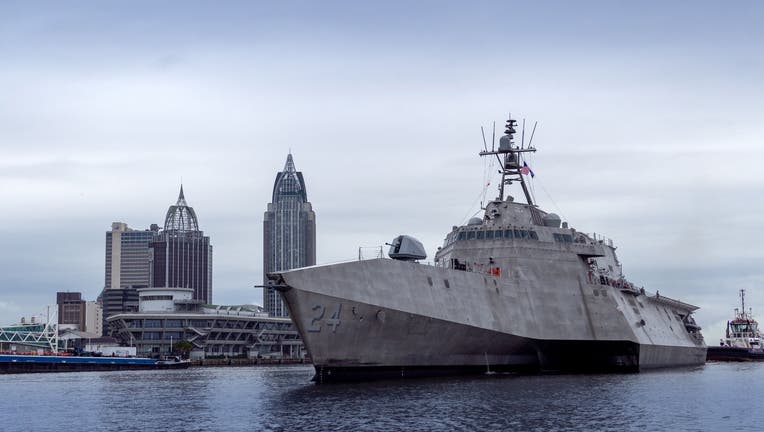 The USS Oakland LCS 24 leaves Austal, an Australian-based global ship building company, in Mobile, Alabama on May 20, 2020 for acceptance trials in the Gulf of Mexico.(Photo courtesy of (CNSF) Commander, Naval Service Forces )

OAKLAND, Calif - The third Navy ship named after Oakland will be commissioned Saturday at the Port of Oakland, Navy officials said.

The USS Oakland will be commissioned at 10 a.m. in a private ceremony but will be livestreamed, which the public can watch.

Acting Secretary of the Navy Thomas Harker will deliver the principal address at the commissioning, which is the act of placing a ship in active service. USS Oakland was christened June 29, 2019.

At that ceremony, then-Secretary of the Navy Richard Spencer said that the work that went into the ship's construction will ensure the USS Oakland "will represent the great city of Oakland and serve our Navy and Marine Corps team for decades to come."

Construction on the second USS Oakland was started by Bethlehem Steel in San Francisco on July 15, 1941, and the ship was launched Oct. 23, 1942.

The newest version is designed for combat missions near the shore but it's also capable of operating on the open ocean, according to the Navy. The ship can defeat such threats as mines, quiet diesel submarines and fast surface craft, Navy officials said.

USS Oakland's home port will be San Diego. The ship will share that location with numerous other ships including the USS Gabrielle Giffords.