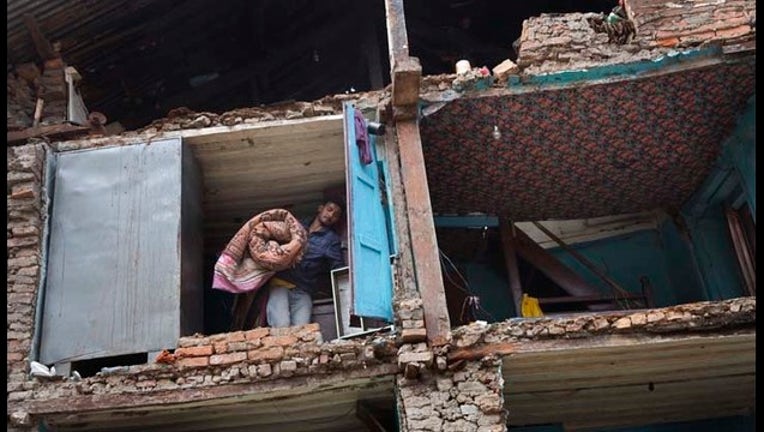 PASLANG, Nepal (AP) — There is almost nothing left of the village but enormous piles of broken red bricks and heaps of mud and dust.

One of the piles was once Bhoj Kumar Thapa's home, where his pregnant wife pushed their 5-year-old daughter to safety in a last, desperate act before it collapsed and killed her during Saturday's earthquake.

On Tuesday, Thapa and others in Paslang were still waiting for the government to deliver food, tents — any kind of aid — to this poor mountain village near the epicenter of the quake that killed more than 4,700 people, injured over 8,000 and left tens of thousands homeless.

"When I got home, there was nothing," said Thapa, an army soldier. "Everything was broken. My wife — she was dead."

He was put on leave from his army unit to mourn, one of the few Nepalese soldiers not deployed in the country's massive rescue and recovery operation. But instead of sadness, there is anger.

"Only the other villagers who have also lost their homes are helping me. But we get nothing from the government," Thapa said.

An official came, took some pictures and left — without delivering anything to the village of about 300 people north of the capital of Kathmandu, he said.

"I get angry, but what can I do? I am also working for the government," Thapa said. "I went to ask the police if they could at least send some men to help us salvage our things, but they said they have no one to send."

Paslang is only 3 kilometers (1.8 miles) up the mountain from the town of Gorkha, the district headquarters and staging area for rescue and aid operations. But the villagers, who have no idea when they might get help, are still sleeping together in the mud and sharing whatever scraps of food they can pull from beneath their ruined buildings. Three people in the hamlet have died.

Officials and foreign aid workers who have rushed to Nepal following the magnitude 7.8 earthquake are struggling against stormy weather, poor roads and a shortage of manpower and funds to get assistance to the needy. On Tuesday, the district managed to coordinate 26 helicopter trips to remote villages to evacuate 30 injured people before a major downpour halted the effort.

"We need 15,000 plastic tarps alone. We cannot buy that number," said Mohan Pokhran, a district disaster management committee member. Only 50 volunteer army and police officers are distributing food and aid for thousands in the immediate vicinity, he said.

"We don't have nearly enough of anything," Pokhran said.

On Tuesday came more tragedy: A mudslide and avalanche struck near the village of Ghodatabela and 250 people were feared missing, district official Gautam Rimal said. Heavy snow had been falling, and the ground may have been loosened by the quake.

But there also was also some heartening news: French rescuers freed a man from the ruins of a three-story Kathmandu hotel, near the main bus station. The man, identified as Rishi Khanal, was conscious and taken to a hospital; no other information about him was released.

Across central Nepal, including the capital of Kathmandu, hundreds of thousands of people remained living in the open without clean water or sanitation more than three days after the quake. It rained heavily in the city Tuesday, forcing people to find shelter wherever they could.

While many across Nepal are opting to sleep outdoors for fear of the constant aftershocks, those in Paslang have no choice because almost no buildings are left standing. At night, survivors huddle together against the cold, rain and mosquitoes, and wait until dawn.

Tilak Bahadur Rana, a farmer, still has a tin roof over his head but the cold rain leaks through.

"In any case, I can't sleep. I am too stressed. I worry about how I will feed my family," he said.

Some in Paslang have seen sacks of food being flown by helicopter to remote regions reachable only by air, without stopping. The arrival in the village of a diesel generator Tuesday, brought by "a nice charity man" from a foreign aid group that no one could identify, brought moments of much-needed elation as dozens crowded around to charge their cellphones on four attached power sockets.

Sitting in the mud and sharing tea made over an open fire with his wife and children, Rana confessed he was losing heart.

"Because of this earthquake, the whole village is destroyed. We need food. We need a place to sleep, or compensation for all we have lost," he said.

Instead, the villagers are pooling anything they can rescue from the ruins, which isn't much: a pile of garlic bulbs, wax honeycombs and some bed rolls, doorknobs, metal pans, and portraits of Nepal's last king and queen.

To help feed his family of 10, Loba Thapa dug into the brick dust that was once an A-frame building where he stored his livestock and food.

Thapa — no relation to the soldier — sifted out some millet and cornmeal, although it still contained powdered bricks, pebbles and livestock dung. Still, it was all the family had to eat.

"I have lost everything. Everything is below the rubble, including my clothes," the 50-year-old said, throwing his hands up in exasperation.

The U.N. said the quake affected 8.1 million people — more than a fourth of Nepal's population of 27.8 million — and that 1.4 million needed food assistance.

The challenge is to reach them in rugged isolated villages. Trucks carrying food were on their way to affected districts outside the hard-hit and densely populated Kathmandu Valley.

Geoff Pinnock of the U.N.'s World Food Program was leading a convoy of trucks north toward the worst-affected areas when the rain began, causing a landslide.

" I can maybe get one truck through and take a risk driving on the dirt, but I think we'll have to hold the materials back to try to get them out tomorrow by helicopter," he said.

The World Food Program said distribution of rice would begin Wednesday in Gorkha district and that the agency plans to provide $116 million worth of food in the next three months.

In the town of Gorkha, rescue helicopters delivered several injured women who grimaced and cried out in pain, unable to walk or speak.

Sita Karki winced when soldiers lifted her. Her broken and swollen legs had been tied together with wisps of hay twisted into a makeshift splint. "When the earthquake hit, a wall fell on me and knocked me down," she said.

Thomas Meier, an engineer with the International Nepal Fellowship, called the disaster "a long-term emergency."

"This will need major attention for the next five years," he said. "People have nothing left."

Associated Press writers Todd Pitman and Binaj Gurubacharya in Kathmandu and Cara Anna at the United Nations contributed to this report.