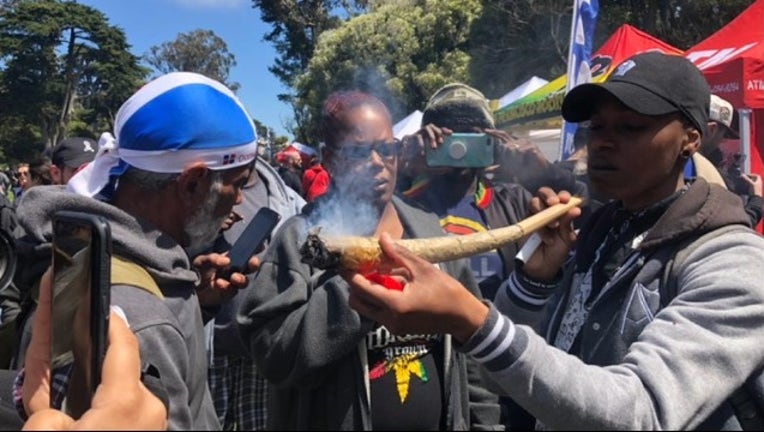 This is the first year celebrations have fallen on a Saturday after recreational marijuana use was legalized statewide in 2016.

Park officials were expecting a large crowd at the adults-only event and worked with law enforcement to set up security around the area. Tamara Barak Aparton, spokeswoman for the city Recreation and Park Department, said celebrations have been "pretty mellow."

There have been four arrests as of 2 p.m., and three were made before the event began for arrest warrants and trespassing, according to Officer Robert Rueca. The remaining arrest was theft-related, and there was one medical transport for conditions that are not life-threatening, Aparton said.

Last year, police said between 10 and 12 people overdosed on fentanyl after purchasing black market marijuana that was laced with the drug. Attendees this year were encouraged to purchase pot legally from licensed dispensaries.

Rueca said the turnout is within expected numbers, and the gathering has been peaceful and comparable to last year, when 15,000 to 20,000 people showed up to Golden Gate Park's Robin Williams Meadow, also known as Hippie Hill.

Traffic closures are in place around the park and the event will conclude at 5 p.m. The park will then be closed off for cleaning.