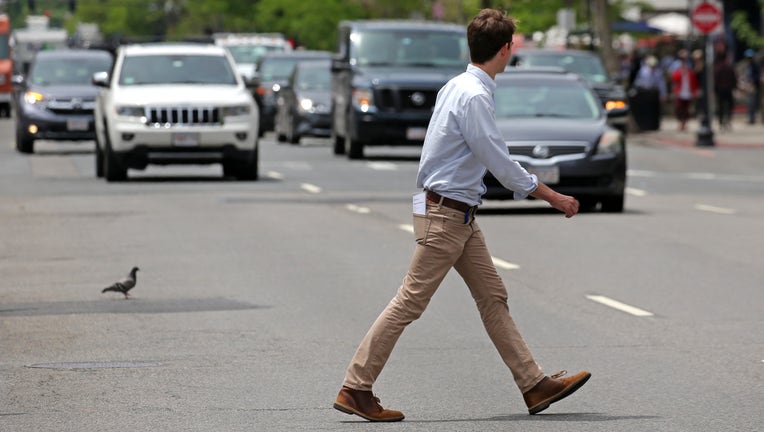 BOSTON, MA - MAY 23: Boston Globe reporter Dugan Arnett crosses Boylston Street trying to get a jaywalking ticket in Boston on May 23, 2017. In Boston, the jaywalking ticket which comes with a fine of $1 has proven so elusive that it borders on myth.

SACRAMENTO, Calif. (AP) - Cheaper abortions, raises for some workers and grace for jaywalkers and loiterers are some of the hundreds of new laws that take effect in California next year.

Democratic Gov. Gavin Newsom signed 997 new laws in 2022 and many of them take effect on Jan. 1 while some go into effect later in the year.

Here’s a look at some of them.

Private insurance companies can’t charge people co-pays or deductibles for abortions anymore. That will save an average of $543 for a medication abortion and $887 for a procedural abortion, according to an analysis by the California Health Benefits Review Program. Lawmakers also did the same thing for vasectomies, but that law won’t take effect until 2024.

California’s minimum wage will jump to $15.50 per hour. That will mean raises for about 3 million workers who earn minimum wage. The increase was triggered by inflation, as required by a law passed in 2016.

A new law will try to stop other states from punishing children who come to California for transgender surgeries and other gender-affirming care. The law will block out-of-state subpoenas and stop health providers from sharing information with out-of-state entities related to gender affirming care, defined as "medically necessary health care that respects the gender identity of the patient, as experienced and defined by the patient." That includes hormone therapy to suppress secondary sex characteristics.

Beginning in January, you can sue someone for sending you "obscene material" against your will. Known as "cyber flashing," this includes nude photos or videos or other material depicting sex acts. A court could award economic and noneconomic damages, plus penalties of between $1,500 and $30,000.

Shuttered stores could soon become affordable housing. Two new laws will open up much of the state’s commercial land for residential development while mostly preventing local governments from blocking the projects. One law will let developers build housing on some commercial land as long as a certain percentage of the housing is affordable. Another law will let developers build market-rate housing on some commercial land, but the projects will still have to go through an environmental review process.

California will release more ill and dying prisoners in 2023. A new law eases the current standard for compassionate release, which critics said was too restrictive. Of the 304 inmates who sought compassionate release between January 2015 and April 2021, just 53 were released by the courts, according to the nonprofit advocacy group Families Against Mandatory Minimums.

Public meetings have always been a place for people to voice their frustrations with government. But the pandemic restrictions have only made those meetings more intense. In 2023, a new law sets rules for when local officials can remove people from public meetings for being too disruptive. The law says the presiding officer can remove someone only after warning them first.

In criminal trials, prosecutors often use the defendants’ words against them. That includes things like rap lyrics, which prosecutors sometimes use to attack someone’s character or connect the crime to gang violence. A new law aims to restrict the use of "creative content" in courts, requiring a judge to first hold a hearing about whether the content is admissible.

California will have three new state holidays in 2023: Juneteenth, the Lunar New Year and Armenian Genocide Remembrance Day. Juneteenth will be June 19th and celebrates the abolishment of slavery in the United States. Lunar New Year is celebrated in Asian countries and coincides with the first new moon between the end of January and and the first 15 days of the first month of the lunar calendar. Armenian Genocide Remembrance Day would be April 24 and would recognize the killing of millions of Armenians in the Ottoman Empire during World War I.

Most workers will be guaranteed at least five days off when a loved one dies. The law applies to government agencies and private companies with at least five employees. "Family member" means spouse, child, parent, sibling, grandparent, grandchild, domestic partner or parent-in-law.

Considering applying for a job but frustrated because you don’t know what the salary might be? A new law in California aims to fix that. Starting in January, companies with at least 15 employees must include the pay scale in all job postings.

A law to ban new oil drilling within 3,200 feet (975 meters) of homes, schools and other community sites is set to take effect Jan. 1, but it may soon be put on hold by a referendum. A campaign organized by oil and gas groups have organized the ballot drive, hoping that voters will overturn the law in 2024. Signatures are currently being verified.