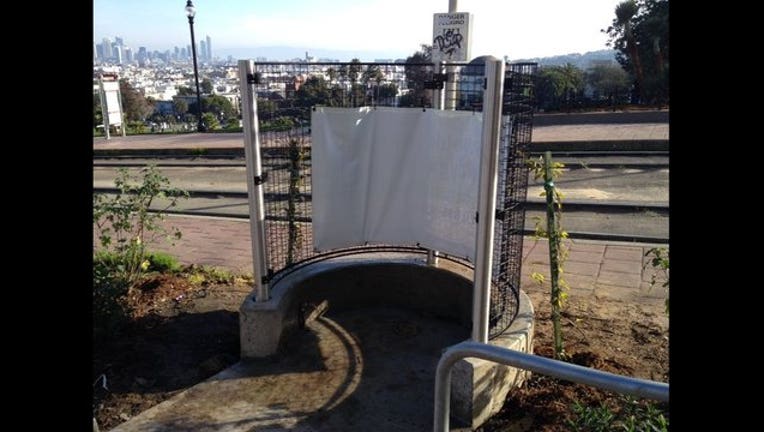 SAN FRANCISCO (AP) — San Francisco's iconic Dolores Park is now home to the city's first open-air urinal, the latest move to combat the destructive scourge of public urination in the City by the Bay.

The concrete circular urinal is out in the open, though plants and a screen offer some privacy. It's a welcome addition for the park that had just three toilets, which led many to relieve themselves in bushes and on buildings.

"Honestly, we were ready to go pee anywhere," San Francisco resident Aaron Cutler told news station KNTV. "So any facility is better than none."

The park now features 27 toilets, including the outdoor urinal, thanks to more than $20 million in renovations. They were the park's first upgrades in 60 years. San Francisco Recreation and Park Department spokeswoman Sarah Madland said she wasn't aware of any other cities with a public urinal.

San Francisco has a long, sometimes creative, history of dealing with public urination. In 2002, the city increased the possible fine for the crime up to $500, but that did little to deter it.

Solar-powered toilets roll through city streets several afternoons a week. And city crews have inspected 10,000 light posts to make sure they won't fall over from erosion. That comes after a three-story-tall light post corroded by a likely mix of human and dog urine, and weighed down by a large banner, toppled.

"Dolores Park has seen an exponential increase in the number of visitors: On a sunny Saturday, it can host between 7,000 and 10,000 people," Madland said. "One of the goals of the renovation was to address the littering and public urination issues that were rampant at the park."

Along with the open-air urinal, attendants are manning 10 public toilets to encourage people to use them. They clean and restock supplies and make sure people don't use drugs or sleep inside the restrooms.

"The more options we can give them to relieve themselves, the better for the parkgoers," San Francisco Supervisor Scott Wiener said. "The better it is for neighbors."