Gov. Newsom announces “Project Roomkey” outside of Motel 6 in Campbell

The governor made the announcement to house all homeless amid the coronavirus pandemic in Campbell on Saturday, April 18, 2020.

CAMPBELL, Calif. - California is on its way to acquiring nearly 16,000 hotel rooms to house the homeless during the pandemic, Gov. Gavin Newsom said Saturday as he reminded people to stay indoors as outbreaks continue to crop up throughout the state.

Standing in front of a Motel 6 near San Jose, Newsom said more than 4,200 people have been moved out of shelters and off the streets into motel rooms. He took the opportunity to scold leaders of unnamed cities for blocking efforts to house the homeless, asking them to “please consider the morality” of their decisions.

“We’ve certainly flattened the curve. The question is when are we going to see those numbers start to decline on a consistent basis as opposed to an episodic basis," he said.

The pandemic that has plunged California — the world’s fifth-largest economy — into recession has hit hard. There are concerns the virus could sweep through the state’s 150,000 homeless people, many of whom have chronic health conditions and lack safe places to quarantine themselves. 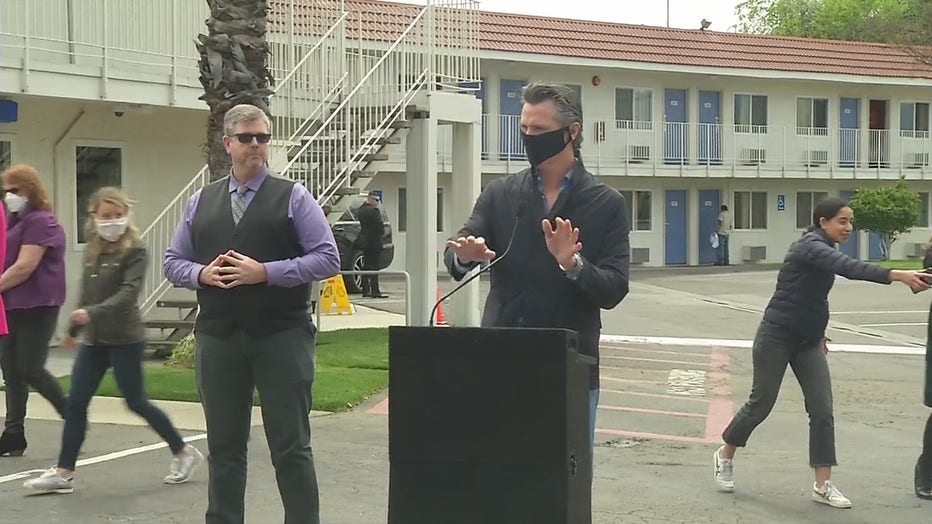 California Governor Gavin Newsom wears a black mask outside of a Motel 6 in Santa Clara County before a noon press conference on Saturday, April 18, 2020.

Newsom, who made solving the state's homelessness crisis a priority even before the pandemic struck, announced Project Roomkey two weeks ago, a project in which the federal government will pay 75% of costs associated with housing some homeless. It covers people who test positive or may have been exposed to the virus, older homeless people and those with underlying health conditions.

Among the more than 100 homeless people in an undisclosed hotel on the west side of Los Angeles are two residents who are in hospice care, said Va Lecia Adams Kellum, chief executive of St. Joseph Center in Los Angeles.

“Because of Project Roomkey these men are inside a comfortable room where they can get the comprehensive and palliative care they need and die with dignity,” Adams Kellum said in an email.

Meanwhile, the nonprofit continues to offer to-go meals and groceries for the needy.

Governor Gavin Newsom spoke at noon on Saturday, April 18, 2020 outside of a Motel 6 in Santa Clara County.

While praising municipalities that have stepped in to find temporary housing for the homeless, Newsom said Saturday there were “equivalent number of cities” that are blocking efforts to help the homeless. He wouldn’t name them.

“Please consider the morality of those decisions, consider the moment we’re in and the ethical question you’re being called and asked upon, consider your station in life and in history. All of us will be judged,” Newsom said.

Los Angeles County prosecutors requested an emergency hearing with a federal judge Friday, alleging the cities of Lawndale and Bell Gardens threatened to terminate city permits for hotels and motels participating in the program.

Laguna Hills in Orange County is also pushing back against plans to move homeless people into a hotel, the Los Angeles Times reported Thursday.

In Los Angeles, where more than 30 homeless people have tested positive for coronavirus, medical teams will begin screening people for the virus on the streets, along with fast-result field tests, Mayor Eric Garcetti said. Those who are infected will be offered transportation to shelters and have hotel rooms set aside for them.

So far, San Francisco is the only city in California to report a large-scale outbreak at a homeless shelter, after more than 100 people tested positive, including 10 staff. None of the people was seriously ill when tested, but three have since been hospitalized, public health spokeswoman Rachael Kagan said.

The state also reported for the first time Friday that there are 3,500 confirmed cases, or about 12% statewide, in nursing homes or adult care facilities, where infections have spread quickly.

There have been signs the outbreak is slowing in the month or more since most of the state’s 40 million residents were ordered to stay at home. Social distancing rules are being praised for that development, but they have hit the economy hard, shutting down schools, tourist spots and most restaurants and retail businesses.

But some have chafed under the restrictions, including several dozen people who rallied in San Diego on Saturday against California’s stay-at-home order.

Newsom said he wasn’t opposed to the demonstrations but urged protesters to practice physical distancing while exercising their free speech. 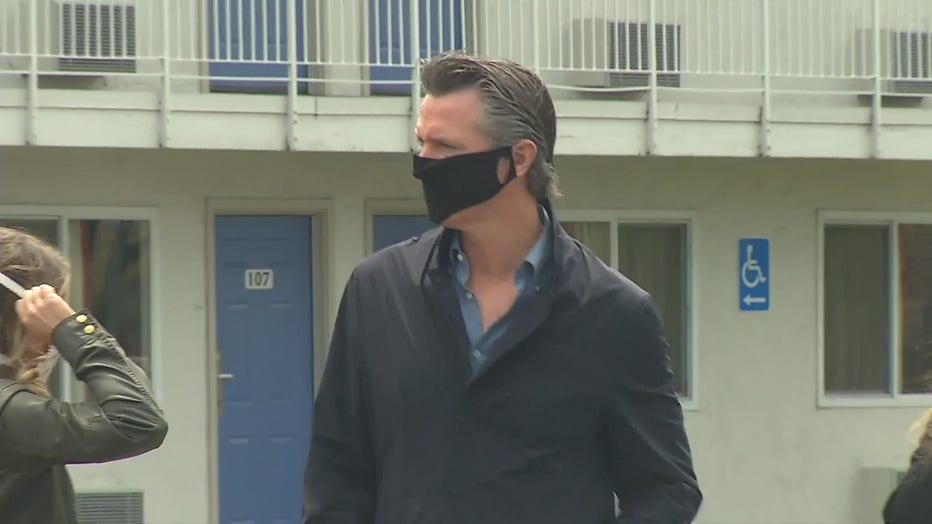 California Governor Gavin Newsom wears a black mask outside of a Motel 6 in Santa Clara County before a noon press conference on Saturday, April 18, 2020.

“This virus knows no political ideology. It doesn’t know if you’re a Republican or a Democrat,” he said.

To start lifting restrictions and allow businesses to reopen, Newsom has said the state needs to test 25,000 people a day and better track those who are infected, up to about 20,000 a day now. Several areas have begun offering tests to people without symptoms. Until now, there’s been a shortage of test swabs and the chemical agents needed to process the tests.

“While California has excelled in so many categories, we have not in testing,” Newsom said Saturday in an online conversation with former President Bill Clinton.

“Right now, we’re not even close as a nation, let alone as a state, to where we should be on testing,” he said.

"We cannot do this alone as a state, we're sort of building the plane but someone else has to fly it," Newsom said. "It's the counties that really lead this effort and it's the cities that need to support this effort."

He praised Santa Clara County and others for working proactively to shelter the homeless, but said an equal number of jurisdictions have actively blocked measures that could help vulnerable residents.

"Homeless individuals are members of our community, people that are a paycheck away from losing the capacity to have that key and lock and a place to call home. I hope we'll consider their lives and future as well," he said.

Newsom held the news conference outside a Motel 6 location, along with Board of Supervisors President Cindy Chavez, Supervisor Susan Ellenberg and San Jose Mayor Sam Liccardo.

Liccardo said over 500 homeless individuals have been housed in Santa Clara County so far, and pushed for Congress to support local jurisdictions with a second iteration of the Coronavirus Aid, Relief, and Economic Security Act during the ongoing pandemic.

"We don't want these rooms simply opened for a few weeks, or a few months," Liccardo said. "Let's give counties and cities the dollars they need to purchase motels so we can really aggressively address the homelessness crisis that will be here well beyond the time that this pandemic passes."

As of Saturday, Newsom said the state has "flattened the curve" of COVID-19 cases, but the region is not yet safe from the virus. Hospitalizations increased 1.3 percent overnight, and the state recorded 87 deaths - among the highest since the crisis began.

"For those that think we're out of the woods ... those that think we can go back to the way things used to be, I caution you on the basis of that 87 number," Newsom said. "The question is, when are we going to see those numbers start to decline on a consistent basis, as opposed to an episodic basis as we have seen in the last week or so."