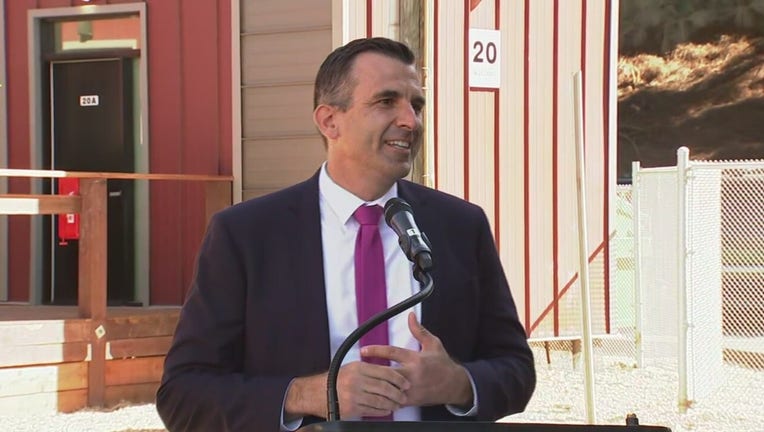 SAN JOSE, Calif. - In normal times, it takes years and years to find enough political capital and money to build housing for the homeless.

Coronavirus, and state funding, is changing that.

On Friday at a news conference, San Jose Mayor Sam Liccardo proudly talked about three new centers that will house 300 people in four or five months, which will cost $85,000 a unit, compared to the average price of $700,000. Funding for the communities came from the State’s Homeless Housing, Assistance and Prevention Program (HHAP) and from the City’s CARES act allocation.

"The best solution for homelessness is housing," Liccardo said. "It costs too much and it takes too long."

Gov. Gavin Newsom marveled at how fast the project was moving along and was impressed that people will be moving into the units in the next few days and weeks.

San Jose is embracing the money and the message of Project Homekey which was originally meant to shelter homeless people during the pandemic. Mayor Sam Liccardo proudly talked about three new centers that will house 300 people in four or five months, which will cost $85,000 a unit

As a result of the pandemic, Newsom launched Project Homekey, the state’s $600-million program for buying and rehabilitating housing, including hotels, motels, vacant apartment buildings and other properties. The idea is to convert them into permanent, long-term housing for people experiencing or at risk of experiencing homelessness. The program requires that cities and counties share part of the costs.

And on Friday, Newsom announced another $200 million for the effort.

The Bernal Monterey Emergency Interim Housing Community was made possible by the pandemic.

And as a result, Christopher Pisano, who had been homeless for a year, now has a bed.

"It probably cut my stress in half. My health issues are I have asthma and chronic bronchitis so if I get COVID-19 that's it. I probably will not survive it," says Pisano.

The plan is that these modular units will stay long after COVID is gone.

"It's all about building a bridge to permanent housing," says Stephanie Demos of Home First Services, operator of the site.

And while a more traditional housing project would have taken four years, this one off Bernal Road, took four months. There are two similar sites in the works.

"We see what's happened to this state as it relates to the issue of homelessness. We recognize our responsibility to do more. And we are building capacity and partnerships that never existed," Newsom said.

There were more than 9,700 unsheltered people in Santa Clara County last year, a number only made worse because of the coronavirus pandemic.

At the same time, the Milpitas City Council voted unanimously to sue to stop Extended Stay America in the city from being converted into permanent supportive housing for homeless people, the Mercury News reported. This was a $29.2 million project to buy the 146-room hotel.

The governor's response, "I get the pressure you're under, but you're going to look back on your life and you're going to regret this." He adds, "It's a moral damn moment. Do the right thing." 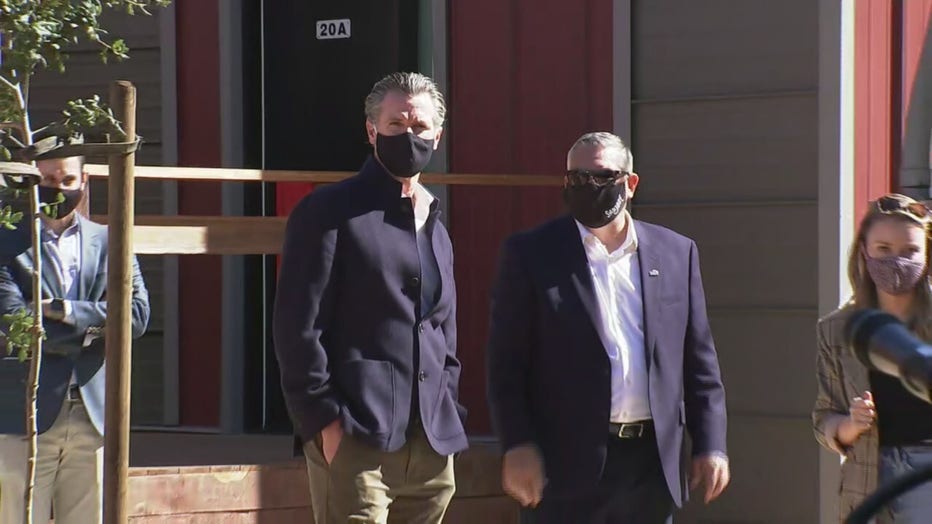 Mountain View also had received $12.3 million to buy land for 100 manufactured homes for temporary housing as part of Homekey.

For people like Sandy, these projects have been life-changing, getting her off the streets after six years.

In September, Oakland was highlighted for getting $20 million to buy Clifton Hall, a California College of the Arts dormitory in Rockridge that offers 63 units for seniors and families; and $10 million for Project Reclamation managed by Bay Area Community Services, or BACS, for the development of 100 units at 20 various sites throughout Oakland for families and individuals.