A San Francisco nonprofit leader was attacked Friday morning with a wooden plank and taken to the hospital for treatment of non-life threatening injuries, police say. One suspect, who is homeless, is in custody. Community leaders in the area say homelessness has spread to their neighborhood and is leading to an uptick in crime.

SAN FRANCISCO - An attack on a well-known community leader Friday outside the Ella Hill Hutch Community Center in San Francisco has prompted calls for the city to do more to protect residents from violence.

The executive director, James Spingola, told friends that he had been asking two homeless men to move away from the center, where children were attending summer activities. Instead of complying, the men attacked him.

"They jumped him and hit him with a 2x4 on his head," said Rev. Amos Brown, President of the San Francisco NAACP and pastor of Third Baptist Church in the Western Addition.

Brown says he talked with Spingola and learned Spingola is suffering from swelling on his head.

Police said they responded to the 1000 block of McAllister Street just after 11 a.m. on the report of an aggravated assault.

"Officers arrived on scene and immediately saw there was a victim and suspect. That suspect was being detained by the victim and witnesses," said San Francisco Police Dept. spokesman Officer Robert Rueca, "Both the victim and the suspect were transported to the hospital."

Those who know Spingola were shocked by the attack.

Wright and others say they understand the difficulties of being homeless, but they feel the situation with tents lining the streets around the Western Addition and some people being violent or disrespectful of the neighborhood has gotten out of control.

"It's been bad. It's been really bad, cause if you go down this street there's a park right down here. They have a lot of people that's being homeless just hanging out in the park right there," said Wright.

"Our investigators are trying to find out what motivated the suspects in this assault. We want to make sure the community knows we are on alert, we are looking for an additional suspect who is still outstanding," said Officer Rueca.

Rev. Brown says it's time for the city to take action against those who refuse the many homeless services and shelter options in the city.

"For those who refuse to take services, we feel we should not tolerate their bad behavior," said Rev. Brown.

A photo of Spingola with his injuries was posted online to a Gofundme site to help raise funds to help him while he recovers.

Rev. Brown says a meeting is scheduled next Friday at Third Baptist Church with community leaders, city hall officials and the police chief to discuss the issue. 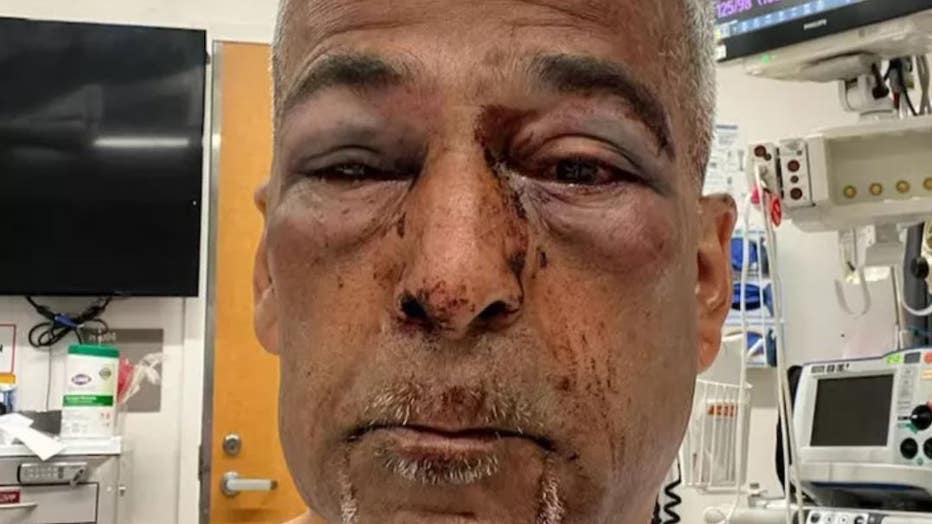 Photo of James Spingola taken from a Gofundme web page.

Rev. Brown expressed his anger and frustration. He said, "The entire Black community is under siege by the homeless issue." In a press release following the incident, he demanded more action from SFPD. He also wants accountability from city leaders including the board of supervisors. He said he'd like to see the return of ‘Care not Cash’ programs.

"We have been besieged in recent weeks by crime, theft, drugs, and danger," Brown said. He claimed homeless people climb onto the roof of Third Baptist Church to use drugs and that last week, one of the church's vans had the catalytic convertor stolen.

"Our streets are littered with needles and feces. They smell of urine and degradation. We need to help these people, we need to help our city, and we need to hold homeless people and our leaders accountable," said Brown.

A Gofundme has been organized on behalf of Spingola.